On Good and Evil
The Greatest Showman (2018): Movie Review

From The Archive - Nishi 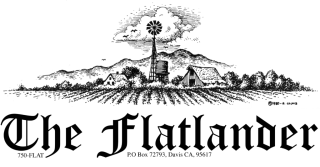 The flatlander published the below article before shortly before the community voted against the Nishi project measure A only 2 years ago. With Nishi 2.0 on the ballot this spring, The Davisite is publishing this article to begin the conversation on this very controversial project.

The Nishi Proposal
By Robert Milbrodt

In our form of government, citizens are the masters and government is the servant.  Yet, the City of Davis has long had these roles reversed.  Measure J, adopted by voters in June 2000 and renewed as Measure R in June 2010, was meant to encourage the City to adopt a deliberative community process.  Such a process would engage citizens throughout any planning process that anticipates significant changes to our town.  At the end of this community driven process, voters would then be asked to collectively ratify or reject their own work product.  That’s democracy.

What would a democratic planning process have looked like regarding Measure A?

The Nishi proponents say this project has been in the planning pipeline for 8 years.  How has the City found the time and money for an insular process with the developers, but failed to find the time or money to invest in a community process to get this right?  Consider all of the conflicting statements surrounding Measure A, and ask yourself, why wasn’t the community engaged to answer these issues through its General Plan?

Housing-- If Nishi is considered a good housing location, why does the project offer so few housing units?  Why do the proponents exaggerate with the claim the project will add 1,500 beds?  The project provides 440 apartments and 210 condominiums.  Given the current apartment supply (about 10,000) and vacancy rate (less than 1%), these units will not significantly alter local rents.  But, is that the community’s goal?  If so, why isn’t it in the general plan?

Infill-- The Nishi property is not infill.  It is not in the City of Davis, and therefore unable to minimize city service costs by taking advantage of existing infrastructure.  In fact, the unique location requires extraordinarily costly new infrastructure, which has been offered without a plan for managing its long term repair or replacement.

Air Quality-- Many are worried about the prospect of creating housing in an area where Professor Tom Cahill declares the air will be unfit to breathe.  Why wasn’t the community asked to devise a policy on air quality standards or mitigations?  Isn’t this something that should be resolved at the beginning rather than at the end of a planning process?

Whenever government presumes to know what’s best, the people are bound to suffer.  Sure, the City holds open meetings and receives public comments.  But, it is not the public that drives that process or its outcomes.  Those outcomes are predetermined by bureaucrats, developers, and council members who believe they are empowered to speak for us, rather than to speak and act on our behalf.  This has even triggered some individuals and groups to meet with developers to strike their own deals.  This is the process that lands us with the shortcomings at Nishi and the Cannery, and leaves us holding the bag on $650 million in unfunded City liabilities.  Is this any way to plan or run a city?  Davis deserves better.

Mr. Milbrodt is a 39 year resident of Davis. He researched and wrote the first draft of what became Measure J.