Amend Measure R? Will Candidates come clean on how they want it amended?
Wes Anderson's The Isle of Dogs: Movie Review 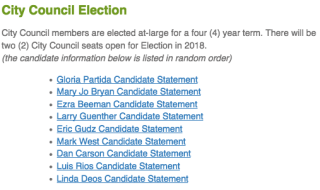 I totally agree with Roberta’s criticism about the candidates for city council refusing to be more specific and with specific reference as to how they stand on Measure J/R and if they want to amend it, how precisely would they amend it.

However, I would like to broaden this discussion to make observations about the ways in which almost all candidates for city council have campaigned since I moved here in 2000. A trend that was apparent when I arrived here has become more and more pronounced.

To put it bluntly and simply, almost all candidates are reluctant to, or more accurately often refuse, to discuss specifics especially when it comes to some of the most important and controversial issues. Their reasons for doing this are obvious. They think by appealing to as broad a constituency as possible, and not alienating any one constituency, they are maximizing their appeal and their chances of election. I could cite endless examples from the campaigns of several of our incumbent council members.

On no issue are candidates more unwilling to be specific than on land use issues, one of the areas which local government (at least at the moment) retain some of their greatest power. More specifically, they are invariably fuzzy and vague when it comes to the knotty and eternal issue of how much and in what ways Davis should grow in terms of building new housing and relatedly of projects associated with these developments.

I do not have time to quote from the campaign literature of all nine council candidates, but suffice it to say that with few exceptions most candidates spout vague generalizations re their solutions or policies that border on blatant obfuscation. The electorate really does not know where they stand on “the growth issue” let alone how they will act if elected to a FOUR year term. This is incredible given the serious and immediate growth issues that Davis faces.

Instead most candidates try to woo voters by writing and talking of some mix of the following: their experience, if any, in city governances; their relevant professional experience; their education; their business acumen and expertise; their endorsement;, their ties to Davis et al. et al. They then get their supporters to repeat most of this, and their policy generalizations, with glowing character references included in a letter to the Davis Enterprise.

Briefly and selectively, for now, let me be specific in what I’d like to know from all the candidates:

Excellent questions for the Candidates. I would very much like to hear all of them answer.