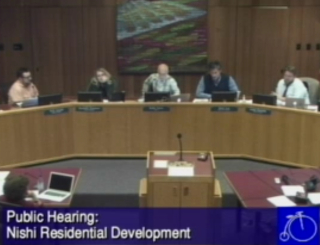 Expensive and glossy mailers from the Nishi developer (paid for by "Davis Gateway Student Housing LLC & Affiliated Entities") have begun arriving at Davis addresses. The back of the mailer touts support from "local leaders we trust." These leaders are said to include the five current members of the Davis City Council.

But how strong is the support of those Councilmembers? Let's review some excerpts from their comments from the meeting where the Council voted to put Nishi on the ballot on 2/6/2018. The video is located here. Numbers in parentheses refer to the approximate time that the Councilmembers' words appear in the video.

Edit 4/30/2018 to add an edited version of the full video, containing just the clips where City Council members disparage Nishi 2.0.

"For better or for worse, it's near the railroad track which is a source of pollution absolutely, it's also a source of a lot of noise... I think the air pollution issues are, that mitigations can be done which will reduce the risk. But I do believe that that site does have air quality challenges."

"I was a little disappointed to see the change from 1.0 to 2.0 and some of the loss in innovation."

"... I'm not sure that anybody is %100 totally satisfied with Nishi 2.0. I know I'm not entirely satisfied with it. For me I think still I think Nishi 1.0 was superior in many ways particularly vis-a-vis smart growth principles, higher density, mixed use, both residential commercial and R&D spaces, nearly 30,0000 square feet previously proposed, the mixture of rental and for-sale housing."

"This is a reduced project from the project that we had in front of us 2 years ago and like others on the council have said there was a lot of things I liked about Nishi 1.0 that I'm lamenting aren't part of this project, in particular the innovation piece. This was seen from our Innovation Park Task Force as The. Best. Location in town for this small incubator innovation site. So the fact that's not part of this project? Sure, that gives me a little bit of nostalgia, sadness."

The members of the City Council have endorsed Nishi 2.0, to be sure. But these clearly aren't ringing endorsements.

And I have to ask: If Nishi 1.0 was better than Nishi 2.0, as several of the Councilmembers suggest, and Nishi 1.0 was defeated at the ballot box, why is Nishi 2.0 on the ballot at all? Why should we vote in favor of an inferior project?

Why should we vote in favor of an inferior project?

Because it's better than no project at all.

Well, some of us didn't buy that argument the first time around, and we're certainly not buying it the second time around with an inferior project and the same health-harming bad air quality.