Wes Anderson's The Isle of Dogs: Movie Review
The Nishi Project (Together with Other Projects) Will Hurt Air Quality Downtown 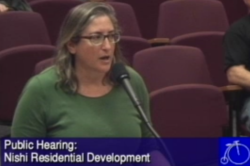 But my point here is a different one. When I read the ballot arguments in favor of Nishi 2.0, I am taken back to the day that the City Council voted to put Nishi 2.0 on the ballot. I am reminded of the passion of the students who spoke that evening. That passion caused me to change my planned comments and to instead speak from the heart, not about the students who were there that night, who were well-informed about the project, but the students who were not there. Here are my comments in full. They are not as well-organized or as well-articulated as I would like, but they are sincere. And they still reflect the core of my objections to Nishi 2.0.

Hi, I'm Roberta Millstein. I'm a member of the Open Space and Habitat Commission, also Professor at UC Davis, but I'm here speaking for myself.

First, I just want to say, as a professor, how thrilled, and I really mean thrilled, that I am to see so many students here participating in the civic process. It's great to see, it's great to see their activism. And I am very sensitive to the housing plight that they're under.

But what I have to think about, especially as someone who is going to be here for a long time, are the students five years out, ten years out, and what I'm really thinking about is what they don't know. Because one of the things I've heard is that, well, there's a risk, but we're taking other risks, and we want to balance the health risks against these other risks we're taking and we'll make a choice about where we want to live.

What I'm thinking about is what those students five years out and ten years out won't know.

They won't know that measurements were not actually taken at Nishi, they were only taken near Nishi.

Again, all the students here are part of this conversation. They all know that. But in the future, people won't know that.

They won't know that they need to keep their windows closed.

They won't know that they need to keep their filters running and maintained.

They won't know that they shouldn't get pregnant.

They won't know that if they have any pre-existing conditions, like asthma, or a heart condition, that they shouldn't live there. And not everybody knows that they have those conditions.

They won't know that they should only live there for a limited amount of time, and by the way, they shouldn't live in any place afterward that has impaired air, because that's just adding to their long term exposure.

They won't know that they are potentially putting themselves at risk for heart disease, and for asthma, and for cancer. And these are serious things.

So I am seriously concerned about informed consent, that in the future people will not know that they are making a choice, that they are weighing one risk against another. There are a lot of things they [won't] know.

There are a lot of assumptions being made here about the mitigation is supposed to work, and a lot of those are questionable. If people don't know they have to keep their windows closed, then that filtration is not going to be helpful. The developer is encouraging people to bike back and forth. They won't know that they shouldn't actually be exercising outside at Nishi.

So, at a minimum, I would urge you to do the studies that Dr. Cahill has recommended and find out what our worst-case scenario is.

(The video of the meeting is online here. My comments are at approximately 4:15).