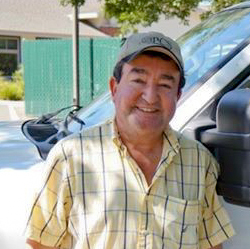 I would like to thank the citizens of Davis and the Natural Resources Commission for this environmental recognition award. I would also like to thank all the citizen volunteers, some who I worked with, who have participated with the various environmental groups around town and campus. Your work is important and an integral component of the community’s sustainability effort.

I find it ironic that the institution that basically drove me and the former Integrated Pest Management program out, was now sponsoring an award for my efforts.

I first came to Davis 40 years ago as a student in the College of Agriculture and Environmental Sciences, graduating in 1983. Since then I have been fortunate to work in this field throughout my career. One of my first agricultural jobs was at the Hunts Cannery as a seasonal field representative coordinating harvest with the farmers, truckers and the cannery. I then volunteered in the Peace Corp in Ecuador for a few years returning to California to work in the emerging organic produce industry.

During this period there those who voiced their doubts about the organic agriculture – “the yields are too low; the quality is bad and it’s too expensive...” I faced these same concerns applying some of the same techniques to urban IPM. But the success of these sustainable techniques demonstrated that alternative IPM methods work and applying them to the urban environment posed no barriers. Instead esthetics, functionality and safety are the standards by which the program is measured. Achieving these standards and a reduction of herbicide and pesticides is an accomplishment that I would not have achieved without the help and input from maintenance staff - those orange vested or blue shirt guys on the roadways and parks.

This is what I am most proud of, especially serving the community that I live in and am a member of.

During my 10 years of service with the City there were at least 5 city managers and 8 immediate supervisors who were responsible for implementation of the IPM policy. Constant management turnover led to some discontinuity of the program and its support. When the IPM program was cut to a half time position there was an immediate spike in herbicide & pesticide use. The city council, then led by mayor Joe Korvosa, reinstated the position to full time. Returning to applying the existing IPM policy resulted in a return to stability in the department and further moves toward reaching our ultimate goals.

This came to a screeching halt two years ago when the political climate changed – nationally and locally. Disregard for minorities, the environment, science and transparency are self-evident, again, nationally and locally. The effort to undermine the IPM policy began with an unofficial decree by Parks Management to disregard the IPM policy in place. What resulted was misapplication of herbicides & pesticides and spraying of formally prohibited areas such as playgrounds and school areas. Residents took notice and complained resulting in citizens forums and eventual rewriting of the IPM policy.

I personally was targeted with disciplinary action known as PIP (Performance Improvement Plan) - basically a gauntlet of demands challenging my integrity by having me obey orders that violated policy, not to mention laws and regulations of the Dept. of Pesticide regulation.

I strongly believe this could have been avoided (and money saved) had the original policy, while not perfect, had been implemented. The new policy is more burdensome and bureaucratic, requiring input from an advisory committee and unnecessarily lengthy evaluation of any herbicide & pesticide product used. If the simpler, yet effective original policy, was not followed, it was evidently clear that the new “IPM 2.0” would not move us closer to the widely expressed goals of all residents: the reduction and where possible elimination of herbicides and pesticides globally accepted as harmful.

Adding insult to injury, there is now a move to seek an increase in taxes to finance this on-going wastefulness and inefficiency.

Finally: my last day working for the city following my resignation was a sad one: I cross the street to Public Works to say good-byes to staff I’ve worked with for many years. With hope that it would help, I shared my thoughts to the manager of the Environmental Working Group (EWG), my opinion on how management could have better handled the IPM program. Upon returning to my office, I was called in by the parks superintendent’s office. He said he had just got a call from the EWG manager saying that I was “trash-talking” about management. He then ordered me to charge my remaining hours to vacation time and leave. I didn’t question it, took my remaining belongings and left forever.

Council members and commissioners come and go but a core of upper management stays and remain under the radar continuing business as usual.

If the City of Davis, once again, aspires to be at the forefront of environmental issues, inclusiveness and diversity, using a Trump-ism, the swamp must be drained.

Again, I am grateful for my nomination and recognition in this award. A sincere thanks to all the citizen volunteers who have and continue to participate with groups around town and campus. Your work is important and an integral component of the community’s sustainability effort.

I had the honor of working with Martin in my capacity as a commissioner on the Open Space & Habitat Commission with respect to the changes in IPM Policy that he mentions. I was continually impressed with his professionalism, his depth of knowledge, and his dedication to doing what is right for the City and for the environment. What was done to him is nothing short of a travesty; the City should be ashamed. There seems to be little or no oversight to prevent a talented and valuable employee from being abused in this way. This needs to change. I'm sorry, Martin. This should not have happened to you.

And I agree with Martin about the new IPM Policy; it "is more burdensome and bureaucratic, requiring input from an advisory committee and unnecessarily lengthy evaluation of any herbicide & pesticide product used." Yet the City patted itself on the back for a job well done, in spite of Commissioner protest from me and from members of the Natural Resources Commission. For shame.

I'd say vote for the 2 council candidates who have the guts to stand up to City Staff and to investigate the finances ( and financiers) involved: Ezra Beeman and Larry Gunther. (upcoming measure R). They are also the only 2 who want the community to decided what new lands will be developed with what kinds of projects. Check out the letter by Desmond Jolly in today's (May 18) Enterprise.

My congratulations to Martin Guerra for your dedication, hard work., and sharing your knowledge which no doubt led to your award of recognition. How sad and how unfortunate your good work ended as it did. Thank you for sharing this information.

You have been a vital addition and a positive voice for a community best known for an ongoing, active participation in the betterment of our community and the world around us.

While I now live in Sacramento, Davis is my hometown, and I shall always appreciate the level of respect for environment which characterizes this
Thoughtful community.