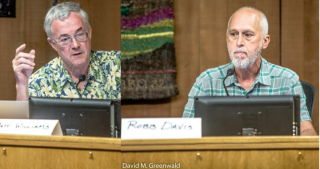 As follow-up to the May 6th CivEnergy forum on Measure J, I published my personal reasons why I oppose Measure J as an article for the Davisite and as a comment to the Vanguard.  Prompted by my list, Mayor Davis took the time to respond to all eleven (11) of my comments one-by-one.  I thank Robb for doing so, and particularly thank him for the structured format he used to reply. This is the second in a series of articles on Nishi's financials in which I respond to Robb Davis's replies to me.  The first article is here.

Robb: Non-sequiter. Two very different projects, one with revenue from commercial activity, unsecured property tax, sales tax. I am not sure the point of this statement. It is less. It is a housing-only project.

The absence of a commercial component impacts two revenue categories, Business License Tax and Community Services Revenues, which are down $48,000 and $61,000 respectively

The biggest revenue decrease (50% of the total) comes from Council’s removal of the $635,000 aggregate Community Services District revenues from the Development Agreement.

Bottom-line, 62% of the revenue decrease is not because of any differences between the projects, but rather because City Council (and the FBC) chose not to bargain with the developer with the same vigor they bargained with in 2016. The result is the Davis taxpayers are forced to pick up the fiscal difference.

Robb: Correct. In the original Nishi project the FBC recommended a CFD (CC put forward a CSD instead) OR having the developer be responsible for maintenance. In this version we opted to have the developer pay for the maintenance.

I’m glad to see that Robb freely acknowledges that the $635,000 of annual Community Services District revenue has vanished. I won’t belabor that point; however Robb is 100% wrong when he says that “the FBC recommended a CFD (CC put forward a CSD instead) OR having the developer be responsible for maintenance.”

Where Robb is getting confused is because Dan Carson arrived at the January 2016 FBC meeting with a 12-page memo of his personal thoughts on the Nishi financials, and on pages 9 and 10 of his memo Dan talks extensively about the merits of a CFD at Nishi.

Any possible FBC recommendation of a CFD for Nishi died a swift death when the FBC unanimously agreed with information that Ray Salomon and I presented. Our two separate/individual analyses showed the Nishi representative, Tim Ruff, that to borrow $8 million his closing costs could/would be between 1% and 2% (between $80,000 and $160,000 rather than $2 million) and his interest rate would be between 3% and 4% rather than 6%. On a 30-year loan that meant the difference between an annual debt service payment of $725,000 and an annual debt service of between $410,000 and $460,000. The annual debt service reduction of between $315,000 and $265,000 works out to $400.00 per unit … each year for 30 years. Tim Ruff thanked the FBC and the subject of a CFD to build the Nishi 2016 infrastructure was never discussed again.

In order to address the $106,000 annual deficit presented in the initial EPS analysis, the FBC recommended an aggregate set of three additional revenue components, the largest of which was given the work-in-process name Community Services District (CSD). The CSD approach (1) proposed by the Finance and Budget Commission, (2) validated by the EPS/Plescia/Goodwin consulting team, (3) in conjunction with staff and (4) the City Attorney, and (5) mutually agreed to by the developer and City Council (under the modified name of a “Land-Secured Financing District”) had the same fiscal impact as a CFD, but was a proactive maintenance of homeowner/taxpayer value rather than a retroactive give-away to the developer. And it accomplished it with 0% closing costs rather than 20% closing/reserve costs and 0% annual interest rate rather than 6% annual interest rate.

The reason that the EPS/Plescia/Goodwin consulting team liked the CSD (Land-Secured Financing District) approach was that it brought the Effective Tax Rate (ETA) for the Nishi project up to the same level of taxation as The Cannery. Unfortunately, in the Nishi 2018 negotiations/agreements, City Council has chosen not to include a CSD. Until Robb’s comments here in the Vanguard on Saturday, no member of Council has explained why they have chosen not to do so.

In his explanation Saturday, Robb said (Note: I have bolded certain sentences for emphasis).

City shall diligently pursue Richards/I80 interchange improvements, provided, however, that the City Council shall determine whether it has the available funds to construct the improvements prior to construction. City and Developer shall attempt to leverage local funds with SACOG or grant funding.

Developer shall own and be responsible for all maintenance of roadways and pedestrian/bicycle infrastructure within the project area, and shall grant the City full public access rights over said facilities in a manner that is acceptable to the Public Works Director. The privately owned and maintained roadway, bicycle and pedestrian facilities shall be built and maintained in accordance with City standards or as otherwise acceptable to the Public Works Director.

Robb is correct in his citation, which brings up two important points.

This MOU is a statement of broad policy objectives and interests of the parties and is not intended to create any contractual commitments of any party. The parties acknowledge that there are no express or implied agreements herein and no party has any obligation to pursue any of the matters described below.

What is the “win” for UCD? UCD suffers from a housing shortage for its ever growing enrollment. I’m in the process of working with Student Housing to show the size of that shortage on a year by year basis. With the enrollment growth trend of 1,000 additional students per year, that housing shortage has gotten significantly worse in the past five years, and will get even worse in the years to come. Every parent who decides where their child will go to college factors lots of pieces of information into their decision process when choosing between schools. Availability (and safety) of housing is one of the key factors. The higher the probability that their child will have to commute from non-Davis housing to UCD every day, the greater the probability that they will choose either (A) not to apply to UCD, or (B) not to actually go to UCD when actually accepted. Lost students means lost revenue. A meaningful (and persistent) increase in lost students means a diminished reputation for the University. Housing that is only 0.5 miles from the UCD Quad, with no commuting safety concerns (crossing Old Davis Road being the highest risk interaction point, is a very low transportation risk, high quality mitigation to UCD’s housing shortage.