Are the Woodland Daily Democrat, the Davis Enterprise, and the Sacramento Bee to be trusted in their endorsements?
In CA, it's not too late to register and vote!

UCD can, and needs to provide far more on-campus housing 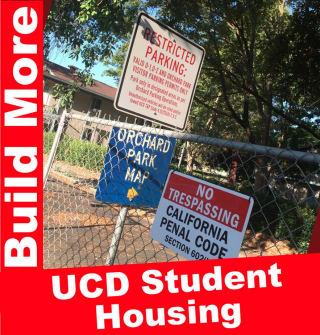 The problems include an insufficient amount of student housing proposed (i.e. the City Council’s recommended “50/100” plan was not included) as well as the astonishing lack of many basic details including: 1) timelines of housing to materialize, 2) inadequate student housing densities, and 3) a failure to recognize and acknowledge the significant impacts environmentally and on the City’s infrastructure due to UCD’s shortfall of beds proposed. The proposed LRDP would continue shifting the majority of their student housing burden onto the City.

UCD has been given plenty of input from a variety of sources since UCD invited input for their LRDP update in fall 2015. A common theme was that UCD needed to add far more on-campus housing on an accelerated timeline to catch-up with the backlog of on-campus housing that UCD has neglected to provide for almost three decades.

Another united message was that UCD needed to include the “50/100” plan in its LRDP update.  This refers to the need for UCD to provide on-campus housing for at least 50% its total student population and 100% of its new incoming students. The “50/100” plan was advocated for in four resolutions including the Davis City Council, the Yolo County Supervisors, the ASUCD student Senate and the Sierra Club, Yolano Group as well as a community petition.  The “50/100” plan is a reasonable expectation of UCD because it is the largest UC in the system with over 5,300 acres and a core-campus of over 900 acres. However, UCD has historically provided the least amount of on-campus housing, second only to UC Berkeley.  However, even UC Berkeley has recently announced that they plan to double their on-campus student housing with higher density housing on-campus within a decade.

In 2002 the UC system gave UCD direction to UCD to produce 38% on-campus housing by 2012, and the 2003 UCD LRDP was to provide 39% by 2016, yet UCD is still floundering at 29%. Meanwhile UC Irvine (UCI) has 44% on-campus housing and soon reach 46% and the new student housing rents at 10% below market-rate. If UCI can accomplish this, why not UCD? Using public-private partnerships (P3’s) and much higher-density on-campus housing is the solution. Yet, UCD demolished Webster Hall, at great expense, only to go from three to four floors –a lost opportunity to densify and add many more student beds.

Furthermore, six other UC campuses have all committed in their LRDPs to provide 50% on-campus student housing for their total student population, while UC Santa Barbara and Cal Poly SLO are also providing housing for 100% of new incoming students.  These state universities recognize that on-campus housing is the only way to control student housing costs long-term. In contrast, off-campus market-rate housing costs cannot be controlled and will continue to rise, so it is not a long-term solution.

UCD brought on the student housing shortage due to an irresponsible lack of planning. Former Chancellor Katehi launched the self-directed “UCD 2020 Initiative” to recruit 5,000 addition students, 4,500 of which would be non-residents (international and out-of-state) to extract triple tuition from them. However, UCD neglected to provide the needed infrastructure in place first, including building enough on-campus housing, more classrooms, and adding more faculty and staff. Instead, UCD initiated the massive increases in the UCD student population which exacerbated the already overcrowded campus and classes resulting with many students unable to graduate in four years, costing them more in tuition and rent, and causing even more rental housing demand.

UCD’s inaction to build adequate on-campus housing while massively increasing its student population has resulted in UCD pushing 71% of its student population off-campus annually.  UCD has only been providing 29% on-campus housing despite having massive core campus acreage. Our City has been housing around 63% amounting to over 20,000 students in a small city of only 68,000 total residents. This has caused a disproportionate number of students living in Davis’ 11,000 apartments and pushing our families and local workers out of city rental housing.  Compounding the problem, rather than building the apartments needed on-campus, UCD has been “master-leasing” Davis apartments depriving the City of property tax on any property UCD owns or leases in Davis (i.e. UC is tax-exempt).

As UCD kept pushing more and more students off campus, rather than then building the needed housing on-campus, mini-dorms started emerging bringing traffic and parking impacts. Next the private sector started proposing mega-dorms with the exclusionary design of predominantly 4- and 5- bedroom apartment “suites” with a bathroom per bedroom. This does not help to provide the needed rental housing for our families and local workers. At $1,000 per market-rate bed monthly like at Lincoln40, this is not affordable student housing.

Currently, there are least five mega-dorms in the City pipeline adding up to 4,578 student-oriented “beds” proposed in Davis. This includes projects such as Sterling Apts., Lincoln40, Plaza 2555 and now the enormous Nishi 2.0 proposal which would be 2,200 student beds. If all of these mega-dorm projects are approved, Davis’ population will increase from 68,040 to 72,618 from students alone, which does not include the population increases from over 1,400 additional housing units being proposed in the city.

Nishi, for one, is a seriously flawed proposal in so many ways including: 1) its terrible location for housing being sandwiched between I-80 and the railroad tracks, 2) the “unavoidable and significant impacts” on health due to the poor air quality defined in the Draft EIR, 3) the significant costs to taxpayers, 4) traffic impacts from 700 cars, and 5) many unresolved issues such as there is still no City-County tax sharing agreement, and still no legally binding agreements for access to UCD, nor with the railroad for an underpass.

The obvious question is why was Nishi 2.0 even placed the June ballot with all of these unresolved issues? Also, since the one of the Nishi developers (John Whitcombe) is a Tandem Properties partner as well (i.e. Tandem owns over 1,900 Davis apartments, some “master leased” to UCD) and currently charging high rents, does anyone believe that the Nishi’s luxury student market-rate apartments will be “affordable”?

Furthermore, Nishi will not help improve the vacancy rate since clearly UCD is still trying to avoid taking responsibility for their massive student population housing needs by not implementing the “50/100 plan”.

Clearly, the more student-only projects the City provides, the more UCD will continue to stall and “dial back” on what they will actually build. The inadequate UCD LRDP proposal is evidence of that.

Meanwhile, our City’s families and workers are being pushed out of City housing since UCD forces the vast majority of their students off campus annually, impacting our City housing significantly. Additionally, mega-dorms have enormous impacts on our City’s infrastructure like water, wastewater treatment, City services and the related costs. Our City already has significant budgetary problems, so we should not be subsidizing UCD which has the land and resources to provide much more sustainable, high density on-campus student housing. This would significantly reduce the commuting impacts on the City by allowing students to live closer to their classes. The City instead needs to be building rental housing for all, like 1-,2- and 3-bedroom traditional apartments providing housing for families, workers as well as students.

UCD has claimed that it wants to be a “good neighbor” and it would reach out to include the City with its LRDP process. But UCD has not been a good neighbor. UCD has declined invitations by the City to have substantive discussions of the student housing issue impacting Davis and neighboring cities, and declined appointing UCD representatives for a City-County-UCD (2X2X2) committee.

UCD has taken advantage of the City for almost three decades since the 1989 Memorandum of Understanding. UCD has made clear with its recently released inadequate LRDP proposal that it wishes to continue the opportunistic relationship it has imposed on the City for years, which has also been a disservice to its students. If all of the other UCs can provide 50% on-campus housing, there is no excuse why UCD can’t, particularly being the largest UC in the system.

Now is the time to give your feedback to our local leaders that we are counting on them to stand up and take action for what is in the best interest of our community. That begins by the City having a legally binding agreement with UCD which includes all of the conditions defined by the City Staff’s recent letter to UCD regarding the many inadequacies of the UCD LRDP update proposal, and for UCD to include the “50/100” plan.

To review the UCD documents see campustomorrow.ucdavis.edu. Please send your input supporting City staff’s letter and emphasizing that UCD needs to add the “50/100” plan to its LRDP update at environreview@ucdavis.edu and to President@ucop.edu,  chancellor@ucdavis.edu, CityCouncilmembers@cityofdavis.org  and clerkoftheboard@yolocounty.org   May 29th  deadline.  For more info please see citizensplanningdavis.org and contact me at citizens@dcn.org or (530) 756-5165.

Eileen has brought together years of incredible analysis of the flaws of UCD housing policy into one concise article about how to understand the problems created and ignored by the UCD's proposed Long Range Development Plan.
I do not agree with the criticism of student housing at Nishi, but it re-enforces the point that UCD students should live within walking distance of the core campus. The UCD LRDP must include the City of Davis demand for an improvement from 29% of the student body housed on campus to a UC-wide standard of 50% of the student body housed on campus. For the LRDP to leave that gross policy discrepancy out is a fatal flaw. If you read Eileen's analysis, you probably will send a comment to the President@ucop.edu that UCD is just as bad as it was with the previous chancellor when it comes to the campus working with the resident city that it imposes great problems of traffic and inadequate housing.

Eileen Samitz post is a powerful indictment of the University's failure to be a good neighbor. Heck, it has not even been a good University to many students and families given that it throws the students off campus after their Freshman year and allows predatory housing practices to force them into 12 month leases at market rate.

Time to shape up, UCD! Please try to do as well (or better) than the sister campuses regarding housing such as the campus just to the south of us: The University of California... Berkeley.