No air pollution testing at NISHI? Gimme a break! Not testing is just a public health and public policy sin..... and totally non-scientific.
Signs Swept Away 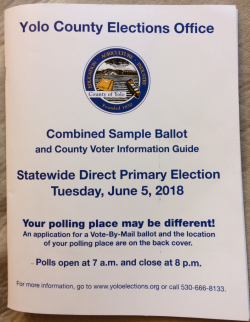 Having taken a day off to reflect, here are some of my thoughts about the election just completed.

First and foremost, let me assure everyone that the Davisite will continue! Some have speculated that this blog was created just to promote Nishi. That was never the case and time will show that to be true. If there have been a lot of articles about Nishi, that was because many of our current authors (myself included) were very engaged in that issue. The Davisite was always intended to be a blog by and for Davisites, which means that our content will always reflect our authors.

So, now is a good time to reissue a call for authors: send us your thoughts, be they political or not, artistic or not, funny or not. You can be a regular author, or send us something from time to time, or maybe just once – long or short, it doesn't matter. (But remember that on the Internet, most people don't want to read things that are very long!). The sidebar contains our contact info and comment policy, the latter of which serves as guidelines for authors as well.

Having said that, I doubt anyone will be shocked to learn that I am disappointed with many of the election outcomes, yes, particularly Nishi and also the DA race (with the caveat that we might get a surprise when all the ballots are counted, though I am not expecting this). For Nishi, the biggest losers are, unfortunately, not those of us who voted "no" but rather the residents who will suffer the health impacts of living in that location and those who will bear the financial burdens as well. I won't replay all of those arguments or the ways in which the "yes" side was able to ignore the scientific and financial realities, but just say that I am saddened. It is no loss to me personally but it will be hardship on those least able to afford it, just as Dean Johannson's (apparent) loss most hurts those who can least afford it.

And I can take some comfort in the fact that we live in a place where citizens' rights to determine the nature of the place that they live are recognized in the form of Measure R. It's an imperfect democracy to be sure, when the developers who stand to profit from the project can outspend the opposition by more than 10 to 1, pitting professional promoters vs. grassroots community organizers. We do need to get money out of politics.  But people voted, and that decision must be respected and even praised. (No praise for the thousands who didn't vote -- turnout was very low for this election, I'm sorry to say).

As for the Council race, my preferred candidates didn't win, but I will be keeping a hopeful eye out to see that the our new councilmembers Gloria Partida and Dan Carson -- both of whom are amply competent and passionate about the issues that motivate them -- work to serve all of Davis's citizens and not just those who elected them. In a race with nine candidates, this seems a necessity.

Lopez handily defeated Prieto. I am grateful for that.

Today is the last day of school for UCD and the DJUSD and things will get a little quieter around town. Time to put metaphorical pen to paper and send us your thoughts.