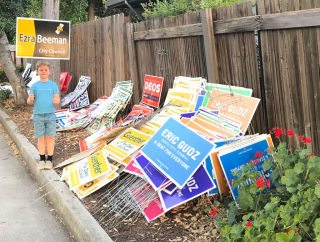 Davis has a tradition that at the end of every City Election, all parties involved work together to sweep up the campaign signs from all corners of the City. It is a refreshing idea that no matter how hard fought the campaigns may be, the day after the election they all work together to clean up the town and signs are returned to the campaign from whence they came.

This Year Council Candidate Linda Deos organized the pickup and all but one City Council campaign participated. Linda assigned each campaign a portion of town and each campaign sent volunteers out yesterday to sweep clean the signs. Despite the one campaigns non-participation their signs were picked up too and overnight, it is as if no electioneering had happened on the lawns of Davis.

Once the signs were picked up, they were brought to the Methodist Church sorted, and left available for pick up by the campaigns.

Not all Davis residents were thrilled with the rapid sign removal. One resident posted on Facebook that they were upset about having their original Nishi “No on A” sign removed. Noting that they had kept it for 2 years since the last Nishi vote,  and that it should have been obvious that they wanted to keep it. Another resident was chaffed that her gorgeous hand painted “Josh Jones for Governor” sign was plucked from her home. I have personally located both signs and will return them to their owners.

Perhaps the adrenaline was still pumping just a little bit too much for all the campaign volunteers who were not sure what to do next now that the election had come to a close, but surely everyone was just trying to restore the City's lawns to order.

By yesterday evening the Dan Carson and Gloria Partida Signs had already been picked up from the church by their campaign perhaps to save for an election 4 year in the future. I spotted Zeke Beeman picking up the last of the Beeman signs for his dad yesterday evening too. With Beeman’s strong showing after a very late entry into the race he does seem a likely future candidate. Meanwhile, a Large pile of multi colored Eric Gudz signs are still leaning against the fence this afternoon.

Even if not used in a future election, the plasticore signs preferred by most Davis candidates are recyclable. A local girl scout troop is also picking up some leftovers that they can re-purpose to help advertise cookie sales.