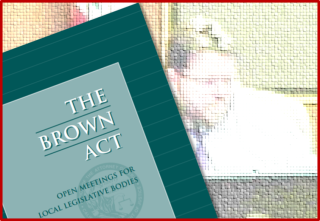 Short answer, he may have. Long answer, if he did he probably violated it in more than one way.

Yesterday Council Member Lucas Frerichs made an enthusiastic endorsement of an upcoming development project on his Facebook page and tagged every other member of City Council and several members of the Planning Commission. It was covered on the Davisite here. 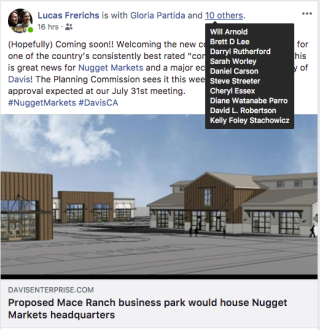 But this project has not even been to the Planning Commission yet, and is on its way to the Council sometime in the future after that. This is clearly business that is within the subject matter jurisdiction of the City Council, and Frerichs clearly indicated his favorable position. Further, by tagging every other member of the City Council in his post, Frerichs clearly intended for all of them to see how he would vote.

California has a specific law that governs how local legislative bodies conduct business, and it applies to the City Council and all its members including Mr. Frerichs. This law, the Brown Act, is intended to guarantee open government for all the citizens of California.

In my opinion Mr. Frerichs likely violated at least 2 provisions of the law.

Note, “(1) A majority…, SHALL NOT, outside a meeting …, use a series of communications of any kind… to discuss, deliberate, or take action on ANY ITEM of business that is within the subject matter jurisdiction of the legislative body.” That is pretty sweeping. Tagging every member of the Council is undoubtedly a majority. “Communication of any kind” certainly includes Facebook posts. A new development is definitely part of “any item” of business.

Secondly, Mr. Frerichs did not even make this a public post. If you look at the screen shot, just after Lucas Frerichs’s name you can see an icon with 2 little heads. This indicates this is a personal post and is not globally visible. I for example cannot see the post when I look at Mr. Frerichs’s page.  I only see posts with a little globe icon indicating a public post.

Mr. Frerichs is having communications with the rest of the City Council that are not readily available to the public.

The Brown act deals with this too. From the attorney general’s pamphlet on the Brown Act:

"Where matters are not subject to a closed meeting exception, the Act has been interpreted to mean that all of the deliberative processes by legislative bodies, including discussion, debate and the acquisition of information, be open and available for public scrutiny. (Sacramento Newspaper Guild v. Sacramento County Bd. of Suprs. (1968) 263 Cal.App.2d 41; 42 Ops.Cal.Atty.Gen. 61, 63 (1963); 32 Ops.Cal.Atty.Gen. 240 (1958).)"

Mr. Frerichs is clearly engaging in semi-private conversation with the rest of the council that includes discussion, debate, or the acquisition of information.

In my opinion that is likely a second violation of the Brown Act.

Mr. Frerich’s has served the community on City Council for 6 years and has surely had Brown act training, but it still seems unlikely that he would commit Brown act violations intentionally. None the less this is very serious and poses a challenge to the integrity of our City government.