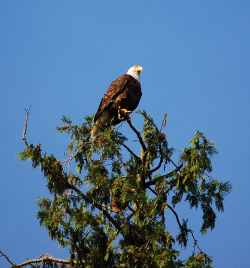 There are important lessons to be learned from the case of the bald eagle.  The Endangered Species Act (ESA) – now under threat itself – is important, but as the bald eagle shows, we have to use all the tools available to us at the local, state, and national levels to protect endangered and threatened species.

The iconic bald eagle is considered a success story of the ESA, although the truth is a bit more complicated than that.  Before the ESA was passed in 1973, the bald eagle was covered by preceding legislation such as the 1918 Migratory Bird Treaty and the Bald and Golden Eagle Protection Act of 1940.  Two other actions are considered crucial to the recovery of the bald eagle in the U.S.: the banning of the pesticide DDT in 1972 and the subsequent importing of eagles from Canada to the U.S. in the 1970s.  Together, these protections and actions allowed the bald eagle to be removed from the list of endangered species.

Although the bald eagle still has some protections within the U.S., its delisting under the ESA does present some challenges; for example, prime bald eagle habitat can be developed on without facing legal challenge.  Thus, we should not rest on our laurels too much, even for a success story like the bald eagle.

Moreover, at the national level, the ESA is under attack.  As the New Yorker summarizes:

Last week, the Trump Administration proposed what the Times called “the most sweeping set of changes in decades” to the regulations used to enforce the Act. The changes would weaken protections for endangered species, while making it easier for companies to build roads, pipelines, or mines in crucial habitats. Under current regulations, government agencies are supposed to make decisions about what species need safeguarding “without reference to possible economic or other impacts.” The Administration wants to scratch that phrase. It also wants to scale back protections for threatened species—these are one notch down on the endangerment scale—and to make it easier to delist species that have been classified as endangered.

These attacks on the ESA coincide with attempts to chip away protections for particular species, as I wrote about previously concerning the grey wolf.  Yet the grey wolf could so easily be a success story, too, with California’s only known existing wolf family, the Lassen pack, having now produced its second litter of pups.  This is a sign of the increasing success of the grey wolf in the west.  We need to press our legislators to hold fast on the ESA, and perhaps even more importantly, support environmental organizations such as the Center for Biological Diversity and the National Resource Defense Council that will lead the legal charge to protect the ESA.

At the state level, Senators De León and Stern introduced SB-49, the California Environmental, Public Health, and Workers Defense Act of 2017.  Among this Act’s provisions are explicit actions to take in order to “ensure no backsliding as a result of any change to the federal Endangered Species Act of 1973.”  In other words, we need to take action at the state level to fill in for what we cannot count on at the national level.  (Similarly, grey wolves have been listed as endangered in the state of California).  In light of the recent federal challenges to the ESA, the NRDC is promoting a writing campaign to California’s state assembly members, urging them to support SB-49.  It’s a short form to fill in and an easy action to take.

At the local level, Swainson’s hawks and burrowing owls (for example) are frequently part of development discussions and environmental impact analyses.  Swainson’s hawks are listed as threatened in the state of California; burrowing owls are not, although it has been argued that they should be, with their local status seeming particularly precarious (instead, they are listed as a “species of special concern”).  Some disparage these environmental analyses as anti-development, but the plain fact of the matter is that if we continue to destroy the habitat for these species, chipping away at it one project at a time, they will go extinct.  In other words, while it might seem easy to dismiss the impact of any particular project, the collective impact of such dismissals is clearly cumulative.  You can support organizations such as the Burrowing Owl Preservation Society and Tuleyome to take action locally.

These should not be seen as separate efforts, but rather as part of an interconnected effort to preserve endangered and threatened species.  Artificial political borders present a danger for all living creatures.