May Actually Cost the City Money on an Annual Basis, and The Development Agreement Is Non-Binding and Weak

by Alan Pryor and Pam Nieberg

Part 1. The City has Granted the Developer Massive Giveaways and Subsidies by, among other things, Reducing Project Impact Fees by over $3.4 Million Compared to Fees Normally Charged to New Developments.

The Davis City Council has approved a sprawling senior housing development project located in West Davis along Covell. Voters will have a chance to approve or reject the project in this year's November ballot. The project is called the West Davis Active Adult Community (WDAAC).

The City Council has agreed to development-related fees in the Development Agreement for this project that, in all but the market rate non-age restricted housing units, are generally from 25% - 60% less than the current mandated fees normally required of other development proposals. This has resulted in essentially a give-away to the project proponent of approximately $3.4 million in fees which is a discount of more than 40% compared to fees that would otherwise normally be charged to a developer for a project with this number and size of units as shown in Appendix A.

The City has claimed that this discount is based on: 1) the reduced average number of occupants the Developer states will be living in each unit. 2) the promise that most of the costs for services for which fees are assessed are primarily dependent on the number of individuals expected to be living in the units.

However, these claims have not been verified by the developer or the City. This claim of reduced residents also ignores the fact that each of the senior single family detached units also has the option to add an additional caretaker unit before or after construction and that all of the senior units can also have minor relatives or unrelated adults living in them under some circumstances.

Alternately, one could surmise that because of the design and location of the WDAAC development, most impact fees should be higher than otherwise charged to a normal development in another location closer to city amenities.

This discount in fees might be socially justifiable if only applicable to the low-income housing units if they were run by a non-profit entity, but all of the other for-sale units will be sold at market rates based on then applicable market conditions. The developer is going to sell them at the highest prices he possibly can so a dramatic reduction in development fees simply represents a transfer of money from City budget to the developer’s pockets and will not be reflected in any actual sales price to a senior. This is grossly unfair to the other residents and Davis taxpayers who end up subsidizing the developer’s profits on the project.

For instance, the City is requiring a minimum amount of work to be done on Covell to accommodate the development - essentially moving some curbs or islands and re-striping – that costs comparatively little compared to, say putting in an off-grade crossing such as was required at the Cannery or Nishi. Yet WDAAC will be given a credit of almost $1.8 million for this relatively small amount of work as shown in the Development Agreement; as follows:

Developer’s Roadway Impact fee obligation for residential and non-residential uses shall be deemed satisfied through the construction of traffic/roadway improvements identified in Exhibit F, Transportation and Circulation Commitments.”

This $1.8 million credit given to the developer was after the normal fees were already discounted more than 50% from the otherwise normal roadway impact fees of almost $3.8 million that should have been charged. This decision creates a very bad planning precedent for future developments.

Even more egregiously, though, the developer is being given credit for a number of other required development improvements to lower the already reduced Park Fees that have nothing to do with Parks. These “Parks” fee giveaways are disclosed as follows in the Development Agreement:

Developers' Quimby Act obligation is partly satisfied through the combination of the Project's publicly accessible and privately maintained turn-key parks (dog park: 0.83 acres, three parklets (0.54, and tot lot: 0.50 acres), land dedication for the City’s peripheral trail (1.22 acres), and three-to-one credit for the land associated with the Activity and Wellness Center and the non-nexus bicycle and pedestrian improvements to Covell Boulevard (Quimby credit for 1.3 acres) which both provide recreational benefit to City residents. In total, Developer shall receive credit for 4.39 acres toward its Quimby Act obligation. Developer shall be responsible for its remaining Quimby Act obligation for 0.35 acres which shall be fulfilled through payment of fee not to exceed $250,712.” (Emphasis Added)

(Note: Cities and counties in California have been authorized since the passage of the 1975 Quimby Act to pass ordinances requiring that developers set aside land, donate conservation easements, or pay fees for park improvements. Revenues generated through the Quimby Act cannot be used for the operation and maintenance of park facilities. The goal of the Quimby Act was to require developers to help mitigate the impacts of property improvements. The Act gives authority for passage of land dedication ordinances only to cities and counties.)

So, amazingly, in addition to giving an unprecedented and outrageous-sized credit against their traffic impact fee obligations for the modest bike path and traffic improvements on Covell, the City is granting the developer another credit for these same improvements against their Quimby Act obligations for recreational improvements. This is clearly double-dipping by the developer and it is hard to imagine how this could be justified by the City negotiators to further reduce already negligible “recreational benefits.”

Additionally, the “Activity and Wellness Center” is supposed to include a for-profit restaurant, a fitness center, some small retail, a “Transit Hub,” and a very large public parking lot to accommodate public visitors to these for-profit facilities. With the exception of the completely undefined “Transit Hub,” this “Activity and Wellness Center” is functionally a private benefit undertaking, yet the City is justifying the waiver of some of the already-reduced “Parks” Impact Fees by claiming these provide “recreational benefits for City residents.”

These reductions in impact fees are not fair or equitable and represent egregious violations of the public trust. This is an abusive developer give-away and functionally amounts to the subsidization of developer profits by Davis taxpayers. This unfortunately sets a very bad precedent for all future developments in Davis.

The authors will shortly publish Part 2 of this article in which they disclose how the City projects a positive annual return to City coffers as a result of build-out of this project. However, this estimate is based on accounting methods that assume unsubstantiated reduced costs on a per resident basis for providing basic City services such as Public Safety and Transportation. That article will also discuss the fact that there are almost no guarantees that this project will ever be built as proposed because the Baseline Features are vague and imprecise and the Development Agreement is exceedingly weak. 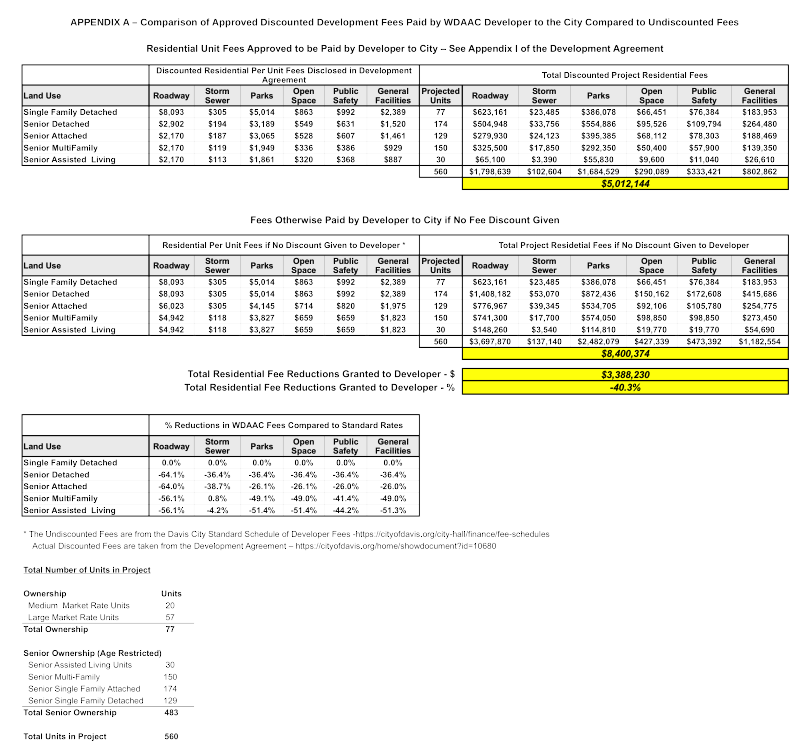