How will – and should – the recent Monsanto Roundup decision affect Davis? 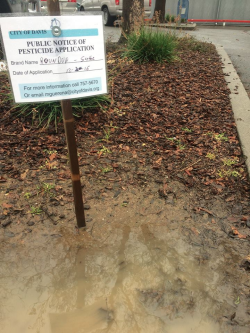 A few weeks ago, a jury awarded $289 million in damages to a California school groundskeeper, finding that his cancer was caused by on-the-job exposure to Monsanto’s pesticide Roundup, the main active ingredient of which is glyphosate.  How will this affect Davis?  How should it?

Recall that, in a rather messy and prolonged process, the Davis City Council voted to “phase out” the use of glyphosate.  But where is the City in that process?  Do we even have an IPM specialist to replace Martin Guerena (who stepped down many months ago after being ill-treated by the City), i.e., someone who could oversee this phase out and report on it?

And does the phase out need to be accelerated?  Or should it occur immediately?

According to one article, several action groups say that “councils should ban the use of Roundup or risk being sued by employees and residents if their health is affected”; Alliance for a Clean Environment convenor Jane Bremmer said councils should immediately suspend the use of glyphosate in public places, particularly children’s playgrounds.  As far as I know, this has not yet occurred in Davis. But two North Bay cities have already stopped using Roundup in light of the ruling.

Charles Benbrook, who provided expert testimony at the trial, believes that the decision “surely will have an impact on the many hundreds of cases already moving through the courts, especially if and as other juries concur with the cancer-causality judgement embedded in the jury's verdict in the Johnson case.”  And Benbrook believes that science supports that judgement, with “hundreds [of studies that] report evidence supporting a role of Roundup in Lee Johnson's non-Hodgkin lymphoma.”

What say you, Davis City Council?  Will you act again, or will this require many more months of frustrating citizen effort?  Will you protect Davis citizens and workers?  Will you risk costly lawsuits?

Excellent article, Roberta. Thanks so much. This article could be the basis for a Letter to the City Manager and the City Council and LTE or opinion piece to the Davis Enterprise to ask that a policy be approved before or soon after the New Year, before "spring" with emerging weeds and plants. Tempus fugit!

Thanks, Nancy. That's a good idea.