Deceptive map for the West Davis Active Adult Community (WDAAC) Project
Why Won’t David Taormino Participate in Forums or Debates on Measure L – What is He Afraid of or Hiding?

Why Is Davis So White? A Brief History of Housing Discrimination

In 1917, the Supreme Court in Buchanan v. Warley ruled municipal racial zoning unconstitutional. In response, private agreements—including restrictive covenants—started to be put in place to continue residential segregation practices: “Racially restrictive covenants refer to contractual agreements that prohibit the purchase, lease, or occupation of a piece of property by a particular group of people.”[1] These were legally-enforceable contracts put onto the deed of the property. They were enforced with the help of neighborhood associations, real estate boards, and other organizations. For example, the National Association of Real Estate Boards (NAREB), started in 1908, promoted the use of racial covenants in new developments.

Typical language in these racially-restrictive covenants included statements such as “…hereafter no part of said property or any portion thereof shall be…occupied by any person not of the Caucasian race…”[2] These covenants became so commonplace that “by 1940, 80% of property in Chicago and Los Angeles carried restrictive covenants barring black families.”[3]

The Federal Home Administration (FHA), created in 1934, established mortgage lending requirements in its Underwriting Handbook. It implemented a policy of “redlining” or refusing to back/approve mortgages in specific neighborhoods based on racial or ethnic composition. The Handbook incorporated “residential security maps” into its standards for issuing mortgages. These color-coded maps described the “level of security” for real estate investments in 239 American cities. Additionally, the FHA Underwriting Handbook recommended the use of restrictive covenants to “provide the surest protection against undesirable encroachment and inharmonious use.” These federal redlining practice expanded beyond FHA-backed loans and spread through the entire mortgage and real estate industry.

In 1948, the Supreme Court in Shelley v. Kraemer ruled that state enforcement (including judicially) of racially restrictive covenants violated the Equal Protection clause of the 14th Amendment. However, it also found that private parties may voluntarily adhere to them. While this removed the legal ability to enforce the covenants by government, they were still commonplace. They were also used in combination with other practice such as “steering” of non-white potential homebuyers by real estate agents into some areas and away from others. And the continued existence of the covenant continued to send powerful signals about who was welcome or not in certain neighborhoods.

Legislation in California such as the Unruh Civil Rights Act (1959), and the California Fair Employment and Housing Act (1959) made some discriminatory practices in employment and housing illegal. The California Fair Housing Act of 1963 (AKA the Rumford Act) further strengthened the rights of people of color to purchase housing without being subjected to discrimination. The Rumford Act enabled potential renters and homeowners to appeal to the California Fair Employment Practices Commission (FEPC) to force landlords/owners denying them rental or sale due to race to comply with fair housing law. However, the law only applied to public housing and in all residential properties with more than five units, so it excluded the vast majority of homes in California: it only applied to one-third of California’s 3.8 million homes.[4]

There was immediate strong opposition to the Rumford Act led by the California Real Estate Association (CREA; renamed as the California Association of Realtors in 1975), the Apartment House Owners Association, and the Chamber of Commerce that “made California the battleground for a national showdown on housing legislation”[5] with their campaign to repeal the Act through Proposition 14. The proposition passed in a statewide vote in November 1964 and soon after it was passed, the federal government cut off all housing funds to California. The proposition campaign with its highly inflammatory racist rhetoric has been cited as one of the causes of the Watts Riots of 1965.[6]

The California Supreme Court reinstated the Rumford Act in 1966, ruling that Prop 14 was illegal, because it violated the 14th Amendment and the Civil Rights Act of 1866, which “prohibits all racial discrimination in the sale or rental of property.”

The passage of the national Fair Housing Act in 1968 finally ended the FHA’s redlining and other discriminatory practices, and made it illegal to include racially-restrictive covenants in property deeds. However, because the language still lingered in housing title/deeds documents and continued to create a discriminatory atmosphere, in 1980 California passed legislation requiring the following language to be added to covenants, codes, and restrictions (CC&Rs) by homeowner’s associations:

“If this document contains any restriction based on race, color, religion, sex, gender, gender identity, gender expression, sexual orientation, familial status, marital status, disability, genetic information, national origin, source of income as defined in subdivision (p) of Section 12955, or ancestry, that restriction violates state and federal fair housing laws and is void, and may be removed pursuant to Section 12956.2 of the Government Code. Lawful restrictions under state and federal law on the age of occupants in senior housing or housing for older persons shall not be construed as restrictions based on familial status.”

However, while unenforceable and illegal, some of these covenants continue to exist and can still be found today.[7] Despite required notifications as required by State law, this language can still provide an indication of a community’s attitudes towards inclusivity.[8]

Redlining and restrictive covenants in Davis

Early developers subdivided several ranches adjacent to the little town into residential parcels after the establishment of the University Farm. Residential development continued to increase its pace, particularly in the 1920s when prosperity, population growth, and alterations in mortgage practices fueled a construction boom. During this period, development began well west of Downtown in the area north of the University Farm. The unique College Park neighborhood, set on an oval street, was initially planned in 1923. Designed by landscape architect Harry Shepard, College Park was restricted to residential development, and – like many such developments of the era – the deeds contained clauses that were meant to prevent non-whites and Jews from owning or residing in the neighborhood. 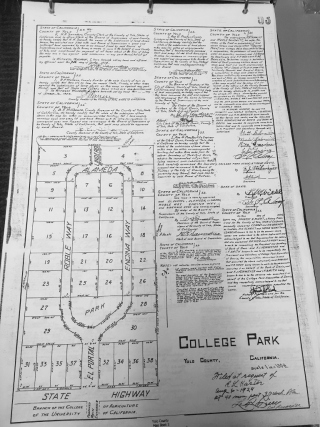 Image: subdivision map for the College Park subdivision in Davis from 1924. [source: Yolo County Clerk-Recorder archives, retrieved by the author] 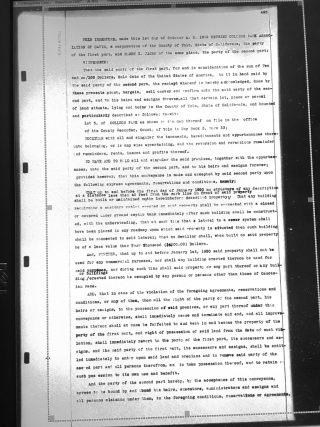 Image: page excerpted from the legal property deed for the College Park subdivision in Davis from 1924. [source: Yolo County Clerk-Recorder archives, retrieved by the author]

This author conducted extensive research in the Yolo County Recorder archives to locate examples of restrictive covenants. The following shows original documents for the College Park development including the subdivision map from 1924 and racially-restrictive language in the deeds for the properties that were originally sold by the College Park Association. Violation of these restrictions were subject to immediate forfeiture of the property. As described in the page excerpted from the legal property deed for the College Park subdivision:

“...nor during such time shall said property or any part thereof or any building or buildings erected thereon be occupied by an person or persons other than those of Caucasian race.”

“No persons except those of the white Caucasian race shall use, occupy or reside upon any residential property in the tract of land hereinabove described, or any future subdivision thereof, except when employed as a servant or domestic in the household of a white Caucasian tenant or owner….for the sole reason that they [the owner] believe possession and occupancy by such persons would have a prejudicial effect upon the value of other property to said subdivision and in future units thereof.” 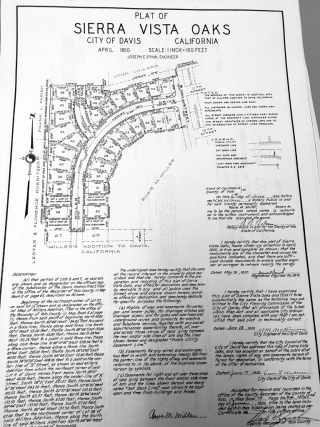 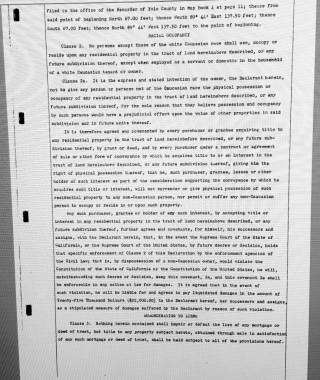 Image: page excerpted from the legal property deed for the Sierra Vista Oaks subdivision in Davis from 1950. [source: Yolo County Clerk-Recorder archives, retrieved by the author]

Dr. Hernandez stated that some of the covenants in the city of Davis were unusually harsh in that they are the only ones in his extensive national research on the subject that had financial penalties attached. As shown in the deed document for Sierra Vista Oaks under the “RACIAL OCCUPANCY” section, in addition to property forfeiture there was an additional financial penalty of $25,000 for violations. That sum at the time of the covenants were written was more than the price of the houses. This restriction was directly flaunting the landmark Supreme Court decision in 1948 that made these covenants unenforceable by the government and attempted an end-around by instituting a financial penalty even if forfeiture was not enforceable. As shown in the documentation, there is also specific language in the deed that states that these restrictions would still be applicable even in the face of future California Supreme Court or U.S. Supreme Court decisions that ruled them unconstitutional indicating that the property developers intended to directly flout national and State law.

In Davis—as in many area of the U.S.—redlining, restrictive covenants, and other discriminatory practices effectively locked out minorities from being able to participate in one of the greatest mass opportunities for wealth accumulation in U.S. history: the post-WWII housing boom. And even as overtly discriminatory practices started to be curtailed, post-WWII municipal zoning practices in the 1950s— especially in fast-growing suburban areas—emphasized large-lot single family homes as a way to exclude more affordable housing types and to continue patterns of racial/ethnic/income segregation. Davis is an example of how the wealth disparities that were accentuated by these policies and practices persist today with residential patterns and housing opportunities distributed along particular racial/ethnic and income lines.

In part two of this series—entitled How White Is Davis? Historic Demographics and Continuing Patterns of Discrimination—I will examine historic and current demographics in Davis compared to surrounding areas and California as a whole in order to determine what sort of continuing effect historic patterns of discrimination may have had. This will also include a discussion about how contemporary demographic, development, and lending patterns in places are tied to past housing practices that shaped their social geography.

Rik Keller has 17+ years of experience in affordable housing policy & analysis in Texas, Oregon, and California after obtaining his master’s degree in city planning; he is also a 10+ year Davis resident and a current renter.

[8] Such as in El Dorado County: https://www.mtdemocrat.com/opinion/california-rambling-jim-crow-ccrs/

And Prop. 13 just exacerbates the situation as those who could afford to buy and hold on to property in Davis now pay property taxes based on valuations considerably lower than the market value of their home. Prop. 13 really is shameful.

Yes, there are problems with Prop 13...but there are "red herrings" swimming around the issue.

Has there been a comprehensive statewide, let alone, community study of how many houses have sold since Prop 13 and thus are on the tax rolls at current value. It's been almost 40 years since implementation.

Many people agree, corporations that own property and never sell, think of industrial parks, malls, etc., but increase leases and rents, are the real beneficiaries of Prop. 13, including homes covered by Prop 13 that are rental properties.

Some real thought needs to be given to how to reform Prop. 13 and not keep blaming the homeowners.