Another “Untruth” by the Yes on Measure L Campaign

By Alan Pryor and Pam Nieberg

The Yes on Measure L campaign has been falsely characterizing the soils on which the WDAAC project is to be built as “unproductive” or “low quality alkaline soils solely used for winter animal feed crops”. Their most recent mailer contained the following graphic: 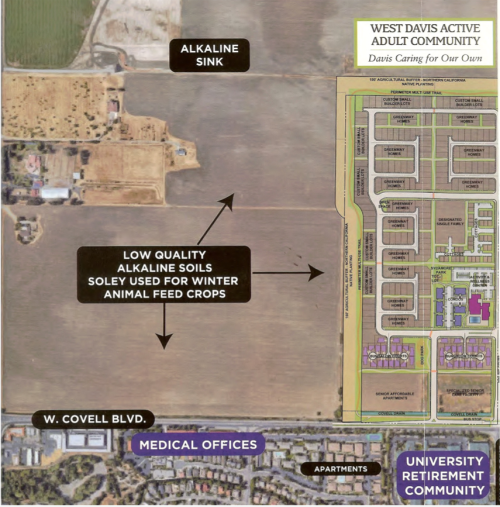 These claims are demonstrably untrue. In fact, the soil is suitable for a variety of human crops as characterized by the Yolo Co Agricultural Conservation and Mitigation Program. In summary, according to the EIR certified by the City Council, the lower approximately 50% (36.2 acres) of the site is Brentwood clay loam. Approximately a third of the soils (26.75 acres ) on the site directly above the Brentwood soils are Marvin silty clay. Above that are Willows clay (11.44 acres), and only a tiny piece (0.56 acres) in the upper north west piece of the site is Pescadero silty clay/saline-alkaline.

The soils are classified as of “local importance” which are defined as cultivated farmland having soils that meet criteria for “prime” or “statewide importance” if the land is irrigated. The following information on these soils is excerpted from the WDAAC Final Environmental Impact Report including the following soil map of the project: 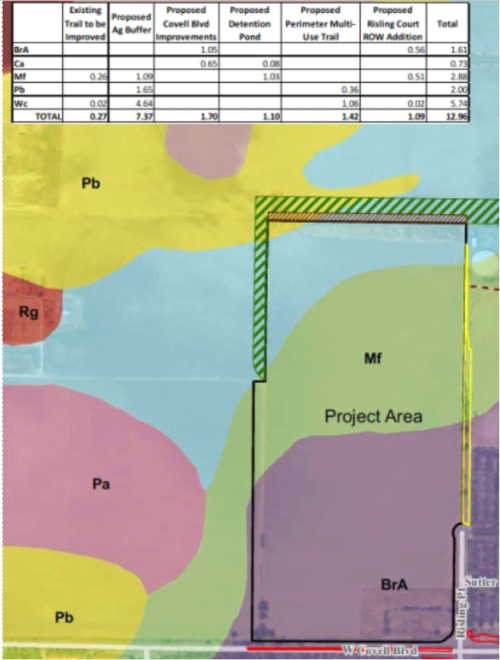 Brentwood silty clay loam. This soil is found in the southern half of the project site. Brentwood soils are on nearly level to gently sloping fans and formed in valley fill from sedimentary rocks. These soils are well to moderately well drained. They have very slow to medium runoff and moderately slow permeability. Most areas are irrigated and are used for tree fruit, nut crops, vegetables, and field crops. Vegetation is annual grasses, forbs, and scattered oaks.(emphasis added for human food crops)

Marvin silty clay loam. This soil is found in the northern half of the project site. Marvin soils are on nearly level flood plains at elevations of 10 to 100 feet under annual grasses and forbs. They formed in fine textured alluvium from mixed sources. These soils are moderately well to somewhat poorly drained. They have slow runoff and slow permeability. Common uses include: irrigated and dry cropland and pasture; and grain, field crops, sugar beets, alfalfa and rice crops.(emphasis added for human food crops)

Pescadero silty clay, saline-alkali. This soil is found in the northwestern corner of the project site. Pescadero soils are in basins and formed in alluvium from sedimentary rock. These soils are poorly drained or ponded on concave slopes. They have very slow runoff and very slow permeability. These soils are used mainly for livestock grazing. Some reclaimed areas are used for irrigated field, row crops and irrigated pasture. Commonly cultivated crops are sugar beets, barley, alfalfa, corn and tomatoes.(emphasis added for human food crops)

Willows clay, alkali. This soil is found in the northern third of the project site. Willow soils are in basins and formed in alluvium from mixed rock sources. These soils are poorly drained. They have slow runoff and very slow permeability. These soils are generally used for growing rice, sugar beets and safflower.”(emphasis added for human food crops)

Impact 3.2-1: Project implementation may result in the conversion of Prime Farmland, Unique Farmland, and Farmland of Statewide Importance, as shown on the maps prepared pursuant to the Farmland Mapping and Monitoring Program of the California Resources Agency, to non-agricultural uses (Significant and Unavoidable)(emphasis added)

(1) All land that qualifies for rating as class I or class II in the Natural Resource Conservation Service land use capability classifications.

(2) Land which qualifies for rating 80 through 100 in the Storie Index Rating.

(3) Land which supports livestock used for the production of food and fiber and which has an annual carrying capacity equivalent to at least one animal unit per acre as defined by the United States Department of Agriculture.

(4) Land planted with fruit- or nut-bearing trees, vines, bushes, or crops which have a non-bearing period of less than five years and which will normally return during the commercial bearing period on an annual basis from the production of unprocessed agricultural plant production not less than two hundred dollars ($200) per acre.

(5) Land which has returned from the production of unprocessed agricultural plant products an annual gross value of not less than two hundred dollars ($200) per acre for three of the previous five years.

As described in Table 3.2-3, Brentwood silty clay loam (BrA) and Marvin silty clay loam (Mf) (if irrigated) both qualify as prime agricultural land under the Yolo County Agricultural Conservation and Mitigation Program. Conversion of important farmland as a result of project implementation is considered a potentially significant impact. “(emphasis added)

SUMMARY – As is apparent in the highlighted text excerpted from the project EIR, almost all of the soils found in the project have non-animal feed usage possibilities in stark contrast to the statements made by the Yes on Measure L campaign. This will have additional significant impacts on the land that is offered for mitigation for this project that are required to be at least as agriculturally productive as those consumed in this proposed project. To date, no mitigation lands have been offered by the project proponents

The Davis Vanguard has spent considerable effort rating both objective statements of facts and subjective opinions made by the No on Measure L campaign as “falsehoods” or “untruths” without further clarifying why these statements or opinions are untrue. It would seem appropriate that this otherwise completely verifiable untruth by the Yes on Measure L campaign would have been subjected to the same scrutiny.

This land has been farmed as hay for as long as I can remember. That's the best indication of the quality of the land. However, the real point here is that building new housing for seniors is truly needed. We all live on former farm land.

Jason Taormino: why did your campaign feel the need to spread false information about the soils analysis?

Why do you think a luxury low-density sprawl development is what is “truly needed”?

And why was your behavior so bad at the public forum to discuss the project that is prompted this response?:

Tia Will, October 15, 2018:
“I attended this forum as a neutral party to assist CivEnergy...My impression of yesterday’s forum presentation would have driven me away from the project even if I had previously been favoring it. The reason was to be found in Jason Taoromino’s opening statement. Despite the requests from introducing speaker CivEnergy’s Bob Fung, and the moderator Linda Deo’s specific requests to stick to the facts and issues avoiding personal attacks, Mr. Taoromino ignored this request completely. His statement found above accused the opponents of lying and using Trumpian tactics.

Later he made multiple charges that they “do not care about the seniors of Davis”.  He does not seem to realize that one of Trumps repeated tactics has been to accuse opponents of that which he himself is doing. He did this with a dismissive, argumentative, and arrogant manner that I found more in line with Trumpian tactics and/or a recent Supreme Court confirmation hearing than anything stated by the opposition. I do not like bullying tactics and I certainly did not appreciate this aggressive approach.

My bottom line is that when proponents of any change resort to attacking their opponents rather than simply arguing for the benefits of their own proposal, a much closer review of the proposal is warranted as they are obviously deflecting away from issues they would prefer not to discuss.”