SACOG Approves $2.9 Million Grant For Installation of Electric Vehicle Charging and Mobility Hubs in Yolo County
Vote for your delegates to the CA Democratic Party: Check out Workers & Students for AD4 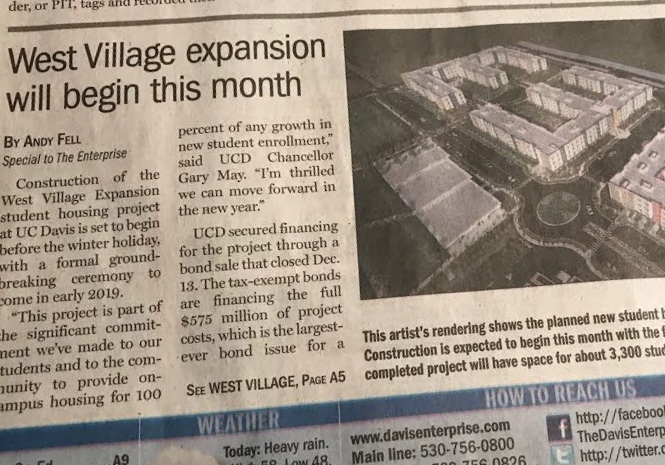 The problem is, the Enterprise has not properly identified who Andy Fell is in this article. Yet, on page 2 of the same Enterprise there is another article titled, “Body Found Near UCD Campus” that sheds some light on Andy Fell (thankfully, he is not the body).

No, this other story on the same day quotes Andy Fell and calls him “UCD Spokesman Andy Fell.” One can only assume this is the Same Andy Fell.

Andy Fell is a spokesperson for UC Davis who works in the Strategic Communication department.

So, when did the Enterprise start allowing the University to just report on itself? This is a front-page story, with essentially no indication that it was actually written by the UCD spokesperson.

The Enterprise has presented this UCD press release as a news story, when it is actually just UCD PR, or as UCD calls it, "Strategic Communication." 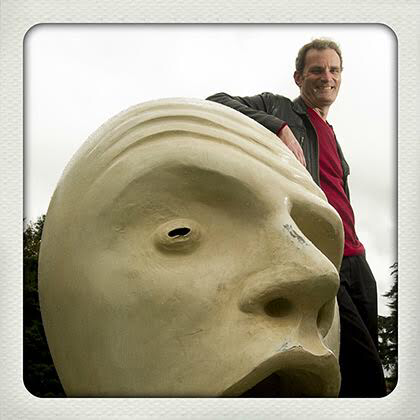 The UCD website describes Fell as, News and “Media Relations Specialist” who, “produces communications about research at UC Davis, especially in the mathematical and physical sciences, biological sciences and engineering. He also works with the Office of Research and the UC Davis Police Department, and other campus units as needed.”

The UCD website further reports that “before arriving at UCD in 2000 Fell, “worked in an agency producing communications for the pharmaceutical industry.”

Considering student housing has been one of the most contentious issues in Davis over the past several years, one would think the Enterprise could spare a reporter to investigate the Universities claim that it is on track to house 100% of new students.

While UCD claims in the article that the new West Village apartments will house 3,300 students by fall 2021, it makes no mention of whether UCD will be able to create the 660 new beds by fall of 2019 it previously promised in its memorandum of understanding with the City of Davis.

Previous announcements from UCD regarding this West Village project have included development at Orchard park which was set to be developed by the same New Jersey based development company (Chancellor May Column). This new article makes no mention of Orchard Park what-so-ever, even though it is still the same developer. One need just drive by the old Orchard Park location to see that there is absolutely no construction activity. If construction hasn’t started yet, it seems highly unlikely any significant project at Orchard Park could be completed by fall 2019.

If the Enterprise had actually reported on this important news story it could have asked some of these important questions.

Thank you Colin for illuminating the problem of authorship and the duty of the Davis Enterprise to carry out due diligence is writing and asking the pertinent questions to inform the community - not just be UCD's unpaid spokesperson.

And, second, as you point out: there is the real need for the city to hold the university accountable to honoring the MOU, but that's not easy. That's another very tough problem...as UCD as strung the City along with promise after promise couched in terms of the MOU, but never realized...and the City and City Council's have had little power to hold UCD accountable. Let's see what happens in 2019.

Thanks for pointing that all out. And Orchard Park, what a total shame.

Good comments Colin. Why don't you send this in an abbreviated version as a letter (for publication) to the DE. If they don't publish it, let readers (of the Davisite) know and send full version to editor and owner.

Thanks for this article, Colin. The balance in this town has been tilted for some time.

Thanks for this article Colin. Not only is UCD silent on the 660 beds to be built n 2019, but they also avoid discussion on a timeline for then the last 3,000 beds are to be built which is another "commitment" by UCD. According to the MOU, UCD is supposed to build these last (unscheduled) 3,000 student beds before the end of the current UCD LRDP, but that is not until 2030-2031.

So the concern, of course now, is whether UCD will drag their heels until last minute to build these 3,000 beds which are needed now. Or, will UCD somehow try to run the clock out and simply claim they could not get around to building them by the end of the LRDP period? The City needs to keep the pressure up on UCD to get these last on-campus 3,000 beds scheduled to be built, much sooner than later.