Vote for your delegates to the CA Democratic Party: Check out Workers & Students for AD4
Processing the events surrounding the tragic killing of Officer Corona 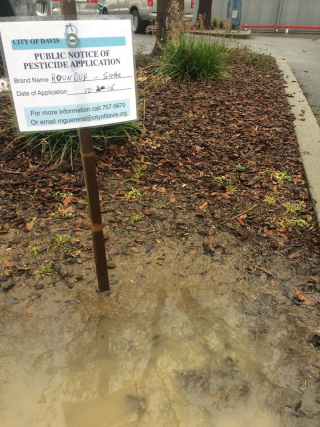 Following are comments I delivered to the Davis City Council at their last December meeting.

My name is Alan Pryor and I am on the City's Natural Resources Commission and their Hazardous Materials Subcommittee. But I am speaking tonight as a private citizen. I am here to speak about the City's pesticide management policies and deliver some bad news but also some very good news.

First the bad news - You may recall the current Integrated Pest Management Policy was approved by Council in November of 2017. This policy was recommended by Staff over the written objections of many citizens and 3 of the City's own Commissions who urged the Council not to rubber stamp Staff's proposal because they felt it did not go nearly far enough to reduce pesticides exposure – particularly in our Parks where the majority of exposure to children occurred.

One key element of the Staff proposal was that the City would immediately begin an intensive search for a new IPM specialist to replace our beloved Martin Guerena who, as you all have been made aware, had left under less than ideal circumstances. Staff indicated they would have a replacement in place by the end of Q1 and shortly thereafter they would form the Technical Advisory Committee to ostensibly review all of the chemicals used by the City to determine how to use less chemicals to make our Parks safer. Well, none of those objectives has been met and we are no closer to an official organic-only policy which was recommended to Council by the NRC but rejected by you in line with Staff's recommendation. Well, if I was a mother bringing my kids to the Parks in Davis, I would be worried if this is all I knew.

Fortunately, there is some very good news. One recommendation that was accepted by Council was that any pesticide applications by the City anywhere must be noticed 48 hours in advance by a new email notification system. This was quickly and very efficiently implemented by Staff and it has seemingly worked very well. Thanks to Stan Gryzko in Pubic Works for that. They did a great job.

The other very good news is that, if these notifications are to be believed, our Parks and Recreation has only had one application of any pesticide in a Park at all during the entire 2018. That one application was an application of Round-up at Arroyo Parks early in the year which caused somewhat of an uproar because it was done on a designated green zone within the Park. But with that one exception, there have not been any other pesticides used in our Parks at all this past year.

Essentially, our Parks Department has gone way beyond an "organic-only" parks and has moved to completely pesticide free parks. This is really a remarkable achievement and conclusively shows that what the NRC claimed could be done, that is elimination of all toxic pesticides from our Parks, has in fact been functionally achieved. Parks and Rec deserves a well-deserved shout-out for this and we hope that this trend is not reversed in 2019. We will be watching very closely.

Note added afterward: The City is still periodically spraying some medians strips and at the North Davis Ditch and at the South Putah Creek Preserve off of Mace. Residents who want to be informed of pesticide applications in the City can sign up at https://cityofdavis.org/city-hall/city-manager-s-office/enotification and click on the first selection of the list.

For previous articles on this subject that give some of the background, see: