Failings of the Downtown Paid Parking Proposal
City Council Out of Step on Parking, Roads, Housing, and the Claw: Will it Impact the 2020 Council Race? 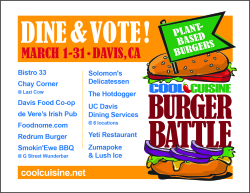 With just a little over a week left of the March Cool Cuisine vegan Burger Battle, I thought now would be a good time to share the burgers that I’ve tried so far.  I hope to try at least one or two more before the end of the month.  (Full disclosure: I’m not actually vegan, more like a flexitarian).

My partner and I have tried four of the entries, focusing not on the burgers-trying-to-be-like-meat, but rather on the more unusual offerings.  Our burgers have come from the Davis Food Co-op, Yeti Restaurant, Redrum, and Zumapoke & Lush Ice (with the Upper Crust Bakery providing vegan buns for the Co-op and Zumapoke).  All were creative, flavorful, and, most importantly, delicious.  Of the four, the one from the Co-op is probably my favorite… but not by much.  Each was outstanding in its own way.

Borrowing the descriptions from the Cool Cuisine website with some of my own additions: The Co-op burger is a pan-seared Indian pakora fritter, served on a toasted Upper Crust sesame bun with a smoky tomatillo aioli, fresh tomato, pickled red onion, topped with a sweet chili micro green salad.  The mix of flavors was wonderful, and the burger also felt quite hearty and filling.  We very much hope that the Co-op keeps this on as a regular menu item.

The Yeti burger was more of a pancake, made with black lentils, red onions, ginger/garlic paste, cumin powder, cilantro, and salt.  It came with a side of rice and a tomato-based sauce, which turned out to be the perfect accompaniments.  I put the rice on the pancake and poured the sauce over that.  Yum!

The Redrum burger was (I believe) its regular black bean offering, but made in a vegan style,  topped with grilled mushrooms, sliced avocado, red salsa, and green tabasco in a lettuce wrap.  Although black bean burgers are not so unusual anymore, I found this to be a particularly tasty one, with corn and red bell peppers particularly appreciated ingredients.  (Apologies for not getting a picture of this one). 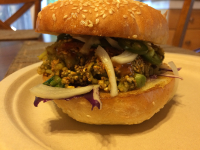 The Zumapoke burger is an avocado-potato patty with grilled pineapple, sesame roasted onions, peanut chili miso sauce, pickled jalapeno & onion slaw, fine shred cabbage, topped with an Upper Crust bun.  I particularly liked the spicy “zing” of jalapeno together with the sweet “zing” of pineapple.  Note that this burger is only available at the Davis Farmers Market.  Look for the avocado toast booth.

Davisites, which burgers have you tried?  And which one should we try next?