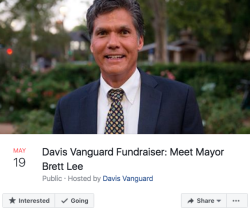 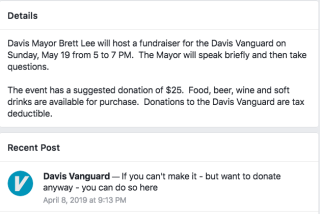 Rather, the main issue is that by fundraising for the Vanguard, Mayor Lee raises the spectre of “pay for play” – that by raising money for the Vanguard, Mayor Lee will receive favorable press from the Vanguard in return.  Now, of course, Mayor Lee might not be expecting that; indeed, knowing him, the thought probably never crossed his mind.  However, that’s not the point. Just as with standard understandings of conflict of interest, the point is to avoid even the appearance of impropriety.  (Of course, both he and the Vanguard should want to avoid this appearance, as noted already).

To make the problem more vivid, let’s imagine that in the future the Vanguard runs a positive article about a controversial decision from the City Council that Mayor Lee was instrumental in, a favored cause that Mayor Lee supports, or, even more problematically, about Mayor Lee’s re-election campaign (should he decide to run for election to the City Council again – I don’t know if he is planning to).  Readers will wonder whether the article genuinely reflects a positive view of Mayor Lee, or whether that article should be better viewed as a “paid advertisement” snuck in under the covers.  Again, this worry about appearance is completely independent of whether either side intends to engage in a problematic practice.  Both sides should keep their noses so clean that readers don’t even have to ask the question.

Some may recall the flak that Mayor of New York City Bill de Blasio took for fundraising for a nonprofit group backing his political agenda.  The linked article notes that “elected officials with ties to similar nonprofits have largely avoided taking such a direct role in soliciting money for those groups.” Frankly, I am surprised that Mayor Lee hasn’t done likewise.

Relatedly, the Institute for Local Government, in its “Everyday Ethics for Local Officials,” recommends that:

In fundraising or similar situations, public officials must take extraordinary care to separate their roles as fundraisers or representatives of a nonprofit and as public officials. They must strive to ensure that people from whom they've solicited a contribution for a charitable cause understand that such a contribution will not favorably influence their decision on a separate matter. Using one's official position to, in essence, force donations to nonprofits violates state and federal laws that prohibit extortion and protect the public's right to officials' honest services.

I think Mayor Lee is acting improperly by fundraising for the Vanguard, and I call on him to cancel his participation in this event.  His appearance there can only harm the City and the public trust.

This is very important to bring to light and it is very disappointing to see Mayor Lee’s actions.

The Davis Vanguard is a political blog disguised as a nonprofit journalism site. It has blatantly supported political campaigns of its advertisers and—contrary to ethical standards and guidelines—provides no transparency about its funding sources. Nor does it create proper boundaries between its funding sources and its coverage.

It rather stunning to see the degree to which the Vanguard does not even try to avoid the appearance of these ethical problems. Mayor Lee should know better than to associate with this organization.

“The Davis Vanguard is a political blog disguised as a nonprofit journalism site.” Kind of like here, then, right Rik?

Personally, I don't consider this to be a journalism site, but rather a community blog. More relevantly, we have not accepted any outside money from anyone (no advertising, no donations).

Elizabeth Dublin: no, not at all. Perhaps you should look into the actual standards and guidelines for nonprofit journalists linked to in this article. And then get back to us regarding how the Davis Vanguard measures up.

Wow - as soon as I saw the title of this article, I realized that it's spot-on.

In a recent Vanguard article David Greenwald attempted to defend Mayor Lee against criticism about the Mace Blvd. construction issue from Bob Dunning of the Davis Enterprise by putting words in Lee's mouth to correct the record.

The Mayor is quoted in the article as saying “I believe we got into this mess because of a mediocre design that wasn’t properly vetted.” But then Greenwald says that Lee would actually say the opposite “if pressed” ("On the other hand, if pressed, he will acknowledge that the traffic problems – while not solved by the road design – are also not caused by the road design."). Greenwald then makes other suppositions about what Lee would say, all the while without providing a single quotation from Lee as verification.

This is a telling example of the Vanguard attempting to be a mouthpiece for the establishment and providing favorable coverage for its sponsors.