Surprise! It's a Bike Party! As I biked through a wooded area on a path headed downtown from South Davis around sunset, I began hearing party music. The music and bright flashing party lights came quickly toward me and then zoomed right past. The speaker and lights were mounted to a bike and the rider was the leader of a long string of cyclists, many with brightly decorated and lit up bicycles. There were perhaps thirty of them that whizzed by me going in the opposite direction.

One of the bikers caught my eye and said as he past, “Psst, you’re going the wrong direction! Turn around, it’s a bike party”! 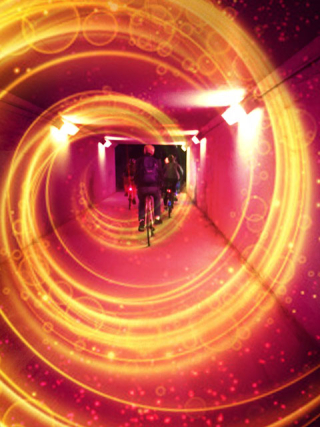 As it often is with my favorite bike rides, I have no attachment to where I am riding and I love to leave my destination to chance. As I did tonight when I quickly gripped my breaks and turned around and caught right up with the lively group of folks on bikes with flashing lights, loud music, and bike bells clanging. It looked like a lot more fun than my silent solo ride.

Daylight was fading as I stopped briefly to turn on my back flashing red safety light, tonight blending right into a group that I had blindly decided to follow. It was great to see the reaction of people in parks as we rode through with booming beats. Cruising the early evening sights of Davis during yet another beautiful sunset. After a lovely ride around the southern part of the Davis bike loop, not knowing where the group before me was headed, but thoroughly enjoying every minute of my unplanned adventure.

The flashing lights reflected in neat ways on the walls of the bike tunnel going under Pole Line Road.  The group of party bikers crested the crossing overlooking the freeway with the sun sinking into the west. The lights of the bikes shone that much brighter as the sun slipped down.  The parade of party bikers wound down, around and ended up at Sudwerk Brewery, a perfect place for the finale of this Bike Party.

Some of the bikers stayed for a pint and others didn’t. I expressed my gratitude to a fellow biker in the group. She told me about what Bike Party Davis is and that it happens the fourth Friday of every month, during the acclimate times of the year. What a fun idea! Cheers Davis! 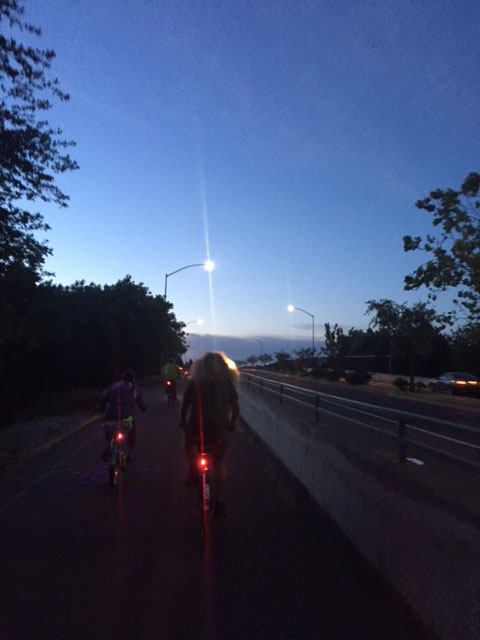 Thanks Carey for an uplifting article.