Davis Pride Festival looks back and ahead

(From Press release) Shelly Bailes and Ellen Pontac are two of the most prominent faces of gay pride in Yolo County. Together since 1973, their fight to legally marry was chronicled in many news reports. Finally, in 2008, they earned that right in California.

That perspective is something they’d like to share on Sunday, May 19, when the Davis Pride Festival returns for its fifth year. The multi-faceted day includes a fun run and culminates with a festival of music, food and support for the LGBTQ+ community.

The newest addition to Davis Pride is the Senior Zone, an idea suggested by Bailes, 78, and Pontac, 77. Bailes said it will be nice to have a place to sit, relax, and relate with others.

Pontac said, “I’m hoping it will help more seniors to meet more folks in their age group and possibly make new friends they never would have known. It can be good to be able to hang out with people who understand what being a senior means.”

The event’s theme is #StonewallStrong, honoring the 50th anniversary of the Stonewall riots. The police raid of New York’s Stonewall Inn on June 28, 1969, became a spark for the modern-day gay rights movement.

Though Bailes and Pontac were in their late 20s when the riots occurred, they were moms to young children, struggling in conventional marriages. They didn’t know why they were struggling, but they paid no attention to the riots.

Bailes was even living in New York at the time. “I had no idea this even happened. I was in a marriage that I was determined to make work. I was not political at all. About a year later, I discovered a gay bar and that changed my life.” Three years after that, she met Pontac.

Pride Director Sandré Nelson said the theme, and the Senior Zone “honor the struggles of the generations before us.”  Many of today’s seniors do remember the Stonewall Riots, and all of them forged the path for today’s LGBTQ+ youths. 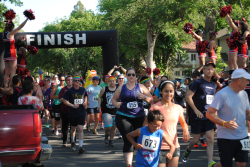 Activities include the Run/Walk for Equality, starting at 8 a.m. on Sunday, May 19, in partnership with A Change of Pace Foundation. Walk or run a 5K or 10K course through Davis’ greenbelts. Proceeds go to the Davis Phoenix Coalition’s education and advocacy programs to build a safer, more inclusive community in Davis and surrounding cities. Registration is $37 through May 18 and $40 at the event. For community members who are not ready for a 5K or 10K, there is a 1K for $20. 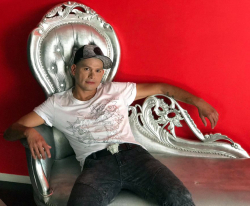 After that, there’s the free Music Festival and Community Fair, from 10 a.m. to 4 p.m. This free, family-friendly all-inclusive event will have the latest resources for the regional LGBTQ+ community and all who support it. Bay Area pop artist Xavier Toscano will headline the event, which includes two performance stages. The lineup includes Cheer Sacramento, Josh Diamonds of San Jose, Rebel of Oakland, local favorite Cathy Speck, the Badlands Sacramento Drag Revue led by “RuPaul’s Drag Race” season three contestant Mariah Paris Balenciaga, Sacramento Women’s and Gay Men’s Chorus and other musicians arranged by the Davis Live Music Collective. There also will be food trucks and an adult beverage libation station. 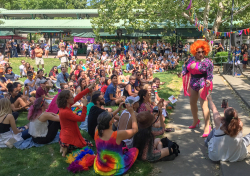 “Davis Pride is a celebration where all positive members of the community are welcome,” Nelson said. “We take the feedback we receive about our celebration and others, and improve the experience for our attendees.”

Those coming to the festival from the Sacramento area are encouraged to ride Amtrak. Organizers plan party cars with local drag queens. These include Davis-bound Capitol Corridor lines 733 from Sacramento, and 724 from the Bay Area, Fairfield and Vacaville. Riders who purchase one ticket may buy up to five companion tickets at a 50 percent discount. Purchases must be made online, at least a day ahead at https://www.capitolcorridor.org/group-travel/friends-and-family/.

Davis Pride is produced by Davis Phoenix Coalition, a nonprofit that works to foster diversity, eliminate intolerance, prevent hate-motivated violence and support LGBTQ+ youths. The coalition was founded in the aftermath of a 2013 anti-gay attack on Davis resident “Mikey” Partida. Proceeds from Davis Pride support the coalition’s anti-bullying campaigns, and outreach with area police departments, churches and schools.