Regarding the 5/15/2019 Court decision on the Trackside project 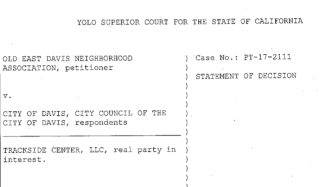 The Old East Davis Neighborhood Association is grateful that the Court conducted a thorough review of the administrative record and made a well-considered decision. The Court was unusually diligent, in that the Parties were brought together for a second hearing to ensure that all relevant aspects of the case were presented.

It was never the neighborhood's intention to prevent redevelopment of this site. We support infill. In a Davis Enterprise Op Ed on Sept 24, 2017, we showed that the Trackside proposal could be downscaled to fit within neighborhood Design Guidelines and City zoning. The Court's ruling is a good outcome that could lead to a well-designed, transitional building that is consistent with Davis' land use policies.

Background: On 15 May 2019, Judge Samuel T. McAdam ruled that the Trackside project approved by the Davis City Council "is not consistent with the City of Davis planning provisions governing the transition between the Core Area to the Old East Davis neighborhood," citing, among other things, the much greater size of the project as compared to nearby buildings that are in the Core Commercial Area, in contrast to the designated transitional area where Trackside was approved to be built. Thus, Judge McAdam ordered the City to "vacate and rescind all approvals associated with the project."  Here is the complete ruling:

I find the Judge's reasoning to be quite compelling. Trackside, as proposed, would have been built in a designated transitional area. The other large buildings that are nearby are all much smaller than Trackside would have been (Chen, McCormick, and Roe buildings), and they are in the core area where densification is supposed to occur first. There is just no way that Trackside could be considered a transitional building to the nearby residential neighborhood and thus no way that it can be considered consistent with the General Plan. Maybe some people wanted the large project (clearly not the OEDNA, who wanted a smaller project), but in legal terms I don't see how it passes muster.

I hope this legal ruling will now mean that policy for what is appropriate and is in accord with the General Plan is upheld. The project in a so-called "Transitional Zone" just north of 8th on B Street was rammed in above objections from the community that like Trackside neighborhood did not object to a project, but to a project of that scale as not suited to that Transitional Zone and not in keeping with the General Plan. Problem was, as I have stated many times, the B-Street neighbors did not have the ability to so organize and so fell victim to a Kemble Pope project with the Planning Commission and City Council backing the developer.

Nancy: I agree with most of your comments here, but perhaps it should be noted that the ability to organize (politically) made no difference regarding the outcome of Trackside.

The difference is that the neighbors around Trackside were willing to pursue the matter via the court system.

It's unfortunate that all parties had to go through that expense, but perhaps this might be viewed as a lesson for city officials - if they're open to seeing it that way.

Over here in the Slide Hill neighborhood, we are having a similar issue based on what we perceive to be a deviation from the Parks General Plan. We found out recently about a major change to the use of the park by chance. We contacted our representatives and, during discussions about lack of proper notification and how to fix that, we learned that our neighborhood park (designed as such and defined as such in the Parks General Plan) may be vulnerable to being newly conceived as a "community park" (also design-specific and defined in the Parks General Plan)- without reference to the Parks General Plan. Our understanding is that this change in designation flows from the General Plan being "out of date". My concern, and the concern of many over in this part of Davis, is the idea that one can decide that the General Plan is out of date and thereby not abide by it- instead of following process, guidelines, definitions as they exist in the plan that is to be updated. I am happy to report though, that city leaders have been quite responsive to our concerns about designing and implementing a robust notification system for changes that impact the community. I'm a strong advocate for city process that is consistently applied since otherwise there is distrust, and division in the community, as we are seeing over here. I think it would be a great idea for everyone everywhere to form neighborhood associations, and then to link those so that where we see an issue in one part of Davis, we realize it's an issue for all. Over here in Slide Hill, I've got a Trackside "Size Matters" sign in my front garden which some of the readers of this site know I've have had for quite a while. A problem in one segment of the city really is a problem for us- should be a felt as a problem for us- ALL.

Nora,
I whole heatedly endorse the sentiment I believe you have put forward. With our current lock-step council there is little check on the power they wield to change neighborhoods. If neighborhoods don't stick together, they will get stuck with some unfortunate consequences.
Colin

Agreed, Nora. Well said. We need proper community processes that maintain the things that we value.

Colin: "If neighborhoods don't stick together, they will get stuck with some unfortunate consequences."

A good friend told me (more than once) that no neighborhood "gets thrown under the bus" (and meant it). I was always impressed with that.

Coming in late on this discussion but I would like to strongly disagree with Ron O's comment that the organizing of the neighborhood didn't make the difference - that it was the willingness to litigate that was the difference.

The willingness to litigate was long in coming for the neighborhood. It didn't just happen overnight. And it was only possible because the neighborhood association WAS organized and stayed very cohesive. If it hadn't been organized we would not have been able to do what we did. Without the diligence the organization paid to the process over the last four years the court would not have had such a detailed record which allowed it to see that the city had indeed overstepped the bounds of its discretion.

It was the cohesiveness, diligence, and single-mindedness of the OEDNA that really allowed this court decision to happen. I would contrast this court case with others that have been mounted by individuals in Davis and have come to naught. It took a neighborhood to win this case.

Robert: My comment was in reference to the council's decision. Neighborhood organization made absolutely no difference, regarding that. The council decided AGAINST the wishes of the neighbors - DESPITE thorough presentation of the same factors that were ultimately presented to the court (and which resulted in an entirely different decision).

If you're stating that neighborhood organization/cohesiveness made a difference regarding willingness to pursue the matter legally, than I'd agree.

Ultimately, it was ONLY/SOLELY THE WILLINGNESS TO LITIGATE, which resulted in the neighborhood association's desired outcome.

I would also not necessarily agree with you regarding court cases initiated by individuals, or smaller groups. Hopefully, court decisions are based upon law, and not upon the number of, or relative cohesiveness of litigants.

Certainly, there are instances when individuals or small groups have won court cases. I hope that you're not suggesting that court decisions should be based upon the number of litigants, or their relative cohesiveness.

If I'm not mistaken, the city also recently experienced a partial loss regarding the need to conduct an EIR, for Lincoln 40. I don't believe that this lawsuit was initiated by a neighborhood association. Perhaps it didn't really matter for that project (since an EIR was apparently performed), but it certainly matters for future proposals.

I guess we'll see what happens regarding Nishi. The Vanguard (which you're apparently part of) has not devoted much coverage regarding the actual issues contained in that lawsuit.

I find it somewhat amusing that the controversy and lawsuit regarding Trackside has put the pro-development Vanguard in a rather awkward position, since at least two of its editorial board apparently live in the surrounding neighborhood.

Makes it difficult for the Vanguard to advocate for more density, in particular.

Thanks for the clarification Ron. I would add that the neighborhood's ability and diligence in responding to moves by the city and developers over the four years of the Trackside project allowed a more thorough vetting of the city's administrative record than if the association had come in only after the decision had been made by the council, as has been the case with some (but not all) of the litigation re. housing developments in recent years.

On a side note, the positions of individual Vanguard board members on development and other city issues is not always the same as the position espoused by David Greenwald, and nor should it be.

Thanks, Robert. I think I kind of missed that point (regarding the administrative record over a several-year period), and how that might have impacted the litigation. Thanks for pointing it out again. It also probably helped to have a number of neighbors interested in the issue, and contributing toward it in more than one way.

I would think that the competency of attorneys is another factor.

My primary point was that it's probably futile to win in the political arena (e.g., via the council), when it consists of members who are pretty determined to force more development in various ways. The change in council membership since the time of the decision probably did not change this, and might have even made it more of a concern. Perhaps this will change, if/when the makeup of the council changes at some point in the future.

I haven't seen any reports regarding whether or not the current council plans to appeal the decision. But if it does, I suspect that this will create more divisiveness between the council and neighbors.

I'm glad to hear that individual Vanguard editorial board members' views are not always the same as David Greenwald's. I'm also glad that you've chosen to comment on here. However, it seems strange that the Vanguard's editorial board has not had much impact on the manner in which comments are allowed, moderated (or entirely deleted), or the Vanguard's refusal to allow even a mention of the Davisite. I realize that (some) of these decisions are subjective, but not all of them are.

As predicted, the Vanguard's "full name" requirement hasn't had much impact on these concerns. The manner in which the Davisite moderates comments (before they're allowed to be posted) seems much more effective.

I'm wondering what the Vanguard's editorial board does.