Valley Clean Energy board meeting, Thursday, July 11
Reflections on the Fourth of July in 2019 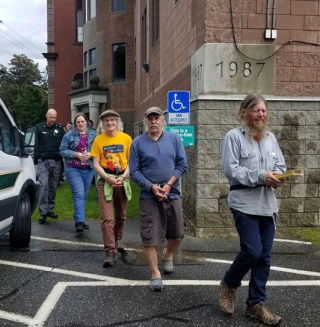 Bath Iron Works, Maine, June 22, twenty-two people were arrested for taking part in a demonstration, among them was Sarah (Sadie) Fulton of Davis.

Fulton previously challenged Assembly Member Aguiar-Curry as a certified write in candidate in the 2018 election (link). Sadie has been an active member of the Yolo County Green Party and is listed as a contact on the webpage.

Fulton and other protesters were arrested for blocking a public way at a private event christening USS Daniel Inouye, or DDG-118. The Inouye is an Arleigh Burke-class destroyer named for the late senator from Hawaii.

The Bath Iron Works shipyard, in operation since 1884, has built a long list of US Naval ships. It is operated by General Dynamics, a major US military contractor. The iron works has been a flash point for antiwar demonstrations for many years.

Fulton joins a list of distinguished activists that have demonstrated for peace and against nuclear weapons at the Bath Ship Yards.  Notable among them are several protests led by the plow shares movement including Philip Berrigan (link). Who in 1997 boarded a different destroyer, smashed control panels and poured blood of its deck. Berrigan a former Catholic priest is famous for his direct-action resistance to the draft during the Vietnam war (link) and for his role founding the plowshares movement. The plowshares may have been the most persistent to lead radical demonstrations for disarmament at many weapons plants (link).

The most recent protests follow the arrest of 25 in April which included members from Maine Veterans for Peace, Code Pink and the Global Network Against Weapons and Nuclear Power in Space. (link)

The Davisite had an opportunity to interview Fulton:

Colin: Hi Sadie, thank you for taking the time to answer a few questions for Davisites.

Colin: Have you ever been arrested during a demonstration previously?

Sadie: This is actually my first ever arrest. I’ve had a couple near misses. I was once saved from being arrested by the BBC, if you believe that. I was in Northern Ireland, and my friend and I were leading a sit-in against a 300% tuition fee hike, blocking the road. The BBC called, and asked me for an interview. I got up from the middle of the road, handed the megaphone to him, and went and did the interview. Ten minutes later the police circled in on my friend. They arrested him by his ankles and then tried to charge him with resisting arrest. If I still had the megaphone, they probably would have gone for me.

Colin: What was it like to be cuffed? What was the process?

Sadie: I was only sitting in the road for a minute; I sat down while the police officer was reading the other protesters our only warning. Very quickly thereafter a police officer asked me to stand up, I complied. He asked me if I knew why I was being arrested. I said yes. He asked, why? I pled the fifth; only time I’ve ever done that literally. I was upset that he hadn’t read me my Miranda rights, instead starting out by trying to get me to speak out of turn.

The police were clearly prepared for mass arrests and were using these awful plastic single-use cuffs, they dug into my wrists and left little welts. It’s the little things you don’t expect that are a nuisance. My pants started to fall down and I couldn’t pull them back up.

After they held us in a makeshift processing center for a few hours (during which time thirteen of the 22 arrestees took bail), the nine of us who refused bail were re-cuffed in real handcuffs - they were much more comfortable than the plastic ones - but they also were attached to a waistband so we couldn’t really move our arms more than a few inches away from our bodies. We did get a short window where, as we were led out to the prisoner transport vehicle, supporters came running over to us. My friend took all my belongings from me at that point; I was grateful to have had that opportunity.

At no point were we able to fasten our seatbelts while cuffed; given that it’s illegal to ride in a car without your seatbelt on, I was amused by the irony in that.

Colin: I remember when I demonstrated against the Iraq war I was then and am now still proud to have been arrested with several members of the Clergy. Who were you arrested with in Maine?

Sadie: Good on you - that’s awesome. I was arrested with a group of committed activists called the Conversion Campaign. They’re brilliant, committed people who have risked arrest on many occasions. Their cause is the perfect cause because it’s right at the intersection of anti-war activism and climate activism.

Their main target is Bath Iron Works in Maine, a private manufacturer who predominantly build weapons and arms. The Conversion Campaign point to arms manufacturing as one of the largest sources of carbon emissions, not to mention death and devastation. Instead of calling on BIW to close down, they are calling for them to “convert” to green energy projects, like wind farms and bullet trains. It seems like a no-brainer to do that.

Colin: I assume being arrested was a preplanned decision, what led you to making that choice?

Sadie: It honestly felt like it was time. If a group of people in their sixties and seventies could go to jail for this then I felt I had no excuse not to join them. After all, I’m likely going to be stuck here during the pending climate disaster that would kill us all if we don’t take drastic action fast. A couple days in jail is nothing compared to the torment I saw up in Paradise last November. So it was mostly symbolic, but it highlights the extent of our commitment to this cause. We are going to have to escalate our actions before we all die. Not much to sugar coat there.

Colin: How long have you held these views?

Sadie: I’ve been an activist for over a decade now. Even when I was a child I would try to talk about “saving the Earth” etc although I didn’t really know what I was doing or how to have much of an impact. Tell you the truth, I can’t remember a time when I didn’t have these views, or at least the instinct towards “things are bad, someone needs to do something, and that someone had probably better be me”.

Colin: How long were you held?

Sadie: Two nights. It was a surprise. We were playing a game of chicken; didn’t really expect them to incarcerate us, at least I didn’t. We refused a $60 bail, so instead they put us in a for-profit jail which charged the state $150 per person per day. It’s amazing how time slows down when you’re in jail; it felt like much longer than a weekend.

Colin: Was it worth it?

Sadie: Absolutely. I would like to increase the disruption that I actually caused; I feel like my action in particular was mostly symbolic, because by the time they came to arrest me there were others who had the vehicle fully blocked. But even just the solidarity was valuable, and the impact that I can have in reaching a wider network because of my international connections (including the Davisite!). Even just the incarceration was a valuable life experience. As Jill Stein said to me after I got out, “every elected official should be made to spend time in jail before they take office”. It really gives you a valuable perspective and a deeper understanding of how fundamentally broken our system is. But that’s a rabbit hole that would require a second interview to unpack...

Colin: Good on you Sadie. thank you for sharing with us.

You can read more about the conversion campaign in these articles: