Great turnout for Davis's climate strike
UCD grants to homeless students treat the symptom, not the cause

Productive Saturday meeting has some surprises

Yesterday I attended the first half of the Sept 21 Community Workshop on City Council District Elections. There were about 12 Davisites in attendance.

Paul Mitchell gave a similar presentation to the ones that had he had given at two previous City Council meetings, but with two very positive and welcome changes: not only was there a bit more detail, but also we had the chance to ask him questions and follow-up questions.

After the presentation, attendees were encouraged to try to draw their own district maps of 5 or 7 districts, using the principles outlined (see here), emphasizing especially the need to have contiguous districts of roughly equal size.  According to the procedure outlined, the demographer will take these maps into consideration when proposing draft maps for citizens and the City Council to look at.

What follows is an assortment of things that were “news to me” and hopefully will be of interest to other Davisites, concerning: 1) combining North Davis with Wildhorse, 2) precinct-level data vs. census-block level data, 3), the importance of getting the number of districts right, and 4) possible consequences of 2022 re-districting. Sample map displayed at the meeting

First, Mitchell said that he’d received a lot of feedback that North Davis should be combined with the Wildhorse neighborhood into a district.  Personally, I find that baffling.  The dwellings were constructed at very different times and have a very different character.  North Davis (like Central Davis) is adjacent to Davis High School and Community Park and is directly impacted by events there.  North Davis (like Central Davis) shops at the Marketplace shopping center and the SaveMart shopping center.  I don’t think that is true of Wildhorse.  Finally, it is my impression that North Davis and Wildhorse often vote differently on issues like tax measures (although I had trouble locating the data on the Yolo County website, so perhaps I am mistaken on this).

Second, I finally was able to ask and get an answer to my previous question about having precinct-level data on race and other parameters.  The short answer is that we really don’t have precinct-level data, only data at the larger census block level.  The calculation for districts assumes a roughly equal distribution of groups within the precincts that compose census blocks.  (Mitchell said that he did not receive my previous emails, which concerns me for purposes of Davisites communicating during this process).

Fourth, the nationwide census that will be performed in 2020 will require that the districts be re-evaluated, with lines redrawn to ensure that they still contain roughly equal numbers of people in them.  That turns out to have the odd consequence that Councilmember A representing District 1 could turn out, after lines are redrawn, to no longer be in District 1 but District 2.  But maybe District 2 would be electing a new person in the 2022 election, which would result in there temporarily being two representatives from the (newly drawn) District 2 and none from the (newly drawn) District 1.  I’m not sure there is much we can do about this, but it’s something to pay attention to.

If you weren’t able to attend the workshop, you can (and should!) still submit your map proposals to districts@cityofdavis.org.  You can print out and draw on one of the maps below and take a picture of it or scan it for emailing.  Use the numbers to try to draw districts of roughly equal size. 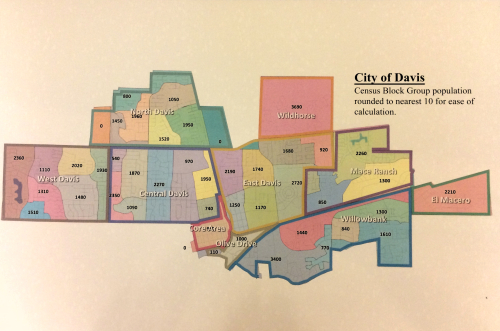 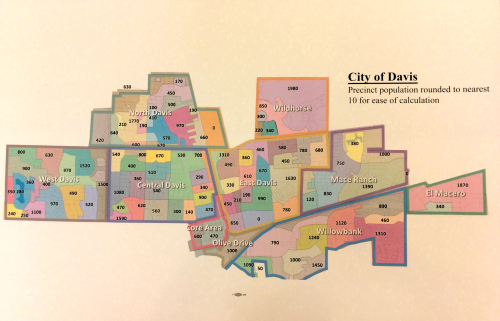 The next official meeting concerning district elections will be Tuesday, October 8 during the City Council meeting starting at 6:30 p.m. in the Community Chambers at City Hall, 23 Russell Boulevard. Initial drafts of district maps will be reviewed. There is also a City Council meeting this Tuesday where one could make comments during the public comment period at the beginning of the meeting.