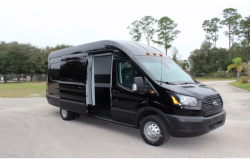 Is the City really committed to better communication?

At its Tuesday meeting, the Davis City Council received a detailed presentation about how the City can improve its communication.  Then the Council immediately threw that information out the window and approved an Armored Rescue Vehicle (ARV).

The presentation on communications was detailed and professional.  Among its recommendations was to make use of City Commissions whose members “are very engaged and are uniquely qualified to help serve as City messengers in the community and disseminate updated information.” The report also outlined many venues through which the City can communicate better with its residents, including communicating with residents that are otherwise difficult to reach.

The Council seemed to receive this presentation positively, asking only a few questions of clarification.

Then late in the meeting – around 10:30 PM – the City began the agenda item to discuss whether the City should acquire an ARV. After a presentation from Chief Pytel, the City took public comment. It was scathing.

Almost all the speakers condemned the purchase for being poorly justified and for concerns about increased militarization, but they also condemned the lack of notice from the City and the failure to run the idea of the purchase past the Police Accountability Commission first.  Some had only heard about the issue a day or two before the meeting.  Words used include “very short notice,” “push it through near secretively,” “dishonest,” “shady.”

One councilmember pointed out that the item had been on the long-range calendar and that it had been properly noticed on Thursday.

Really?  That’s the bar that we’re using?  No one is accusing the Council of violating the law.  But this certainly not an example of good communication.  The City can go above and beyond merely satisfying the dictates of the law and actually engage citizens.  But it chose not to, and not for the first time.

This was such short notice that Davis Enterprise didn’t even have enough time to get its op-ed in print before the meeting.

This does not bode well for future communications between the City and its citizens.  It seems that it wants the trappings of communication, endorsing nice presentations with lofty goals, rather than actual communication.

I would like to see a holistic health and safety per $ criteria used for significant purchases... where things like this would compete with mental health care, pothole repair & bollard removal and related. Looking at things way would increase objectivity and decrease divisions.

That's a really good idea, Todd. It would highlight the tradeoffs that are being made when the CC makes decisions like this.

Some folks were talking about trying to push for a "Health in All Policies" approach in Davis (https://www.cdc.gov/policy/hiap/index.html), but I'm not sure what happened to the effort.