As we’ve posted about previously (see, e.g., here and here), the City of Davis will soon be deciding on districts for City Council elections.  No longer will Davisites vote on 5 councilmembers at large – instead, they will get to vote on one person from their district (with the number of districts still undecided – 5 or 7 are the numbers most discussed).

As part of this process, the City has asked citizens for their input on “communities of interest.”  (Note that worksheets proposing communities of interest are due by tomorrow, Sept 20).  At two City Council meetings, demographer Paul Mitchell presented information to help Davisites make their recommendations (see slides from his presentation here).

While his presentation was excellent and informative, once I took at closer look at the slides, I realized that we were not being given enough information to make informed recommendations.  To show the problem, here is one of Mitchell’s slides showing voting precincts with population numbers: 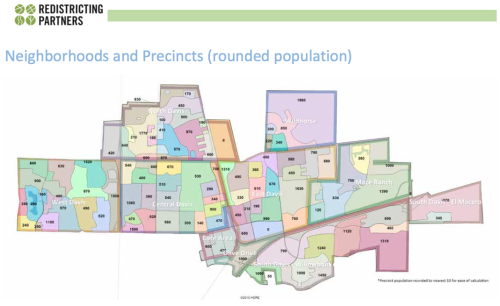 These voting precincts are fairly fine-grained, and it suggests that one could describe a community of interest in terms of them.  However, other slides that are essential for determining communities of interest are more coarse-grained; they are done by “census block groups.” 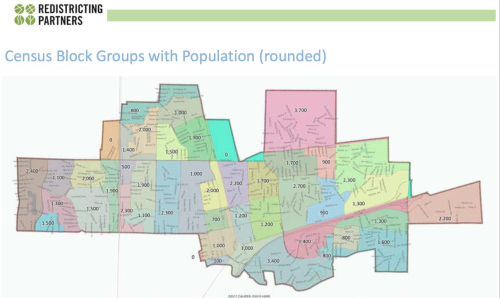 For example, renters are shown by census block groups: 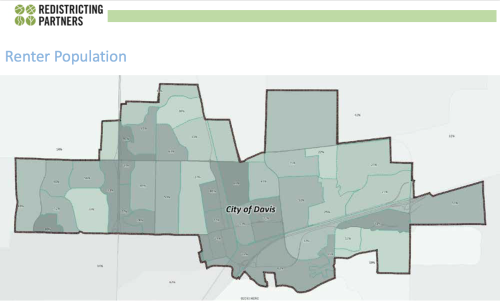 His presentation also showed Asian and Latino [sic] citizens of voting age, mobile home populations, and people with a bachelor’s degree or higher, all by census block groups.

So, can we use finer-grained voting precincts for forming communities of interest?  The first slide I posted above seemed to suggest that we can.  But we don’t have the relevant fine-grained data to be able to do that in an informed way; all we have are the coarser-grained census block groups.

As soon as I noticed this, I wrote to the Davis City Council on September 6:

I was looking at the slide's from this past Tuesday's presentation, and I noticed that data like race, rentership, etc., was done in terms of the larger census blocks rather than voting precincts.  I don't know how fine-grained the new districts can be drawn, but I am assuming that they can be at least as fine grained as voting districts, which means that we need finer-grained data.  I am writing to you all to request this information because I assume that you would be interested in having these data as well and you all are in a better position to request it than I am.  I would also be interested in seeing data on single-family homes vs. multi-family dwellings, although I realize that those aren't (directly) populational.

Thanks for considering my request.

Six days went by with no reply, so I wrote again on September 12:

I am extremely disappointed that no one has responded to this email.  I watched the City Council meeting on video and my questions were not asked there either, though many commenters had their questions re-asked by you.  I had been led to believe that one was not required to go to the City Council to be heard and that email was a good way to communicate.  Can someone please respond to my questions?  I would genuinely like the answers, as a citizen of Davis.

My apologies, but I overlooked your original email.

Also- if you send your input/ request for specific information to:

This will ensure that your comments/request regarding the districting process are documented- and I imagine they can be answered.

Kelly can correct me if I'm wrong, but all emails sent to the above address will also be shared with the Redistricting Partners firm, as well.

I'm not having any contact with the demographics firm (other than the public meetings) during this process.

All emails, including Roberta's original one from 9/6, have been shared with Redistricting Partners. I just left a message with Paul Mitchell, the demographer, to ask if he's had a chance to review the original email.  I'm happy to follow up when I hear back from him.

I wrote to districts@cityodavis.org as Councilmember Frerichs suggested.  Since then, I have heard nothing: nothing from the other councilmembers, nothing further from Kelly Stachowicz, nothing from Paul Mitchell.

Yet citizen input on communities of interest is due tomorrow.

I submitted my worksheet anyway, having little choice but to make a recommendation in absence of essential data.  Maybe those data aren’t available, but if that’s true, it would be good to know that, too.  If it is possible to obtain them, then they should be disseminated to citizens.

As others have warned, this is a rushed process, and now, we see how that rush is affecting (how it can’t help but affect) the very recommendations that are supposed to help form the basis for district decisions.

It is a “rushed process” as you point out through no fault of the city’s. One saving grace (if one could call it that) is that we get to do this all over again in 18 months with more time and possibly better data.

Agreed, it’s not the City’s fault that this is rushed. But I do think that the demographer should have gotten back to me and that the lack of better data will seriously hamper the process.

I happen to be in New Hampshire in an old cabin and my “Communities of Interest” are clearly seen every night on a night cam: bear, moose, deer, a skunk or two, porcupine, beaver intent on chewing saplings to fix their lodge across the lake, and the audio picks up loons and Canadian Geese as they settle in for the night. These critters don’t have districts and a vote, so today I am going to the nearest town to join the student Strike for the Climate.

I agree, Nancy. Aldo Leopold spoke of a “land community”, which included plants, animals, soils, and waters. It’s a message that we would be wise to take to heart. It’s not just us here, and if we think that it is, we are doomed. Off to prepare for the climate strike in Davis.