(From press release) One of California's pioneering breweries will celebrate a major milestone on Oct. 26. Sudwerk Brewing Co. marks 30 years in business, with a free community celebration that includes live music and art, and supports two local charities. 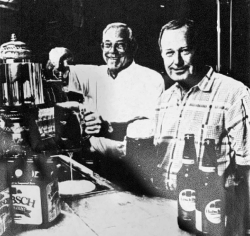 Dean Unger and Ron Broward founded Davis’ first brewery in 1989, specializing in craft lagers. Today, Unger’s grandson Trent Yackzan and co-owner Ryan Fry are at the helm, after coordinating a buyout in 2013. They lead the team of UC Davis-trained brewers, and a staff filled with locals who grew up in town. In the last six years, the brand, brewery and beer continue to rise. Earlier this month, Sudwerk earned two medals at the 2019 Great American Beer Festival, more than any other brewery in the Sacramento region. Märzen Amber Lager took gold, and The People’s Pilsner won a bronze.

A free professional mural competition runs from 10 a.m. to 5:30 p.m. Sudwerk selected five artists from more than 30 applicants to compete for cash prizes of $50 to $500. The winner will have the opportunity to develop artwork to be displayed on a beer-distribution truck that travels throughout the Sacramento region. Community members are encouraged to contribute to a dedicated community mural wall as well. 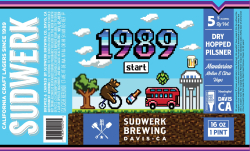 1989, a dry-hopped pilsner, was brewed for Sudwerk’s 30th anniversary

Fry and Yackzan are thrilled to host events like this, the Cherry Blossom Festival and the launch nights for Davis Music Fest and Big Day of Giving. “Sudwerk is a slang German word for ‘community brewery.’ We’ve done our best to exemplify this, making it one of our core principles to give back to our community,” Yackzan said. “We’ve donated nearly $100,000 to local charities in the last six years. This event reinforces our stance on giving, as we hope to raise more funds for the community during an event you won’t find anywhere else.”

Breweries serve as town centers, and it should be in their DNA to give back, Yackzan said. “It’s a tradition my grandpa and Ron started 30 years ago. We’re carrying the baton to the next generation.”

Sudwerk has a history as a market leader. In the early 1990s, the brewery was recognized as the No. 1 brewpub in North America, based on its over-the-counter sales. Today, it’s working to remodel the restaurant and back patio to bring back those glory days. With the craft beverage market more saturated than ever, Sudwerk is shifting its business model – focusing on local and on-site sales. It’s building on its history as a destination brewery experience that people must enjoy in person.

“As they say,” Fry said, “you can’t drink beer through the internet … yet.”

Established in 1989, Sudwerk Brewing Co. specializes in artisan brews, specifically West Coast craft lagers. Its taproom, The Dock, at 2001 Second St., Davis, is open from 4 to 8 p.m. Tuesdays through Thursdays, 4 to 9 p.m. Fridays, 2 to 9 p.m. on Saturdays, and 2 to 6 p.m. on Sundays. It offers a rotating menu of experimental and innovative beers, “honest pints” and growler fills, and good conversation. Learn more at http://sudwerkbrew.com.