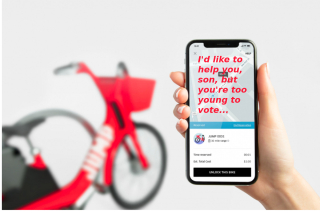 1 -  I feel it is important to note that when modifications to the bike share ordinance related to bike share were initially adopted, the BTSSC was bypassed, and that one element which Staff pushed hard for - locking bikes TO racks - resulted in a lot of the problems we had with bikes parked where they were not supposed to. Though Sacramento's unofficial policy permitted flexible parking in 2018, the Staff resisted a change until the spring of this year. Thankfully, the current Staff Report recommends e.g. "parking in the street like a motorcycle".

2 - At a subsequent BTSSC meeting in late spring 2018 it was agreed that the ordinance would be reviewed six months after the bike share system started operation, i.e. in approx. December 2018. The full evaluation was not complete until March 2019, and at that meeting Staff claimed that a lowering of the age limit would be financially difficult for Jump, claiming that it would increase their insurance costs. No evidence was provided for this allegation. At the same meeting staff from SACOG claimed that their receipt of Federal funding for installation of bike racks that would help address capacity issues resulting from the implementation of bike share was not in any way in conflict with the Age Discrimination Act of 1975, a Federal law - similar to Title VI of the Civil Rights Act - that prohibits discrimination based on age, because the funding was being used for the racks, not the system itself. This might have been true in the strictest sense but it is clear to me that the "spirit of the law" is being disrespected. It is also clear that this response was directed by SACOG's COO / General Counsel, Kirk Trost.

2a - Prior to the March 2019 meeting, in response to an article I wrote for Davisite, Staff wrote me the following, which was also copied to the head of Jump (who never responded directly to me about the issue after 2016):

"Todd, I would caution you about making public accusations regarding JUMP’s compliance with federal law. You state in your article, “As SACOG receives Federal funding to administrate the bike share system here,…”. This assertion is incorrect. JUMP is privately owned and operated and does not receive any federal funds for its operations or administration. Federal capital funds were used to provide publicly owned and accessible bike parking to help mitigate against bikeshare parking impacts"

3 - A representative of Jump has never been present at any BTSSC meeting after early 2018 or so, before the system got under way, making it impossible for BTSSC to communicate with them directly, publicly and on-the-record about any issue of concern.

4 - About two weeks ago on September 20, the day of the Climate Strike and march led by DJUSD students, Jump raised their user fees by a significant amount: For non-members from $1 for the first 15 minutes to $1.50 for the 10 minutes, and for subsequent minutes from 7 cents to 20 cents. Thus, a half-hour journey would more than double in cost. Boost and Student membership fees stayed the same, but per minute rates - after 60 minutes per day - also went up from 7 cents to 20 cents. SACOG approved this at some point, but without any advance communication - as far as I know - to Staff, and certainly not to the BTSSC... and not to users in Davis and UC Davis, In fact as of today the website still shows the old rates.

5 - In the above article, SACOG's Trost describes Sacramento Jump - a system which violates the spirit of City of Davis policy on equity, youth inclusion, climate and sustainable transportation - as possibly one of the "most successful" on the planet. City of Davis Staff have also described the discriminatory system as "successful". In regards to the financial challenges claimed by Jump in that article - and earlier by a City of Davis staffer - it is worth noting that Jump's owner Uber is planning to spend $30 million to defeat AB5, the new state law that re-classifies contractors such as Uber drivers as "employees" (Lyft, a partner in the City's SACOG-sponsored last-mile transportation solution for Davis Depot, also plans to spend $30 mil., as does DoorDash.)

6 - BTSSC's long discussion about the expansion, new parking rules and fees at our September meeting is summarized in today's Staff Report in a short paragraph. It leaves out any mention of our discussion of several elements that I included in my detailed proposal for conditions for the vote this evening, namely the provisions that would encourage citizens to move bikes that were parked improperly and something to mitigate the inconvenience of using the bikes without a smartphone, a functionality that Jump changed without notice. The minutes of this meeting have yet to be approved by the BTSSC, as our next meeting is in two days.

To summarize, the City of Davis Bicycling, Transportation and Street Safety Commission has been totally or partly-bypassed at two of the most important City Council meetings dealing with the bike share system, its staffers have enabled the operator's discriminatory age practice on at least two occasions with unsupported or legal opinions and the City's partner SACOG is in contempt of the liberation of the youth of Davis, preferring to side with a business that avoids engagement with the BTSSC and that is spending millions to undermine the health and security of its own workers, including many residents of the City of Davis.