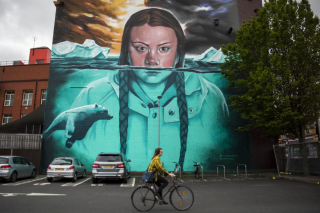 If Greta Thunberg had visited Davis last month for the Climate Strike, she wouldn’t have been able to use Jump bike share. Perhaps before arriving, she would have learnt that kids of all ages in Davis are the national champions of cycling for transportation: To school, to the park, to the homes of their friends, to the library, to the movies, to places they’re not supposed to go…. In the USA, they use bikes more than anyone else in their age group.

Greta is only 16. Perhaps she would have forcefully asked why Jump bike in Davis (and the region) has a minimum age limit of 18.

There's no state law relating to a minimum age for use Type 1 e-bikes, which are the kind that Jump uses (these are actually further speed limited, from 20 to 15 mph). There are bike share systems in California that allow use from age 16. Denver is introducing electric-assist bikes in its bike share system, which has a minimum age of 15. Bike share in Austin, TX is available to 13 year-olds.

Kids here in Davis how to ride, and their parents - and local culture, infrastructure and programs - allow them great freedom to do so. While the bikes are motorized, the functionality is mostly useful for starting from a dead stop on our typical crowned roads, or keeping a good pace while not sweating too much. Moreover, the bikes have a very low center of gravity, require a very upright position, have very strong brakes and built-in lights... I feel comfortable in saying that they're safer than many bikes owned by kids. (It's well known that many under-18's use the bikes in Davis.... and they've done so safely, but risk their parents' membership getting canceled if Jump finds out that they are not respecting the user agreement, or some liability issues could occur if there's an incident. The operators of the Austin system lowered the age limit when they saw that younger teens were gaming the system without any safety issues...)

In March 2019, the Bicycling, Transportation and Street Safety Commission voted to ask the City Council to ask Jump and SACOG - the latter has the contract with Jump - to considering lowering the age limit. I appreciate that this has been added to the Council’s long term calendar. But Jump and predecessors have resisted lowering the age range for years (going back to the pilot in Sacramento) -- the current contract makes the age limit Jump’s decision. Its owner Uber likes to get its way, in defiance of multiple goals and policies of the City of Davis.

On Tuesday, October 8th, the City Council will vote on expanding the number of Jump bikes from 200 to 500 over the next year, the approval of fees and new parking rules. The expansion is obviously important to Jump, so this gives the City Council an opportunity to make a change in the rules:

PLEASE write to Council - or show up Tuesday evening - to approve expansion only on the conditions that:

(Why is the entry threshold not based only on age? A group of friends - of peers - in a single grade might be two or three different ages. If they desire to use bike share together, an age-based threshold would split them up -- some could not ride. A peer basis - based on grade level - for use of the system includes them all. But also some test out of high school at age 16, so they can still join and use the Youth rate. A peer threshold in Davis would be a nationwide first!)

Please consider this as perhaps the best - and perhaps last possible way -  to finally make a big difference in our current bike share system respecting the City's goals for climate policy, youth inclusion and sustainable transportation.

The full details of the proposal and ask for the City Council are at this link.

Write the Council at citycouncilmembers@cityofdavis.org or show up at the City Council meeting on Tuesday evening to make your opinion known. The item is scheduled for 945pm, but it may come a little later. You can also speak during general Public Comments around 745pm.

Todd Edelman is a resident of Birch neighborhood and member of the Bicycling, Transportation and Street Safety Commission*

*for identification purposes only.