Artists share news on holiday events, art venues
Unitrans and the Davis Food Co-op Give Back to the Community 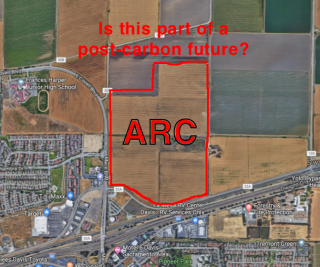 Attend a climate crisis potluck or give comment on the scope of an environmental review?  Both?

The first event: the Davis Post-Carbon Association (DPCA) is having a potluck this Monday, Dec 2 in the Davis Library: Blanchard Room 5:30 p.m. to 8:00 p.m. You can meet fellow residents who are taking action and learn how you can join the effort!

The Yolo Chapter of Health care for all will have a table. Davis City Council Member, Dan Carson, will stop in to speak. RSVP: https://www.davispostcarbon.org

The second event: As previously announced on the Davisite, there will be a meeting on the same day (Monday Dec 2), but from 5-7 PM, to give input to the City about the scope of the environmental review that should be done for the so-called "Aggie Research Campus," a proposal to build a ~200 acre business park (also including housing, a hotel, and more than 4300 parking spaces) on prime farmland outside the Mace curve.

As was also previously announced on the Davisite, the period of time to submit comment making suggestions for environmental review was extended to 5 PM on December 9 and the scoping meeting was changed to incorporate a short presentation at the beginning.

The changes open up some possibilities for those who would like to attend both.

You could go to the scoping meeting at 5 PM, hear the short presentation, take a quick look at the available materials and maybe ask a question or two, and then scoot off to the DCPA potluck.  You could submit your comments later, to the City of Davis Community Development and Sustainability Department, 23 Russell Boulevard, Suite 2 Davis, CA 95616 Attn: Sherri Metzker, Principal Planner or via electronic mail to smetzker@cityofdavis.org

Alternatively, you could attend the scoping meeting first and then join up at the potluck late or vice versa.  Either way, I'm sure they won't turn you away.  :-)

Need more info? Here is a short 16 minute video that Alan Grange made of Colin Walsh and me talking about the scoping meeting, with particular attention to issues that post-carbon folks might care about:  https://www.facebook.com/alan.gamage/videos/10157755092490489/ - [edited to add:] the video references a Google form where you can turn in your comments.  The link for that form is https://forms.gle/NDr5baM2kasbYgUJ6

Need still more info? On Wednesday night, the night before Thanksgiving, after weeks of requests from citizens, the developer delivered a letter and two associated exhibits that attempts to sketch changes from the old MRIC project to the new ARC project.  City staff uploaded them to the City's website here.  These and other documents on that page might be useful to look at prior to the meeting.

I'm wondering what the members of the Davis Post-Carbon Association (DPCA) think of a sprawling, 4,340-parking space freeway-oriented development (on prime farmland) in the first place.

Given this group's goals, it seems to me that preventing ARC would be priority #1.

It's unfortunate, that the City of Davis scheduled the scoping event on this developer's effort to pave over any acre of farm land when in the face of climate change food shortage happens to be in the forecast. So protecting any and all farmland is a priority.

Our DPCA Pot Lock for the community of Davis was scheduled over three months ago. November 1st we had a knowledge sharing event for this initial Pot Luck.

Our waste-free event at 5:30 - 8:00 p.m. in the Blanchard Room of the Davis Public Library on Monday 12/2/19 with agenda and for RSPV is at https://www.davispostcarbon.org

Agreed, M E, it's very unfortunate. It appears that at first, there wasn't to be any public input into the scope of the environmental review at all, and then, when some of us complained about it, they quickly added a meeting, but tried to shoehorn it into the timeline without really allowing enough time (for example, they've not allowed the usual 30 days of time to comment, though they did extend the time a bit, although again citizens had to request it) or paying attention to what else was going on in the City, like the DPCA potluck. This post was my attempt to say how people could try to participate in both.

You make a very good point about the imminent shortage of food in the face of climate change, and thus the increased importance of preserving farmland, especially land with class I and II soils that is currently at the proposed site.

We can issue a public comment and attend the potluck without conflict. A proposed timeline would be: we read the documentation online, attend the presentation at 5 pm, come over to the DPCA potluck at 5:30 where this conversation can continue over the potluck. Then issue your public comments before Dec 9th via the Google form collection system that Colin and Roberta and I created for the community to make it convenient for everyone to have their voice heard. @Roberta, will you be able to add the link to the Google form so that readers and have access to it?

At the potluck we will be working on creating a community wide vision for Earth-smart development and a local Green New Deal. Imagine the possibility of having a community wide consensus on how we treat Nature and create products and services in a responsible way. And, of course with no doubt the proposed development on Mace must be a part of that conversation.

This is an opportunity to be active and engaged citizens and participate in the co-creation of a future we are all going to be walking into together.

Please RSVP at www.davispostcarbon.org so that we can set up the space to accommodate people appropriately.

Have a wonderful weekend and I hope to meet you all on Monday.

Thanks, Alan, that helps to fill out the picture I was trying to give above. Here is the link to the Google form, and I will add it to the post as well:

P.S. And thanks again for doing the video with Colin and me!