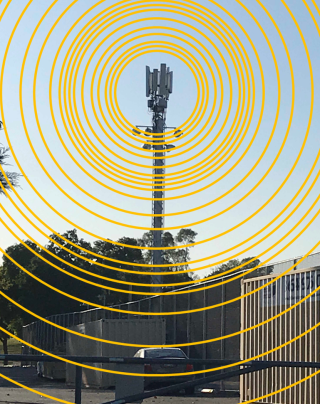 You may not have heard our town of Davis is facing an onslaught of new 5G antennas in our city without any public involvement or knowledge.  There has been no public notice given, nor letters sent to any residents living within 500’ of any of these proposed 5G cell sites.  The Davis Enterprise has also refused to publish any of our editorial comments related to 5G, nor do they publish or give comment mentioning any of our group’s multiple appearances at the City Hall giving public testimony during City Council and Planning Commission meetings, even though they were present, each and every time, taking notes.  It is obvious they do not wish to give any publicity on this issue.  They know there is a growing number of people against it and therefore, refuse to create any public stirrings or knowledge that 5G is even being deployed in our town.  I have never seen such stealth treatment by media-based news.

5G is a proven health hazard because 4G, 3G and 2G frequencies have all shown harmful biological effects in the tens of thousands of peer reviewed scientific studies.  The largest rat study ever funded in the US, the NTP study, concluded that 2G exposures alone is enough to cause brain, heart, liver cancers and other tumors.  Another Italian study of equal scale also studied 2G cellphone exposures and have come to similar conclusions in the same types of cancers in the same organs.

Why do we know 5G is bad?  Because it is the release of the ENTIRE microwave spectrum – which will continue to include the frequencies found in 4G, 3G and 2G.  None of them are going away, but in fact, the entire spectrum is being auctioned off like hotcakes and will be used without any oversight or regulation.  You see, the FCC is a revolving door between industry and government.  The current FCC Chairman is Ajit Pai, previously a Verizon attorney, and before him, Tom Wheeler, previously the CEO of CTIA, the biggest wireless consulting company in the US.  This is the typical wolf guarding the henhouse scenario.  In reality, our regulatory agency regulates us, not the industry.

The purpose of 5G in conjunction with all the other “G”’s is to bring on the “Internet of Things” (IoT).  It is creating a world where all things are chipped and capable of two-way transmission so all living and nonliving things are accounted for, controlled, surveilled and data logged into a global mainframe.  This will all be done wirelessly of course using 5G, 4G, 3G, 2G as their tool to achieve these goals, including the ability to permanently invade your private dwelling with trespassing microwave radiation technologies.

So where is Davis currently in all this?  To date, there have been eleven 5G cell antenna sites proposed, all a few feet away from living and working areas.  Two are found near schools and two near a Davis wildlife sanctuary.  The city is not challenging any of these applications nor are they informing their citizens either, and all the while more applications are streaming in without an end in sight.  The FCC has given free reign to the industry for a public and private land grab while convincing the city they are powerless to deny any of these 5G antennas.  All of these claims are untrue and illegal, especially after December 5th of this year.

The DC Court judges made a court mandate starting on December 5th, 2019, that states the FCC’s Report & Order of 2018 cannot state their planned deployment of 800,000 5G “small” cell antennas can have NO environmental effects.  This means the court threw out the legitimacy of the Report and Order based on this one neglect.  What this also means is that the City of Davis can “Toll” all cell towers/”small” cell antennas and deem them incomplete.  This is precisely what the local grassroots activists of “Davis Anti-5G Microwave Network” (DAMN 5G) has done.  We have sent in two letters to the City of Davis requesting they “Toll” all of the current and future 5G/4G cell tower/”small” cell antennas as incomplete until the environmental effects issues is resolved by the FCC.  In the meantime, the development of our national movement, position and situation against 5G grows stronger.

There is one area the City has extended and invited the involvement of the public, and that is the revising of the City’s Wireless Telecommunications Facilities (WTF) and the “small” Wireless Telecommunications Facilities (sWTF).  The Planning Commission has worked favorably with the local community and has opened the lines of communication to the public involving and inviting their comments, even requesting the city staff to revise their draft WTF/sWTF ordinance to make it better aligned with the interests of the residents and not that of the industry as how it was originally written by our city’s legal counsel.

But we still need to keep everyone on their toes and not backslide because we need to ensure our WTF/sWTF Ordinance language is strong and protective for all residents of Davis.  So please come to the Planning Commission meeting this Wednesday, December 11, 7pm at the City Hall Chambers Room to show your support in keeping our town safe from microwave radiation of ALL kinds, particularly 5G.  We currently receive full capacity cellphone coverage everywhere in Davis thanks to the 70 plus cell towers we already have, all within a mere 6 miles by 3 miles size town.  And the kind of densification industry wants for 5G is overkill.  Davis residents say “NO” to 5G!

Davisite.org received the above from multiple sources asking it be published.

The unnamed writer says: "5G is a proven health hazard because 4G, 3G and 2G frequencies have all shown harmful biological effects in the tens of thousands of peer reviewed scientific studies."

Here's some information from the lead researcher in the NTP study: “The exposures used in the studies cannot be compared directly to the exposure that humans experience when using a cell phone,” said John Bucher, Ph.D., NTP senior scientist. “In our studies, rats and mice received radio frequency radiation across their whole bodies. By contrast, people are mostly exposed in specific local tissues close to where they hold the phone. In addition, the exposure levels and durations in our studies were greater than what people experience.”

The study also found that rats in the study had longer lifespans than non-study rats, which they attributed to lower incidence of kidney problems.

You can read more about the NTP study at: https://www.niehs.nih.gov/news/newsroom/releases/2018/november1/index.cfm

This must be the same folks who don't like vaccinations or fluoride!

I have noticed it's been hard to find tinfoil around town lately.

[Hey Colin, maybe the reason I thought the author of the article had to approve comments is because it says above: "Comments are moderated, and will not appear until the author has approved them." Might want to reconcile that.]