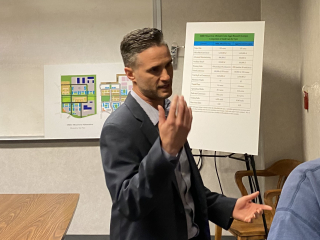 Attorney's for the Massive Mace Business Park dubbed "ARC" provided the City of Davis with a letter and tables in preparation for the EIR scoping yesterday. The City posted these documents to the City Website and emailed them to select individuals. Unfortunately these documents have come under scrutiny for possibly containing misinformation.

The City of Davis did not vet the information before releasing it to the public and injecting it into the EIR process. In the words of City Manager Mike Webb, "These documents were submitted by the applicant and therefore are appropriate to posted to the city web site as such."

When asked if the "City has opened itself up to litigation by sending false and misleading information out in advance of tonight’s meeting," Webb stated, "The City, as you know, does not edit documents that are submitted by the applicant. "

The letter below details some of the problems with the applicant's last minute release:

First, I want to thank you for your prompt responses during a busy pre-holiday shortened week. However, the actual content of these responses only serves to confirm and reinforce the statement I made on 11/25 that the City should prepare adequate and accurate information in advance of a Scoping meeting and reschedule the meeting until after such information has been circulated for an adequate amount of time to allow for adequate questions by citizens and interested agencies at the meeting, and provide a response deadline after that in order to provide for “meaningful responses to the proposed scope of the EIR." The City should also provide adequate time to address potential changes to the EIR scope after this process, and provide a revised schedule for the preparation of technical reports for the EIR that will rely on this scoping. Public scoping is a critical step for producing an adequate environmental review, and I would hope the City treats it as such, rather than as an afterthought tacked onto the project schedule at the last minute as it is clear that has been done so far.

The following is a summary list of the issues that I explain in detail subsequently:

I will go through the responses provided by the City and the project attorney and discuss details about the problematic nature of them, the questions that have not been answered, the misleading and false information that has been provided.

“While the notice for the scoping meeting was not an official NOP (as this is not mandated but voluntary) and did not include a detailed project description, it was not determined necessary to do so given that the proposed Aggie Research Campus project is very similar in scope to the Mixed-Use Alternative that was evaluated in the MRIC EIR. The meeting is intended to focus more appropriately on collecting comments related to the changes in circumstances that may have occurred in the project vicinity since the certification of the MRIC EIR in 2017, given that this is an important criterion to consider when preparing further environmental documents for projects…”

My comments on this:

“the applicant delivered a letter and two associated comparative exhibits today. Our team was able to get them uploaded to our webpage for the project before the holiday closure.  Here is the link where you will find the uploaded materials…”

This letter on Taylor & Wiley letterhead dated 11/27 that in linked to on the City’s project site for ARC discusses preparation of the “subsequent CEQA analysis” and also provides a “list of ARC components that differ from the MRIC Mixed-Use Alternative.” The letter also describes attached tables:

“The distinctions and similarities between ARC and the Mixed-Use Alternative analyzed in the MRIC EIR are further displayed on two tables that are being submitted with this letter. We will publicly display these tables at the scoping meeting on December 2, 2019 for the benefit of those in attendance.”

As discussed below, taken together the list and the tables are incomplete, inaccurate, misleading, and downright false at times. In addition they mischaracterize the MRIC MU Alt itself and thus provide an inadequate basis for comparison to the new proposal.

Major discrepancies, misleading statements, misinformation, and falsehoods include the following: 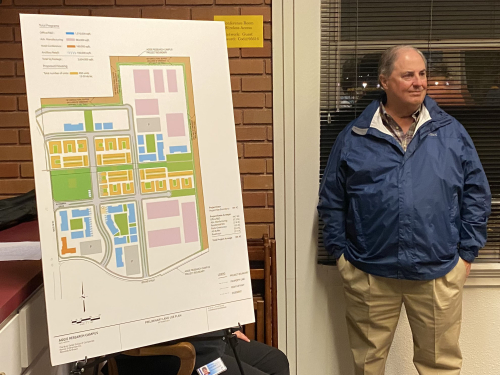 Developer Danny Ramos with the map of his Business park proposed to replace nearly 200 acres of farmland outside the Mace curve.

Thank you, Rik Keller, for your hard work on prodding the City and on doing the analysis to show that incorrect information was provided. Citizens should not have to be doing this work, imo, so your time and effort to do so is greatly appreciated. It is indeed hard to see how a proper environmental review of the project can be done when we don't have complete, accurate, and timely information about it.