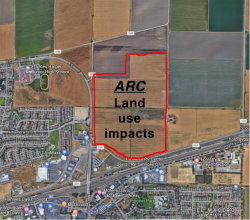 Questions about land use, parks/greenways and open space

The following comments were submitted by Roberta Millstein to the City of Davis today. This is part 1 of 2; other comments submitted by Millstein to be posted later [edit: see here] will address traffic/transportation, area impacts, and climate change impacts/interactions.  These comments serve as recommendations as to the scope and content of the supplemental environmental impact report (EIR) for the "Aggie Research Campus," a proposed massive ~200 acre business park on prime farmland outside the Mace curve, focusing on the changes in project and conditions from the previous Mace Ranch Innovation Center (MRIC) proposal.

Others who wish to submit their own written scoping comments can do so via the City of Davis Community Development and Sustainability Department, 23 Russell Boulevard, Suite 2 Davis, CA 95616 Attn: Sherri Metzker, Principal Planner or via electronic mail to smetzker@cityofdavis.org up until Monday, December 9, 2019 at 5:00 PM.

The following questions need to be addressed by the Supplemental EIR for the “Aggie Research Campus” (please note that wherever I say “impacts” I mean “environmental impacts”):

Use of land at the site:

What will happen if the expected demand for office/R&D or manufacturing or onsite hotel does not materialize? Will the developer come back to the City and ask to build housing instead on these parts of the site? What would the impacts of an “all housing” project be, or various possible combinations of increased housing with decreased use in one or more of the other three categories? These scenarios need to be described and analyzed.

Here it must be noted that Ramco Enterprises has a history of saying that it will do one thing and then later doing another, documented on the City’s own website: https://www.cityofdavis.org/about-davis/history-symbols/davis-history-books/growing-pains-chapter-6 . So these questions about the developer coming back for changes that could have environmental impacts are realistic questions, not just speculative, especially since housing has now been moved to phase 1 of the project (whereas it was in phase 2 for the MRIC Mixed-Use Alternative).

Documents submitted to the City and posted on its website on the evening of November 27, 2019 (the night before Thanksgiving and four nights before the December 2 scoping meeting) state that when comparing the MRIC Mixed-Use Alternative to the ARC proposal, the “agricultural buffer” (subject to Davis Municipal Code 40A.01.050) has been increased from 20.1 acres to 22.6 acres while “parks and greenways” have been reduced from 18.6 acres to 15.1 acres. This implies that the MRIC Mixed-Use Alternative had a combined parks/greenways and open space of 20.1 + 18.6 = 38.7 acres. However, on p. 8-11 of the Mixed-Used MRIC DEIR, a table shows a total of 75.8 acres.[1] So, if the ARC proposal has a combined parks/greenways and open space total of 22.6 + 15.1 acres = 37.7 acres (including the easement on the Mace 25),[2] then the amount of combined parks/greenways and open space in the ARC proposal is less than half of what it was in the Mixed-Use MRIC proposal. This is a substantial change in project that the Supplemental EIR must analyze. What are the impacts of the loss of the combined parks/greenways and open space, on environmental factors including but not limited to the urban heat island effect, drainage and infiltration to the underlying aquifer, and habitat for species, including the species noted above but also other species (including insect species) as well? Does the current ARC proposal satisfy the City’s standards for parks, greenways, open space, and agricultural buffers, given that the 75.8 acres of the Mixed-Use MRIC was deemed to be insufficient (see 8 - 134 of the DEIR), and the ARC proposal has less than half of that?

The ARC project proposes to use 6.8-acres[3] of the City parcel just to the northwest of the project, often called the “Mace 25,” to satisfy the agricultural buffer requirement spelled out in Davis Municipal Code 40A.01.050. This proposal calls for the City to provide a buffer (part of the Mace 25) for its own land (the remainder of the Mace 25). However, it is not clear that this use satisfies the spirit or the letter of the municipal code, which states “all new developments adjacent to designated agricultural, agricultural reserve, agricultural open space, greenbelt/agricultural buffer, Davis greenbelt or environmentally sensitive habitat areas according to the land use and open space element maps shall be required to provide an agricultural buffer/agricultural transition area” [my emphasis], and “the land shall be dedicated to the city,” implying that the land for the buffer is not already owned by the City. With this use, instead of the developer providing all of the land for the required agricultural buffer, as the Code seems to imply, the City is providing 6.8 acres of land (a portion of Mace 25) that was purchased with funds from Davis’s open space tax. In effect, this represents a reduction of 6.8 acres of open space within the City, since Mace 25 should already be open space anyway, and since the developer is not adding the full amount of the agricultural buffer to the total amount of open space in the City. What is the impact of this loss, especially considering the adjacent burrowing owls? Is this use even in compliance with the ordinance? This needs to be determined. What would the impact of the project be if the developer provided that 6.8 acres instead of the City providing it?

I understand from the presentation to the Open Space and Habitat Commission that the developer will allow tenants to determine the size of buildings and the amount of pavement, asphalt, etc., within the scope of the described project. Is this accurate? If it is accurate, what are the impacts of the worst-case scenario, where all the parts of the project not marked as agricultural buffer or parks/greenways consist of buildings, asphalt, or concrete (or similar materials), including but not limited to the urban heat island effect, drainage, and habitat for species? What are the impacts of lesser scenarios that still contain a substantial amount of buildings, concrete, and asphalt (or similar materials)?

What would the environmental impacts be if the project were to adopt the recommendations made by the Open Space and Habitat Commission at its meeting of November 4, 2019? These recommendations are:

“The Open Space and Habitat Commission recommends that, if the City Council approves the Aggie Research Campus project, the following project features should be included in the project’s “Baseline Project Features” and/or Development Agreement:

[1] In some places in the DEIR, the figure of 64.6 acres appears, but this appears to be a copy-paste error from the chapter for the MRIC project proposal that lacked housing. The Mixed-Use MRIC project required greater acreage of parks because of the onsite housing triggers Davis’s standards for resident/parks ratios.

[2] Note that the Project Description says 49.1 acres. Either way, the basic points I make in this paragraph still hold. The total amount has been substantially reduced.

[3] Note that the Project Description says 9 acres. The 6.8 acre figure appears in the documents uploaded on November 27, 2019.