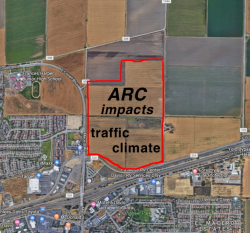 The following comments were submitted by Roberta Millstein to the City of Davis. This is part 2 of 2; other comments submitted by Millstein and posted earlier addressed land use, parks/greenways and open space.  These comments serve as recommendations as to the scope and content of the supplemental environmental impact report (EIR) for the "Aggie Research Campus," a proposed massive ~200 acre business park on prime farmland outside the Mace curve, focusing on the changes in project and conditions from the previous Mace Ranch Innovation Center (MRIC) proposal.

Others who wish to submit their own written scoping comments can do so via the City of Davis Community Development and Sustainability Department, 23 Russell Boulevard, Suite 2 Davis, CA 95616 Attn: Sherri Metzker, Principal Planner or via electronic mail to smetzker@cityofdavis.org up until Monday, December 9, 2019 at 5:00 PM.

The following questions need to be addressed by the Supplemental EIR for the “Aggie Research Campus” (please note that wherever I say “impacts” I mean “environmental impacts”):

What are realistic assumptions for future growth in traffic in the area, due to traffic apps like Waze (with Fehr and Peer already documenting that people are driving past the site to avoid I-80 traffic), and the imminent completed construction of the adjacent Nugget Market headquarters (Alhambra/Mace headquarters) and Marriott Residence Inn, with the Hyatt House, Creekside Apartments, and new apartments on Chiles Road slightly further away. (See https://www.cityofdavis.org/home/showdocument?id=10493 for a map of new projects that should be taken into account). This area is already experiencing significant traffic backups, but probable growth must also be taken into account.

How will traffic on 32A be affected, and how will that in turn affect cyclists, farm machinery, refuse trucks, and the railroad crossing? How will it affect the drainage at 32 A and Chiles north of the railroad? How can all of this be determined when the fate of 32A is in limbo while under discussion? (See https://www.davisenterprise.com/local-news/consultant-to-look-at-options-for-relocating-road-32a-railroad-crossing/ ).

How will realistic use of on-site housing by employees, commuting to the site, and parking needs at the site be determined? To give a personal example, as a professor at UC Davis I know that many of my colleagues, especially younger colleagues or colleagues without children, choose to live in Sacramento because they prefer a more urban environment. Instead, they drive to Davis to work. Similarly, those who work at ARC may not choose to live there, or may not be able to afford to live there (e.g., clerical staff, janitorial staff) and so may be driving in. Conversely, we already know that many people choose to commute from the Sacramento area to the Bay Area (see, e.g., https://www.sacbee.com/news/local/article190050994.html). We have to expect that this freeway-adjacent location will be attractive to commuters, since housing prices in this area are less than in the Bay Area. Finally, even if some ARC workers do live onsite, how do we take into account partners and adult children who may need to drive to jobs offsite? How do we take into account parents who drive their children to school, something that is on the increase in Davis? (e.g., Davis High School is not nearby). In short, it’s not realistic to assume that most people living onsite will be working onsite and vice versa, and other regular driving is likely to be involved, so more realistic numbers need to be developed based on available information to account for the amount of driving that housing will generate.

How will the environmental analysis take into account all of the changes – in aggregate – since 2015 when the MRIC EIR was first drafted, including an increase in students, faculty, and staff on the UC Davis campus as well as the approval of various housing and hotel projects throughout the City, some of which are not yet online? This is essential for a thorough environmental analysis, not just of increased traffic, but also on our limited water supply and the increased production of waste. (See https://www.cityofdavis.org/home/showdocument?id=10493 for a map of new projects that should be taken into account as well as http://www.cityofwoodland.org/1021/Development-Projects for Woodland projects on or near CR 102 that will impact Davis).

Will the proposed project make it more difficult for farmers to the east of the project (“Leland Ranch”) to farm effectively and efficiently? Will they be able to access their land and be able to efficiently transport seasonally-required equipment to and from their property?

In the few years since the DEIR was done, scientists have gained a greater understanding of the severity of climate change impacts and the extent to which they are manifesting now. To quote an IPCC report: “Climate change can exacerbate land degradation processes (high confidence) including through increases in rainfall intensity, flooding, drought frequency and severity, heat stress, dry spells, wind, sea-level rise and wave action, and permafrost thaw with outcomes being modulated by land management… Climate change has already affected food security due to warming, changing precipitation patterns, and greater frequency of some extreme events (high confidence).” https://www.ipcc.ch/srccl/chapter/summary-for-policymakers/ [my bolding]. This is true not only globally, but for California as well. A recent UCLA study “found that over the next 40 years, the state will be 300 to 400 percent more likely to have a prolonged storm sequence as severe as the one that caused a now-legendary California flood more than 150 years ago.” http://newsroom.ucla.edu/releases/california-extreme-climate-future-ucla-study

With respect to flooding, “the City [of Davis] does have concerns about potential adverse effects to its facilities and infrastructure resulting from a high water event which causes flooding in the Yolo Bypass. Specifically, the City is concerned about effects to its existing wastewater treatment facility [north of the proposed project] as well as its planned municipal water intake and conveyance system. Besides being subject to flooding by a failure of the Willow Slough Bypass left levee, the wastewater treatment facility and the Yolo County landfill are subject to flooding from breaches in the CCSB west and south levees, the abandoned south levee of the pre-1992 CCSB, and the Yolo Bypass west levee.” https://www.yolocounty.org/home/showdocument?id=28753

In light of new facts that climate change will lead to increased flooding, together with pre-existing worries about flooding in the area of proposed project, will the ARC project, with its limited drainage, exacerbate the flooding situation? Drainage has been proposed for the site, but is it up to handling a massive flood like those that are predicted? Will the presence of a business park on the site allow for a fast recovery from a flood? What are the other potential impacts of ARC in light of increased flooding?

In light of new facts that agriculture can help reduce climate change through carbon sequestration (https://ww3.arb.ca.gov/cc/natandworkinglands/draft-nwl-ip-1.7.19.pdf) what is the loss of that potential sequestration, especially given the carbon-producing traffic impacts that an ARC project would add?

It might be thought that the climate change impacts described in this section are “speculative,” but, as they are backed up with scientific studies, they are certainly much less speculative than the assumptions that the Mace EIR and ARC Project Description makes about the future of transportation patterns or claims about how many people will be commuting into and out of the ARC project. Thus, if the latter claims are to be part of the analysis, then certainly the former claims must be as well, but the former claims are sufficiently substantiated to be considered regardless.