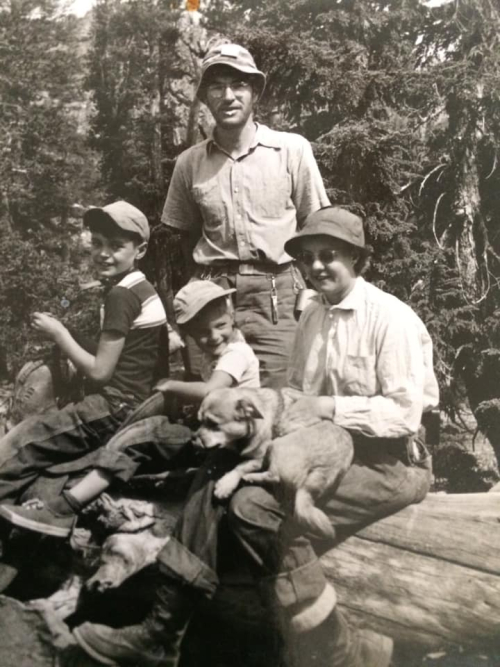 It must have been my 8th birthday, I had been bugging my parents for a dog, a friend of mine had just got a golden retriever puppy and I was smitten.

The day of my birthday Dad, and I got in the truck and drove across town to a farm house with a compound of chicken wire, a crude lean to, and a barking dog, I stayed in the truck, I was beyond excited!

Dad comes back with this short funny looking dog with a crooked left front leg, a pushed up snout, and a curled up tail, not at all what I was expecting, after a few sniffs Dad put him in my lap for the ride home, he was two years old!

We named him Skippy partly because he ran sideways due to his crooked leg, he had spent most of his life out doors, and ran around our house exploring every nook and cranny, when I woke up the next morning he was laying on the foot of my bed.

It didn’t take long for us to bond, Skippy decided I was his human, and we were inseparable. In those day dogs ran free, mother was concerned he might go back to were we got him, but he knew he was where he wanted to be, and never strayed very far from home.

When I was 10 we went to Australia for a year, and Skippy stayed with the people who rented our house, I was afraid he would forget me!

When we got home he wasn’t there, I went out in the alley way and called him, nothing, I called him again, after what seem like forever there he was, he stopped cocked his head to one side, I call him again he came running squealing and barking knocked me to the ground I was crying and laughing it was wonderful!

As I grew into my teenage years my rebellious nature forged a riff between my parents, and me, I started getting in trouble at school, and spent most of my time in my room, but Skippy didn’t care what an ass I was, he was my constant, he loved me no matter what, if I was sick he wouldn’t leave my side, he was my friend when I needed one the most, he got me through the the darkest times!

My Parents started sending me away to boarding school, I was homesick but mostly missed my dog, when I got to come home we were all over each other.

When I was 17 the family went to England for a year initially I wasn’t going but ended up there, It was 5 years before I came back, and I was married with a baby daughter, Skippy had gotten old but still got around ok he was happy to see me but that close bond was gone, I don’t know what I was expecting but I had some heart ache thinking back on our relationship, I felt guilty that I had abandoned him, I realized that in his world he had the same basic feeling we do!

When I was 22 I started an apprenticeship in San Rafael and would came to visit the family, Skippy wasn’t doing to well, we had dinner out side and when we went to go inside I tried to help him up the step, but he growled at me, it hurt my feeling, when we got inside he lay on the carpet in the corner of the living room, I went and sat on the floor next to him, when we were leaving I reached out to pet his head, he didn’t open his eyes but ever so slightly waged his tail.

There is a lot to the saying, (Try to be the person your dog thinks you are!) I struggle at this everyday and even though I’ve had the privilege of sharing my life with many furry friends over many years, Skippy is without a doubt responsible for part of who I became as a person, he was a very smart guy, he could read my moods and eventually I learned from him, that kindness would get me a lot further in life than most anything else.

The animal shelters a full of Skippys, if you need some unconditional love in your life, that’s a good place to start!

Wonderful to know about Skippy, thank you. All of our family dogs have been rescue dogs from a local shelter. My first one was a lovely what looked to be shepherd/collie/lab mix and she matted one summer with an all black lab and had 13, yes, 13, puppies, all different, that expressed her entire family history. We were able to place them all. I still remember fondly where we buried her in the woods behind our house where I grew up in Montclair, NJ. She loved water and, if you think a dog loves to put his or her head out the window, Peggy loved to go sailing and to jump ocean waves. Then, came Bounce, Muffy and my husband's Lord Jeff, and, then, after we moved here we got a wonderful yellow lab my son named Roo.