Gun Violence is the Focus of February Programs at Davis Methodist
Abramson: Davis Vote to Spray More Pesticides is Disappointing

The high wheeler bike share bikes are rusting, the tomatoes are hibernating, the persimmons are throbbing, the Creek’s not so full, I-80 is roaring and stinky, the sun’s shining perhaps a bit more than it should… it’s mid-winter in Davis and I was just temporarily suspended from the Bicycling, Transportation and Street Safety Commission (BTSSC). Any situation like this is Davis is subjectively-analytical, and dynamically-objective, but there’s several factors at play dealing more with facts (with spin, if only because none of us have infinite context.).

For now I am going to give what I hope to be an accurate accounting of the quorum piece of the matter at hand, and some suggestions… and then later on (today, tomorrow etc.) will provide some details on activity of the current membership of the BTSSC, including myself:

Quorum: My position is that this didn’t have to be an issue at all, or at the very least less of one. ... and while you’re at it, how ‘bout photos on the City website of all Commissioners?

In his remarks at the City Council meeting on Tuesday, Mayor Lee put significant weight on the threat of the BTSSC losing quorum, and now it has, at least until March if they can fill some seats, or in April when I’m back on this body.

My question is if the Council’s been doing all it can to build a “quorum-buffer” - the ability of any Commission to still meet even with absences due to illness, work or sudden departure of a member. Certainly it didn’t fulfill this with the BTSSC:

By early July 2019 - Timothy Csontos (Regular) and Ayush Patel (Alternate) were appointed to the BTSSC. This Commission would have its full 7 Regular + 1 Alternate members.

July 12, 2019 - BTSSC meeting. Commissioners Csonstos and Patel joined us as guests - this was a joint meeting with the City Council. Commissioner Lyuba Vosheva announced that this would be her last meeting.

July 13, 2019 and onwards - No announcement by the City looking for new Commissioners. Commission.

August 2019 - No meeting. No announcement by the City looking for new Commissioners.

September 12, 2019 - BTSSC meeting. Ayush Patel sworn in as a Regular; Commissioner absent. By the time of this meeting, there was no announcement by the City looking for new Commissioners, despite the vacancy of an Alternate known since July.

October 10, 2019 - BTSSC meeting. Timothy Csontos sworn in as a Regular. No announcement by the City looking for new Commissioners.

October 24, 2019 - Three Commissioners threaten departure in a letter to Council.

November 14, 2019 - BTSSC meeting. No announcement by the City looking for new Commissioners. Vote for censure was at the beginning of this meeting. Commissioner Csontos was absent.

December 12, 2019 - BTSSC meeting. No announcement by the City looking for new Commissioners. Eric Gudz and Frances Andrews announce that the January BTSSC meeting would be their last.

January 9, 2020 - BTSSC meeting. Earlier in the day the City announces on its website that it is looking for new Commissioners.

February and March 2020 - Almost certainly no BTSSC meetings due to lack of quorum. 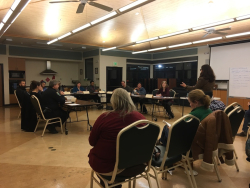 As mentioned, the City is currently looking for new members for Open Space and Habitat (OSHC),  Police Accountability, Senior Citizen and Tree Commissions, including the BTSSC.

Currently OSHC only needs to fill one seat, its Alternate. It’s the same for Police Accountability, though it’s also missing its student representative from ASUCD, and Senior Citizen also only needs an Alternate.

However, the Tree Commission is currently missing three (five Regular + one Alternate) out of eight. My understanding is that in the current situation this would mean that two absences - potentially including the Alternate - due to sickness etc would leave them without quorum. Their minutes are embedded in their listed Agendas" with this link.  Their Agenda page has postings, but oddly - for example - in January a full complement is only five + one Alternate. December, November… are the same. It’s not my intention here to do a complete audit - for this or any Commission - but it’s not clear who - if anyone - has been absent from Tree Commission meetings...

So… yes… just by looking into the details of a few Commissions, it seems like it would be useful for the Council and Staff to investigate the possibility of improving quorum-buffers. This could include a requirement to fill any seat as soon as possible after a departure was announced, and to encourage sitting members to give notice as soon as they are sure - even a couple meetings in advance. It also seems fair to assume that sometimes sitting Commissioners will only share their plans with their colleagues, or perhaps the Council or Staff liaisons. This should be strictly avoided, I would think: While it’s good to have an idea of where things are headed - and there’s no Brown Act issue about confiding or just discussing the issue with a colleague - ensuring quorum seems more important.

It took six months after the BTSSC lost its Alternate for the Council to start looking for any new appointees. The threat of departure in October should at least have triggered a hunt for the one Alternate seat. Most meetings of the current BTSSC have had one absence due to illness, etc; I imagine that it’s a similar situation with other Commissions. Perhaps any new recruitment should have a deadline of over a month from the time of announcement so that potential recruits will be encouraged to attend a meeting of a Commission unfamiliar to them. With early-as-possible recruiting of new Commissioners, the BTSSC could currently have a good quorum-buffer, even with my temporary suspension and this week’s resignation.

Based upon your writings, comments, and obvious passion for the subject, I hope that you remain on the BTSSC.

From July 2018 through March 2019 the Finance and Budget Commission had two vacancies. At one meeting FBC had to delay the start of the meeting due to lack of a quorum, and after quorum was met (one commissioner was delayed by traffic coming back from a day of work in the Bay Area), only had four members present for consideration of the very important items on the agenda that night.

In October in an effort to proactively deal with the level of Commission staffing, the applications of the eight candidates for the two open positions were reviewed, and the impressive skills those candidates were able to bring to the Commission were particularly noteworthy. As a result, the FBC Chair sent an e-mail to the City Manager, City Finance Director and the two Council Liaisons highlighting how the quality of the candidates presented an opportunity to add more to how the FBC can help the Council and the City, if the number of FBC Alternates were to be raised during the Council selection process from one to two (see Attachment A for e-mails).

FBC meeting attendance numbers were not the only consideration for adding a second alternate. The diverse and strong skills and experience of the eight applicants (and the Davis population as a whole) was seen as an opportunity to increase both the quality of FBC discussions and the quality of recommendations to the Council. The City would be wise to take advantage of those skills/experience.

Council chose a different path, approcing only the single alternate. In a community as rich in talent as Davis is, it would seem to be wise to "build bench strength" in our citizen advisory commissions, task forces and committees.

Thanks. As i mentioned i didn't do anything approaching an audit of Commission histories.

You were able to review applicants? I don't recall that this was offered the last two times with the BTSSC (I've only been on since the end of 2017). I think only the Council agendas had their names...

One drawback to having two Alternates would be two person present... who couldn't be fully present if the Regulars were all there... but overall it seems it would be advantageous just as long as Council took action more quickly to get more people in general...

Todd said . . . "One drawback to having two Alternates would be two person present... who couldn't be fully present if the Regulars were all there"

Matt: Thanks, that's exactly what I meant.

I've never found the lack of a vote to be a problem. Even without voting an Alternate's comments will/do have significant power/impact.