That Great Lawn Sign Feud of 2020
Letter: Provenza has dedicated his life to helping people

Comments for the meeting of the Davis Downtown Plan Advisory Committee 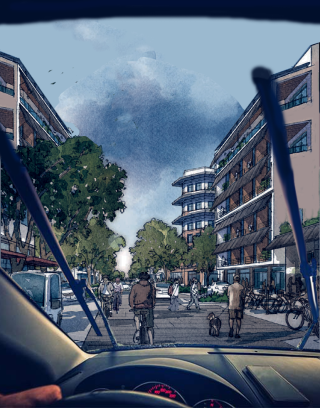 I find it tremendously irresponsible of the City Council that they would find it necessary to have an emergency closed session during the final meeting of the Downtown Advisory Committee, to evaluate the city manager, so none of them can be present.

This Downtown Plan does not reflect the thinking of the Advisory Committee at all, any more than it reflects the thinking of downtown merchants, developers, property owners or the public.

City staff and the consultant brag that you cannot change their work at all: not the public, not the business community, not Cool Davis, and not the Advisory Committee.  The Advisory Committee’s role is only to rubber stamp approve each report; the meetings only happened when the city staff wanted something they needed approved that they wanted to take to the city council.  The Advisory committee meetings are littered with the battles of committee members trying to advise, and how adamantly staff defended their right to stop any communication of change ever actually getting to the city council.

This is a staff consultant report and only a staff consultant report.  The City Council is obligated to rubber stamp it as-is, as demanded by staff two years ago as a precondition of staff continuing to do only what staff wants to do, and ignore the public, which is why city council public comments are not a pleasant time.  We have not been allowed to participate, because staff won’t allow it.  This is what staff calls tilting at windmills because they know that they are inside the letter of the planning law, even though it is rotten work.

The City of Davis tried this “staff-council-consultant/No Public” in 1986-7, staff and the consultant presenting to council what Ann Evans and Dave Rosenberg decided over the phone and then one of them told Mike Corbett what to do during the council meeting to impose the Gang of Three perpetual majority.

The professed goal of the current city council is to turn the downtown into a food court.   The downtown has shrunk in jobs in the last three decades as a result. The 2001 General Plan has done so much to kill the Davis economy that Davis has stopped being a city with an economy and jobs.  Davis is just a housing suburb of Sacramento and UCD.

Until 2001, Davis was a great place to live.  Now it is for rich people to raise their children and college students with no affordable housing.  This downtown plan is the coffin of the 2001 plan.

In my public comments at the first meeting, I condemned this entire process as staff defined, staff determined and staff ruined.  It has turned out to be just as little as I predicted.  Two million dollars and two years wasted for the ego of Lucas Frerichs and Judy Corbett.  This is the very definition of a bad job.

Mayor Pro Tem Gloria Partida went to an orientation by the California League of Cities, where they advised to “plan for your grand children’s adult future.”

At the first meeting of DPAC two years ago, Judy Corbett gave a rousing pep talk about the “Revolution of 1972”.  I argue that this entire two year exercise has been the latest celebration of the famous Davis failed attempt to rationalize ecological suburban automobile-based life.  Davis as you know it in this plan is still 53% carbon footprint due to transportation, and an ecological disaster.

In the musical the “Music Man,” the pitch was a marching band, and the sell was a bunch of musical instruments.  With your beautiful Form Based Codes, the pitch was a thriving downtown with lots of economic development when the sell is a Sears and Roebucks catalogue of hundreds of forms.  So what?

This is interesting as architecture, and if you were planning a new city, it might be convenient to use the forms as cookie cutter pieces in the jigsaw puzzle.

But the outside consultants were given complete freedom against the citizens, and were only accountable to the staff.  The consultants and the staff went out of their way repeatedly to point out to the public, the downtown merchants, the downtown property owners, and anyone interested in economic development in Davis that the only thing the city council would consider would be what the outside consultants and the city staff present in final form.  This is that report, and nobody thinks they can get three votes to change a word of it.

This is virtually the same report that the outside consultant would have given to the city two years ago; city staff and the city council were counting on that.  Public input was for pictures only, so the consultant could charge lots of money.  The proof is to compare the first and last presentation, which are so similar that the consultant will have a hard time showing any differences.

Third, as economics, you only asked a few merchants and developers what the consultant thought the city council needed to know to justify implementing form based coding.  You went out of your way to avoid any potential mysteries.  There is absolutely no insight about the potential for economic development in Davis because all this economic consultant has ever done is plug the numbers into the bay area formulas and pretend like they mean anything in Davis, when they haven’t for over 20 years.

We need a New Davis.

Until the November election, Central Davis voters will get to compare this plan as Lucas’ vision of the future of Davis with what Larry Guenther did not get to say or put into the Downtown Plan about our common strengths, weaknesses, opportunities and threats.

My answer to Judy Corbett about going forward instead of Davis continuing her car-oriented look in the future with a rear view mirror: I was standing in a lunch line with a Davis business person with a successful Northern California reputation, and I mentioned the Downtown plan process.  After saying they hadn’t even thought about the downtown in a long time, it seemed out of town customers couldn’t find a place to park; the solution was to move out of the downtown.  The future of the downtown: we should bulldoze all of it between 2nd and 5th and build high rise apartments.

This is remarkable since the speaker was Jon Hammond, the real visionary on the 1972 committee of 130 people that was appointed by the Vigfus Asmundson 1970-2 council before Black, Holdstock and Poulos were elected.

Sometimes history comes full circle.  This downtown plan is one of the worst things the city of Davis has ever done.  The city council will approve it 5-0, and then it will just be history.  This doesn’t do one good thing to enhance economic development in Davis.

After my experience participating in the approval process for the West Davis Active Adult Community (Project), I don’t find this surprising. There were many violations of federal, state, and local laws that have occurred. This is a brief summary:

I submitted written comments on the Environmental Impact Report (EIR) to the City Council prior to the first hearing on the Project. These comments were not placed in the public record as required by the Brown Open Meeting Act.

The design for the flood retention basin In the EIR was flawed, by the admission of city staff. Yet the EIR was certified. This was a violation of the California Environmental Quality Act.

Last year the developer cut down about 145 trees on the site in violation of the requirement of the Mitigation, Monitoring, and Reporting Plan (MMRP) in the EIR. The developer also cut mature trees identified as nesting habitat for raptors without a valid nesting survey. This was a violation of the terms of the MMRP, along with the Migratory Bird Treaty Act, and the Endangered Species Act. Staff of the California Department of Fish and Wildlife conducted an investigation. City staff did nothing to enforce the requirement in the MMRP. I have been unable to get information from city staff on mitigation for the trees that have been removed.

I requested information from the City Manager concerning compliance with the MMRP. I received a partial response to my request. The response was a copy of a nesting survey conducted last January. I sent a second request under the requirements of the California Public Records Act. Again I received a partial and incomplete response. This is a violation of the Act. In addition to information on compliance with the MMRP, I had specifically requested information on the design of the new flood retention basin and storm water plan. I know from talking to city staff information has been submitted, yet I was told no information is available.

The nesting survey conducted last January identified burrowing owls on the property of the Project. City staff did nothing to require mitigation as required in the MMRP. The new Yolo Habitat Conservation Plan requires mitigation.

This is the first time I have participated in the planning process in the City of Davis. I have extensive experience with state government agencies, the California Environmental Quality Act, and environmental laws. This lack of concern over compliance with public disclosure laws and respect for public comment and participation has been disappointing. This City Council and staff have abandoned their public trust responsibilities.

Mr, Kanz, Thank you for you recitation of violations of local, state and federal laws in regard to the planing process of the West Davis Adult Active Community project. This is exactly what many of us have experienced over the years in dealing with city staff and the City Council, and I might, with developers as well. This is exactly why, some of us over the years have resorted to lawsuits and referenda to try to redress the violations of law and failures to meet the highest standards for sustainable development.