Who can capture a Supervisor seat by placing the most lawn signs? 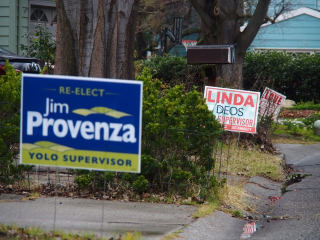 Some Davis politicos swear that local campaigns are won and lost in the front yards of Davis with the placement of lawn signs like pins in a map, marking a campaign’s territorial conquests. Others see the perennial lawn sign war as a bit silly and overwrought.

Last week, two of our Yolo County Supervisorial candidates for the 4th district were off to the races to see who could place the most lawn signs. Jim Provenza and challenger Linda Deos quickly filled the East and North Davis’s lawns with plastic pop up propaganda. Not a sign for the other challenger David Abramson was to be seen.

Linda signs sprouted up on many lawns in her North Davis area, while Jim absolutely dominated Poleline Road. Driving the road I noticed only one Linda sign and it was inexplicably sharing space with a Provenza sign.

It didn’t take long for controversy to erupt on Nextdoor.com.

The poster explained, “This political lawn sign ended up in my yard and I don’t know who put it there. I’ve covered it so it won’t get damaged by the elements before it gets picked up by whoever left it there. It must have cost the candidate some money and I’d feel bad if it simply was thrown away” 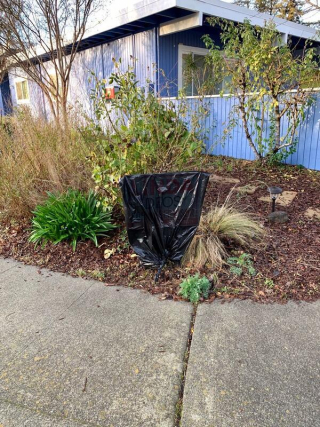 Although the sign was covered with a plastic bag, if you look closely you can see it is a Linda Deos sign. The next poster to that thread stated, “Interesting. We noticed a lot of those on our street and thought there was a lot of support for this candidate, but this act makes me question that assumption...” But is that really how people make their political decisions?

Others suggested perhaps another resident in the house agreed to the sign, but the poster assured the readers his very cute Corgis did not engage in American politics because they are Welsh.

After several more posts it became clear that this errant sign placement may not have been an isolated incident. But Deos herself posted the following:

“Hi, this is Linda Deos, herself. I want to apologize to anyone who may have received one of my lawn signs who had not given me permission to put it there. I, too, know if instances where signs for Linda Deos were removed and/or replaced by signs for my opponent. Please email me at Linda@LindaDeos.com if you have any concerns. Also, please contact me if you would like to learn more about the very important issues we face in Yolo County.”

[edit 1/21/2020] The Provenza Campaign clarified to the Davisite that no Deos signs were removed by them. No poster on Next-door claimed a wrongly placed Provenza sign or a wrongly removed Deos sign.

And with the Deos accusation against the Provenza campaign it got a little darker and another poster clapped back:

“Linda, that’s quite an accusation (unfounded) and consistent with the negative campaign you’re running. Davis is not a town where that works. I encourage you to run on your own bonafides. If you have solid positions and experience, that’s all you need for your campaign.”

“This discussion smacks of passive negativity toward Linda, who I support because she is running a campaign based on the stated needs of 2nd district constituents.  We need a woman on the Board of Supervisors who represents the values of her constituents-- and personally understands the problems of other unrepresented groups in the county."

"Others who criticize her because they have a single issue lens (which is not leaving unwanted signs in yards) need to criticize her for what they care about-- (housing) and not about her signs.”

But the original poster assured everyone:

“Anyone who puts a political candidate’s sign for any candidate in my yard without asking me first for permission will soon find that sign covered in a lawn and leaf bag and then photographed and posted to this media to display what I find to be inconsiderate behavior.  I promise to treat all candidates’ yard signs equally in this way.”

While the bickering continued on NextDoor for several days, Candidate David Abramson made a much bolder announcement. The Abramson campaign would forgo all lawn signs for the sake of the environment.

Abramson explained, “Lawn signs are typically made from corrugated plastic AKA polypropylene (PP), which is created in an industrial process using propylene, a gas formed in the refinement of gasoline.”

“Once created, the lawn signs last an election cycle and then hopefully get picked up by campaign teams or recycled by homeowners. I know that local election teams here do a good job retrieving signs, but according to data from the American Chemistry Council, less than 1% of PP products get properly recycled nationwide. The rest end up in local landfill where as they degrade, they can pose serious environmental concerns and costs to communities.” 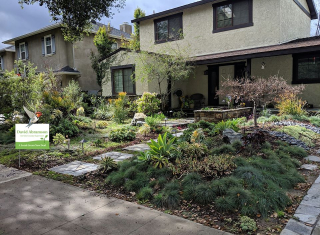 Abramson posted a picture of the sign he is not using.

Abramson went on to critique the difficulties with recycling lawn signs and recycling programs generally, “We used to send the majority of our recycling to China to be processed. In 2016 alone we sent them 1,400,000,000 lbs! But in 2017, China stopped accepting our recycling, largely due to the environmental impacts of processing our recycling. This is not well-publicized but many cities simply stopped recycling, as the markets for recycling dried up.”

David did note that the local recycling program is still having success, “I spoke with a representative at Recology Davis yesterday to ask about the recycling situation in Davis, and it was good to hear that they have indeed found markets for our recycled products amidst the recycling crisis.”

Finally, Abramson explained, “For me there ended up being no way to reconcile a platform and vision of a Local Green New Deal with creating the amount of waste and resource needs associated with printing lawn signs. We are putting it all to the test in this campaign here and we seek to walk what we are talking right here and right now. No waiting until after election season.”

Whose strategy will lead to victory? Do lawn signs assure victory? We may know the outcome of the election in March, but that still won’t answer questions about the efficacy of lawn signs.

Or there could be a runoff, and the line sign war could stretch all the way to November.

"We need a woman on the Board of Supervisors who represents the values of her constituents-- and personally understands the problems of other unrepresented groups in the county."

I keep hearing this and I get its a good selling point when there are no women currently serving on the board. However is there some particular issue where the men on the board have failed the women of the community that makes this point compelling?

One example where Jim Provenza showed leadership on an issue that I think would be important to women was in saving the Yolo Crisis Nursery. I remember the debate well because I was in the room when it happened. Another Supervisor dragged his feet on the appropriation claiming it should be done in the ordinary budget process but Jim wouldn't yield on his position of appropriating the money right then when it was do or die for the program. Luckily Jim won the day on the issue and saved the Yolo Crisis Nursery.

Ironically that other elected seems to be on team Deos. Perhaps Deos is running against the wrong man.

Perhaps if Linda had already been in office, there would have been no need to try to save the Crisis Nursery at the 9th hour. The fact it needed saving at all means it was overlooked in the first place.

The reason the Yolo Crisis Nursery needed funding was because the host agency that was running it, EMQ FamiliesFirst, withdrew its funding. It was not overlooked. It was Jim Provenza that led the charge to get county funding to help support the nursery. Other supervisors were reluctant to approve county funds.

Holy Kim, are you part of the Deos campaign? Why go around and spread lies like this?