Wiener’s housing deregulation bill is back!

It's an unfunded mandate for an unproven assumption about affordable housing 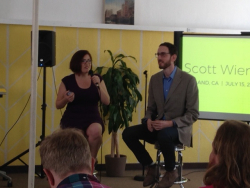 State Sen. Scott Wiener will hold a press conference and rally in Oakland Tuesday/7 to announce that he’s re-introducing a new version of his housing deregulation bill, SB 50. It will need to get through committee and off the Senate floor this month.

Yes, SB 50 is back– with some amendments, and the current opposition of the San Francisco Board of Supes (which means the city’s official position on the bill is Oppose).

The East Bay Times calls it a Zoning Reform Bill, but it’s much more than that. It’s a measure that, in essence, would force California cities to rely even more on the private sector to address the housing crisis.

It does not offer a penny of state money for affordable housing. It doesn’t do anything to mandate that cities limit office development until they have adequate housing for the workforce. It starts and ends with the assumption – unproven and by some accounts just wrong– that greater density will lead to lower housing prices.

SB 50 seeks to encourage more density on transit corridors – but doesn’t provide any state aid for cities that will need to spend far more money than the get from developers to add transit infrastructure (and schools, open space, police, fire, affordable housing or anything else that has to be expanded when you increase the population).

California’s tax structure (mandated by the state Legislature and the likes of Prop. 13) makes it close to impossible for cities and counties to recoup from developers the real cost of serving their projects. The big transit measures tend to be sales taxes, tolls, and fare-box fees – hitting the hardest on the poor and working-class, and barely touching the developers and billionaires.

The supporters of SB 50, including the Yimbys, say that zoning that allows single-family neighborhoods is exclusionary and that it’s far more environmentally sound to build density close to jobs.

That’s true – if the housing that’s built is affordable to the workforce.

But the data is really, really clear – the private market has built plenty of housing in San Francisco that’s not affordable to the workforce, and almost zero that is. And with the cost of land and materials and labor, and the demand for return on investment from the speculators who fund housing these days, there’s no way that private-sector housing will ever be affordable in San Francisco. The minute prices come down to the level that most SF workers can afford, the private developers will stop building.

But longtime housing activists point out that SB 50 most likely would increase gentrification and displacement in vulnerable communities. Wiener acknowledges that possibility, and the current version of the bill allows some vulnerable communities to be exempted for a few years. There is no provision for the state putting up the money to stabilize these communities.

Nor is there any provision for the state to repeal the Ellis Act or Costa Hawkins, which prevent cities from passing effective laws to prevent displacement.

Now: for those who argue that the local housing marked has any relation to supply and demand, I asked Wiener if he is supporting Prop. E, which would link supply to demand by limiting office space until there’s enough affordable housing for the workers. He didn’t respond.

The Yimbys in SF haven’t taken a position on Prop. E either.

The rally, which will also feature Oakland Mayor Libby Schaff, is on the steps of City Hall, 1 Frank Ogawa Plaza.

This article first appeared on 48hills. It has been reprinted with permission of the author.

Davisites, although this article talks about San Francisco, this bill would very much affect us too. It would affect our ability to control the development within our City -- and for what? As Redmond points out, this bill would mainly benefit developers without delivering the promised affordable housing -- the supposed reason for the bill. All evidence suggests that the housing would be for the elite, with no commitment from the state (no funding, no necessary restrictions) to make the housing affordable.

Our state senator is Bill Dodd. You can let him know how you feel about this bill, here:

From article: "I asked Wiener if he is supporting Prop. E, which would link supply to demand by limiting office space until there’s enough affordable housing for the workers. He didn’t respond."

Why am I not surprised that he didn't respond?

The article above also includes a pertinent link, in case anyone missed it. Absolutely "nails" the issue: