City Council needs to stop shooting from the hip 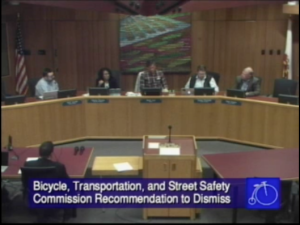 The Council in deliberation. Note that the caption is incorrect; "bicycle" should be "bicycling"

The City Council has a disturbing pattern of making shoot-from-the-hip decisions on the dais without proper deliberation and analysis.  This past Tuesday one commissioner, and commissions more generally, were caught in the crossfire.  (There was also a poor decision on pesticides on the same night).

To understand what happened, you’ll need a bit of the backstory, starting with the November meeting of the Bicycling, Transportation, and Street Safety Commission (BTSSC) – whose members also behaved improperly, as will become clear.

On that day, the agenda included a letter from three members of the BTSSC: Frances Andrews (Vice Chair), Eric Gudz (Chair), and Mike Mitchell (Commissioner, former Chair).  They asked for Commissioner Todd Edelman to be removed from the BTSSC and threatened to resign immediately if he did not, stating that Commissioner Edelman, “shows a lack of respect for the Chair, commissioners, and all involved by consistently prolonging meetings, derailing discussions, failing to yield the floor, and not accepting the decisions of the Commission.”

It is worth noting that two of the letter writers, Chair Gudz and Vice Chair Andrews, were to be leaving the BTSSC after the January meeting anyway, announcing their departure at the December meeting.

Commissioner Edelman submitted a letter for the same meeting.  In that letter, Commissioner Edelman stated: “I sincerely apologize for the times I was clearly out of order and disrespectful to the Chair and other Commissioners. I do not apologize for my extreme passion in making Davis a better place for everyone moving inside and to and from Davis.”  He further stated that he would do his “best to follow the Chair's instructions and not disrespect other Commissioners, or Council and Staff members present.”

Instead of recommending removal, the BTSSC recommended censure of Commissioner Edelman.  The censure indicated that there would be “progressive penalties” if  his behaviors continued.

The December meeting proceeded without recorded incident.  Then, unaccountably, January’s agenda contained a new letter from Chair Gudz, once again calling for Commissioner Edelman’s removal from the BTSSC.  The letter contained no new information, no discussion of what might have happened since November’s meeting – just a bare request.

Our efforts were in vain, however; the Commission voted to recommend Commissioner Edelman’s removal from the BTSSC, after agreeing that Commissioner Edelman was extremely knowledgeable and dedicated, and without presenting any new information about why a dismissal was being considered for a second time.

This is where last Tuesday’s City Council meeting enters into the story, with the BTSSC’s recommendation taken up at around 11:15 PM.  Once again, a number of citizens spoke on Commissioner Edelman’s behalf, citing similar themes as before but also noting the bad process (the lack of time allowed for Commissioner Edelman to change his behavior) and the bad precedent this would set for other commissions.  It was noted that there is nothing in the Commission Handbook that allows for such a recommendation from a City Commission on the grounds that the BTSSC cited.

Former BTSSC Vice Chair Andrews came to the meeting to say that she regretted not voting in favor of Commissioner Edelman’s removal at the January meeting, but she did not elaborate her reasons and she left immediately after her comment.  No one else spoke in favor of Commissioner Edelman’s removal, at one point prompting Mayor Pro Tem Partida to say that she was "a little troubled... that none of the commissioners that want him off are here... For me, I feel that if you are going to ask somebody to leave your commission, you should show up."

Councilmember Lucas Frerichs referred to the BTSSC's process as "flawed," a point with which other councilmembers agreed, with Councilmember Will Arnold saying that it was “not a process”.  Councilmembers also acknowledged the worry about bad precedent and the lack of guidelines for proceeding with dismissal.  Yet the concern was raised that two more BTSSC Commissioners might resign from the Commission if Commissioner Edelman was not removed, leaving the Commission without a quorum[1] – something several commenters (including me) characterized as an ultimatum that the City Council should not acquiesce to.

It is unclear how the vote would have gone had a new idea not bubbled up on the dais – a suspension of Commissioner Edelman for two months, with a perhaps inappropriate condition that he not attend BTSSC meetings at all (perhaps inappropriate because meetings are open to all citizens), together with a mediation/conflict resolution process in the interim.  It should be noted that such a process was something that Commissioner Edelman himself, as well as several members of the community, had urged as a solution instead of removal.

So, now, we are left with an unjustified decision, a dedicated commissioner’s name dragged through the mud, and a BTSSC with no quorum.

This sets a bad precedent for any future commissions who are unhappy with minority voices or the “tone” in which they are expressed.

[1] This is in part because the BTSSC had an open position that had gone unfilled by the City Council since August.

I just have to note that City staff put the wrong name on the screen for the Commission as seen in the screen shot with this article. It's "Bicycling," not "bicycle." A small difference to be sure, but a difference. It is wrong on the Jan 28 Council Agenda, in the Jan 28 City staff report and in Gudz, Mitchell and Andrews October 9 letter.

People make mistakes about language all the time, so maybe it is only mildly notable that three Commissioners on the BTSSC were not very careful about the name of their commission while asking to kick off another member, yet it is notable none the less.

the council also made it clear that they did not want the finance commission to report to the citizens of Davis how far into the hole the city is with respect toward un-funded pensions and road maintenance. Lee is up for re-election and I read into his comments that he does not want the general population to understand how they are spending about $1M on duplicating services for individuals that repeatedly do not follow laws, harbor exotic deceases and generally bring down the aesthetic of the fine community that is Davis in lieu of fixing critical infrastructure.

I see that you wish your readers to believe that the dysfunction on this commission was the Council's fault, as are most things in the eyes of the Davisite. That was a very sticky situation... it is hard to be both a disruptor and a colleague, and sometimes even the best people can't personally sort it enough to be part of a functional Commission. This is not the City Council's shortcoming.

Edubin, I do recognize that this was a difficult situation all around. Nonetheless, in November the BTSSC had laid out a path for proceeding with censure and requiring a change in Todd's beahvior, and Todd had promised to do so. If something happened after that meeting, then it should have been made public. Instead, there was an unexplained and unjustified second vote to dismiss in January. Meanwhile, prior to the City Council's decision Todd himself and several others of us urged mediation/conflict resolution instead of dismissal.

So, I don't want my readers to think that this is entirely the CC's fault. I think that there was bad process from the BTSSC, and that by suspending Todd, the CC in effect endorsed that bad process. So I think there is blame on both sides.