Is the Vanguard Following Non-Profit Law?
New metaphors for new understandings of genomes

Big money in our little election

On Thursday, February 20, the Vanguard Blog again ran an attack on Jim Provenza, trying to link him to an Independent Expenditure group that has run ads supporting him. By doing this Greenwald again seems to want to link Provenza to the controversial Yolo County DA. But let’s look a little deeper.

Greenwald to his credit did reach out to the Provenza campaign and Greenwald confirmed the campaign had no knowledge of the Independent Expenditure Committee Safe Neighborhoods Coalition.

Greenwald states the independent group “has put forward ads primarily on Facebook—though they have yet to file an independent expenditure report, so it is difficult to know how much they have spent.” Then the Vanguard goes on to say, “Independent expenditures must be reported if they exceed $1000.”  And that “By one count, ‘There have been at least ten separate ads. No idea how much they cost.’” That all makes it sound like the group is exerting a considerable effort on behalf of Provenza.

This is disingenuous and intellectually dishonest reporting. Greenwald publishes his attack after campaign finance reporting was due and what do you know, they did file a report – they filed on February 15, 2020 and again on the 20th. Worse, it was not their first filing. They filed on November 5, 2019 as well. All indications are this independent expenditure committee is operating legally and has made all appropriate filings. Greenwald's accusations are demonstrably false.

Has Greenwald followed up with the new information from the filings? Of course not.

Furthermore, Facebook has made it easy to see how much money is being spent on campaigns as it is being spent. Greenwald could have had immediate access to spending amounts had he chosen to look. On Facebook, simply click on the name of the group sponsoring the ad, which appears right at the top of the ad. That will take you to a short page about who is paying for the ad. At the bottom, click “more about the ad.” Or you can go to the Facebook page for the group in question and click on the “see more” link in the “Page Transparency” window in the right hand column and then click “ad library” at the bottom.

Facebook has made it simple and easy to see how much is being spent on ads.

So how much money did the political juggernaut Safe Neighborhoods Coalition spend to support Provenza? The organization has spent a total of $204 over the life of the Facebook page, which was created on December 13, 2019.

(note: all of the Facebook numbers and screen shots are as of 2/22. The numbers update constantly.) 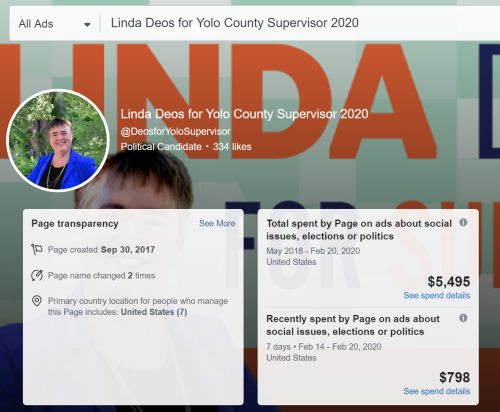 Linda is definitely the big Facebook spender. Provenza by comparison has only spent $631 since May 2018 on Facebook ads.

Or consider candidate David Abramson, who has had a notable impact on the race raising less than $5,000.  Deos has spent more on Facebook advertising alone than the cost of Abramson’s entire campaign.

Clearly the Vanguard has made much of nothing by dedicating an entire article to smearing Jim Provenza because a group that Provenza has no control over spent $204 on a couple of Facebook ads. Heck that’s probably less the Greenwald’s annual Diet Coke budget for staying awake at City Council meetings.

Ironically, Greenwald would have been well served if he had bothered to do the research and look at the campaign finance report on the Yolo County website. It’s really easy to use. He could have slung even more mud since looking at the website we can see that 3 individuals with ties to the Yolo DA’s office and one Republican campaign staffer combined to raise $1,850, and they report spending $1,500 on Social Media Advertising for Provenza. It is unclear how that squares with the much lower amount reported on Facebook; perhaps they are accounting for future ad purchases. In any case, one can imagine how Greenwald would spin this as Provenza being in lock step with the controversial DA, even though Provenza, by definition, has no knowledge or control over the INDEPENDENT expenditure committee.

While I am no fan of the DA myself, I see this donation as right in line with the $1,500 Deos took directly from controversial Davis developers especially since Deos found developers so abhorrent she pledged not to take any money from developers in her 2018 Davis City Council bid.

What is more interesting is that Deos took $11,000 from cannabis growers. They are her single largest donor group. Notably Linda is currently on the Cannabis Tax Citizen’s Oversight Committee. An official Yolo County organization, “To act in an advisory role to the Board of Supervisors in reviewing the annual revenue and expenditure of funds from the tax, including an annual expenditure plan, and reviewing an annual accounting of the previous year’s expenditures.” Yes, Linda’s single largest donor group is from an industry she helps decide taxes for.

By comparison, Provenza only receive $3,000 combined from 2 cannabis growers.

Provenza has his large donors too of course. He received $10,000 from Yoche Dehe Winton Nation who owns and operates the Cache Creek Casino Resort. Provenza has also received more than $8,250 from unions, and $2,750 from local developers ($250 from ARC developer Danny Ramos) and 2,500 from Wilson Vineyards. (Since July 2019, his long career tallies are obviously much higher)

All this money in our local politics frankly makes me queasy. There are any number of angles that a motivated blogger could take to smear the candidates, like the Vanguard has done to Provenza. Obviously the Vanguard has chosen a side.

Notably, Davis City Council member Gloria Partida gave $100 to Deos, and $125 to Provenza and nothing to David Abramson. Come on Gloria! Abramson could put the mony to better use – he took a whopping $0 from any industry group.

“We are down to the wire, and I have just learned that my opponent has a new, secretive PAC working on his behalf.”

This is a clear scare tactic. Is the Deos campaign actually scared of $1,500 in social media ads? Or is it just an opportunistic manipulation? 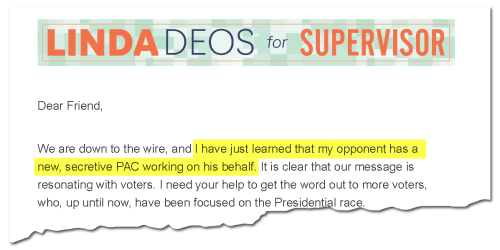 It could just be a coincidence that the Deos campaign chose to run a scare tactic fundraiser the same day as the Vanguard chose to run a similar story even if it seems conveniently timed, but it is also notable that Vanguard Board Member Nora Oldwin is Deos’s single largest individual contributor having donated a total of $1,500 as of the end of the last reporting period.

That even beats out the Nishi developer John Whitcomb who donated $1,000 to Deos on February 7.

If Deos is coordinating with the Vanguard it may be a big problem for the Vanguard’s status as a non-profit as was detailed in Rik Keller’s article this morning.

I am not surprised by the Deos attack piece and the unsubstantiated statement in her solicitation for campaign contributions. Now, many good people support Deos, no question, but she has also aligned herself with the developer/"blue blood" collation that has been in Davis for a long time. These people have few problems with half truths and distortions, and that's unfortunate because many of Deos' ideas are really great. The growth at any cost folks have never met a project they didn't like and they won't be satisfied until they turn Davis into Roseville, building all the way out to the causeway. They say they care about affordable housing, but their track record speaks otherwise.

I happened to watch the UC Davis student forum, which was well moderated. When Deos was asked if she supported Measure R, she said yes, but she had problems with (I'm paraphrasing here) the democratic process where people elect their representatives to to make decisions for them. She said (once again paraphrasing) that we elect our representatives to do the deep research for us whereas citizens react only one the basis of a few flyers. We've heard this argument before. Just go back and look at the pro and con arguments on Measure J. Her comments come right out of that play book. Yet Linda Deos asks the voters to look carefully at her record. In other words the voters should look at her record carefully but they don't have time to look at other issues.

Measure J was brought about because prior City Counsels ignored the will of the voters and pushed through project after project. They ignored the research and project impacts on ordinary citizens and sided with developers almost every time. Guess what? The citizens of Davis decided to do their research for them.

Money, money, money! Why doesn't the Vanguard do a better job of covering these issues and do so in a journalistically professional manner?

1.a group of people leading the way in new developments or ideas.
"the experimental spirit of the modernist vanguard"

Per Colin Walsh's well researched piece, it seems to me what the local Vanguard does is provide "SOS"......