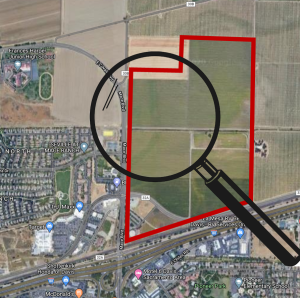 Tree, Recreation and Parks Commissions will now review before the vote; still unclear what sort of project detail will be left out

On Tuesday, I published an article that detailed the fact that despite numerous requests and promises from the City, some key commissions would not be reviewing the Mace ARC Business Park until after the Measure R vote (see article here).  I had also forwarded my article to the Davis City Council.  Early yesterday evening, I received the following email response from Assistant City Manager Ashley Feeney:

The ARC project has applied for a General Plan Amendment, Pre-Zoning, a Sphere of Influence Amendment and an Annexation. These are the land use entitlements that would be the subject of a Measure R vote should they ultimately be approved and referred to the ballot by the City Council. Baseline project features would also be established and memorialized as part of the Measure R vote. These initial entitlements would establish land use for the project area. The project will require future implementing entitlements that have been described on the City's ARC webpage.

The project is undergoing a thorough review process and is being taken to the relevant commissions for the land use entitlements that are being sought. I will note that our team has been in discussions with the City Manager regarding commission review over the last couple of weeks and we have opted to take project to the Recreation and Park Commission and the Tree Commission for their initial advisory input. The project webpage has been updated accordingly. The project would go back to those commissions with the implementing entitlements as noted on the webpage should the initial land use entitlements be approved.

The "future implementing entitlements" referred to in the last sentence of Mr. Feeney's email are what is unknown at this point.  Here is what the City's ARC website says, as of the time that I write this:

Should the Aggie Research Campus project be approved and annexed into the City, the applicant would be required to return to the City for additional entitlements prior to actual construction of any projects.  These entitlements include the details of the construction project.  The following is a list of those possible entitlements.

Note that next week, the project will be appearing before two commissions: the Natural Resources Commission (Monday, Feb 24) and the Planning Commission (Wednesday, Feb 26).  At both meetings, there is an opportunity to learn more about the project and to give public comment.