Why is Darwin so often only shown as an old man with a beard?

For your Darwin Day, here is a selection of some of my favorite Darwin quotes, all from On the Origin of Species, First Edition.  I hope you enjoy them!

The beginning of the book:

“WHEN on board H.M.S. 'Beagle,' as naturalist, I was much struck with certain facts in the distribution of the inhabitants of South America, and in the geological relations of the present to the past inhabitants of that continent. These facts seemed to me to throw some light on the origin of species—that mystery of mysteries, as it has been called by one of our greatest philosophers. On my return home, it occurred to me, in 1837, that something might perhaps be made out on this question by patiently accumulating and reflecting on all sorts of facts which could possibly have any bearing on it.”

It's not all about competition:

“I am tempted to give one more instance showing how plants and animals, most remote in the scale of nature, are bound together by a web of complex relations. I shall hereafter have occasion to show that the exotic Lobelia fulgens, in this part of England, is never visited by insects, and consequently, from its peculiar structure, never can set a seed. Many of our orchidaceous plants absolutely require the visits of moths to remove their pollen-masses and thus to fertilise them. I have, also, reason to believe that humble-bees are indispensable to the fertilisation of the heartsease (Viola tricolor), for other bees do not visit this flower. From experiments which I have tried, I have found that the visits of bees, if not indispensable, are at least highly beneficial to the fertilisation of our clovers; but humble-bees alone visit the common red clover (Trifolium pratense), as other bees cannot reach the nectar. Hence I have very little doubt, that if the whole genus of humble-bees became extinct or very rare in England, the heartsease and red clover would become very rare, or wholly disappear. The number of humble-bees in any district depends in a great degree on the number of field-mice, which destroy their combs and nests; and Mr. H. Newman, who has long attended to the habits of humble-bees, believes that "more than two thirds of them are thus destroyed all over England." Now the number of mice is largely dependent, as every one knows, on the number of cats; and Mr. Newman says, "Near villages and small towns I have found the nests of humble-bees more numerous than elsewhere, which I attribute to the number of cats that destroy the mice." Hence it is quite credible that the presence of a feline animal in large numbers in a district might determine, through the intervention first of mice and then of bees, the frequency of certain flowers in that district!” 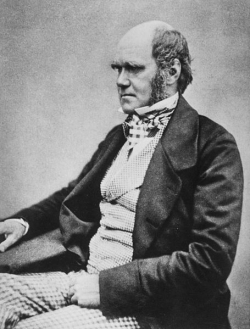 Summary statement of the principle of natural selection:

“If during the long course of ages and under varying conditions of life, organic beings vary at all in the several parts of their organisation, and I think this cannot be disputed; if there be, owing to the high geometrical powers of increase of each species, at some age, season, or year, a severe struggle for life, and this certainly cannot be disputed; then, considering the infinite complexity of the relations of all organic beings to each other and to their conditions of existence, causing an infinite diversity in structure, constitution, and habits, to be advantageous to them, I think it would be a most extraordinary fact if no variation ever had occurred useful to each being's own welfare, in the same way as so many variations have occurred useful to man. But if variations useful to any organic being do occur, assuredly individuals thus characterised will have the best chance of being preserved in the struggle for life; and from the strong principle of inheritance they will tend to produce offspring similarly characterised. This principle of preservation, I have called, for the sake of brevity, Natural Selection.”

Darwin addressing the challenge of the evolution of the eye:

“To suppose that the eye, with all its inimitable contrivances for adjusting the focus to different distances, for admitting different amounts of light, and for the correction of spherical and chromatic aberration, could have been formed by natural selection, seems, I freely confess, absurd in the highest possible degree. Yet reason tells me, that if numerous gradations from a perfect and complex eye to one very imperfect and simple, each grade being useful to its possessor, can be shown to exist; if further, the eye does vary ever so slightly, and the variations be inherited, which is certainly the case; and if any variation or modification in the organ be ever useful to an animal under changing conditions of life, then the difficulty of believing that a perfect and complex eye could be formed by natural selection, though insuperable by our imagination, can hardly be considered real. How a nerve comes to be sensitive to light, hardly concerns us more than how life itself first originated; but I may remark that several facts make me suspect that any sensitive nerve may be rendered sensitive to light, and likewise to those coarser vibrations of the air which produce sound.”

One of the many types of evidence Darwin marshalled for his view:

“Nevertheless the naturalist in travelling, for instance, from north to south never fails to be struck by the manner in which successive groups of beings, specifically distinct, yet clearly related, replace each other. He hears from closely allied, yet distinct kinds of birds, notes nearly similar, and sees their nests similarly constructed, but not quite alike, with eggs coloured in nearly the same manner. The plains near the Straits of Magellan are inhabited by one species of Rhea (American ostrich), and northward the plains of La Plata by another species of the same genus; and not by a true ostrich or emeu, like those found in Africa and Australia under the same latitude. On these same plains of La Plata, we see the agouti and bizcacha, animals having nearly the same habits as our hares and rabbits and belonging to the same order of Rodents, but they plainly display an American type of structure. We ascend the lofty peaks of the Cordillera and we find an alpine species of bizcacha; we look to the waters, and we do not find the beaver or musk-rat, but the coypu and capybara, rodents of the American type. Innumerable other instances could be given. If we look to the islands off the American shore, however much they may differ in geological structure, the inhabitants, though they may be all peculiar species, are essentially American. We may look back to past ages, as shown in the last chapter, and we find American types then prevalent on the American continent and in the American seas. We see in these facts some deep organic bond, prevailing throughout space and time, over the same areas of land and water, and independent of their physical conditions. The naturalist must feel little curiosity, who is not led to inquire what this bond is.

This bond, on my theory, is simply inheritance, that cause which alone, as far as we positively know, produces organisms quite like, or, as we see in the case of varieties nearly like each other. The dissimilarity of the inhabitants of different regions may be attributed to modification through natural selection, and in a quite subordinate degree to the direct influence of different physical conditions. The degree of dissimilarity will depend on the migration of the more dominant forms of life from one region into another having been effected with more or less ease, at periods more or less remote;—on the nature and number of the former immigrants;—and on their action and reaction, in their mutual struggles for life;—the relation of organism to organism being, as I have already often remarked, the most important of all relations.”

“It is interesting to contemplate an entangled bank, clothed with many plants of many kinds, with birds singing on the bushes, with various insects flitting about, and with worms crawling through the damp earth, and to reflect that these elaborately constructed forms, so different from each other, and dependent on each other in so complex a manner, have all been produced by laws acting around us.” 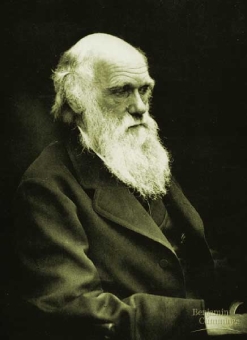 The last sentence of the book:

“There is grandeur in this view of life, with its several powers, having been originally breathed into a few forms or into one; and that, whilst this planet has gone cycling on according to the fixed law of gravity, from so simple a beginning endless forms most beautiful and most wonderful have been, and are being, evolved.”

Love this, especially about the evolution of the eye. Thanks Roberta!