Is the Vanguard Following Non-Profit Law? 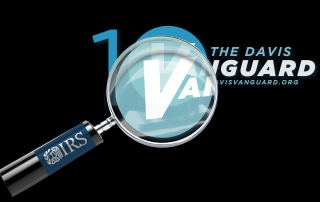 "501(c)(3) organizations are absolutely prohibited from directly or indirectly participating in, or intervening in, any political campaign"

In return for tax-exempt status, a 501(c)(3) nonprofit organization like the Vanguard promises the federal government that it will not engage in “political campaign activity.” If it does, IRS regulations mandate that the nonprofit lose its tax-exempt status and will be subject to other financial penalties [my emphasis]:

“All section 501(c)(3) organizations are absolutely prohibited from directly or indirectly participating in, or intervening in, any political campaign on behalf of (or in opposition to) any candidate for elective public office. Contributions to political campaign funds or public statements of position (verbal or written) made on behalf of the organization in favor of or in opposition to any candidate for public office clearly violate the prohibition against political campaign activity.  Violating this prohibition may result in denial or revocation of tax-exempt status and the imposition of certain excise taxes.

The same IRS guidance goes onto state that

“Certain activities or expenditures may not be prohibited depending on the facts and circumstances.  For example, certain voter education activities (including presenting public forums and publishing voter education guides) conducted in a non-partisan manner do not constitute prohibited political campaign activity. In addition, other activities intended to encourage people to participate in the electoral process, such as voter registration and get-out-the-vote drives, would not be prohibited political campaign activity if conducted in a non-partisan manner.

On the other hand, voter education or registration activities with evidence of bias that (a) would favor one candidate over another; (b) oppose a candidate in some manner; or (c) have the effect of favoring a candidate or group of candidates, will constitute prohibited participation or intervention.”

For a list of examples of the types of political campaign activities by nonprofit organizations that are banned by federal law, see: https://www.nolo.com/legal-encyclopedia/limits-political-campaigning-501c3-nonprofits-29982.html

Even publishing statements supporting or opposing candidates for office written by others is a violation: Federal code states that nonprofits may not “participate in, or intervene in (including publishing or distributing of statements), any political campaign on behalf of (or in opposition to) any candidate for political office.” (see 26 U.S.C. Section 501(c)(3)) https://www.councilofnonprofits.org/tools-resources/political-campaign-activities-risks-tax-exempt-status

It is important to note that this prohibition against partisan political campaign activity is defined as “supporting or opposing a candidate for public office” and is considered different from lobbying or legislative activities. The Vanguard has conducted such political campaign activity against Jim Provenza and supporting Linda Deos on multiple occasions. And it is not the first instance of this type of violation of federal law by the Vanguard:

The situation gets even more shady when one considers the Vanguard’s advocating and support for such issues as the SB50 real estate bill at the state level and the proposed ARC project locally which will be on the ballot in November. In this case, the Vanguard has strongly advocated for this proposed legislation and intertwined this with commentary about candidates for public office like SB50 author California State Senator Scott Wiener and the candidates for the Yolo County Board of Supervisors. The IRS can find that “even an unbiased, neutral questionnaire to be problematic if an organization posts the candidates’ responses on its website, and other sections of the organization’s website advocate for a particular position on the issues mentioned in the questionnaire… by including the organization’s own viewpoint on the website, the organization is telling readers the “correct” position on each issue, and from that readers could then infer which candidates the organization would support.” https://bolderadvocacy.org/advocacy-defined/you-have-questions-we-have-answers/

Finally, while federal tax law prohibits 501(c)(3) nonprofit organizations from supporting or opposing candidates for public office, they may--to a very limited degree--support and oppose ballot measures and other legislation under the federal tax law definition of “lobbying.” However, the Vanguard is doping this to a degree far beyond what is allowable under federal law. The following is a description of the types of activities that fall under the definition of “lobbying”

“for IRS purposes, your nonprofit engages in lobbying anytime it attempts to persuade members of a legislative body to propose, support, oppose, amend, or repeal legislation. "Legislation" means anything a legislative body must vote to adopt or reject--whether a law, resolution, proposal, nomination, treaty, zoning rule, or anything else. It also includes things like referendums, initiatives, and constitutional amendments that must be placed on the ballot and voted on by the general public. Lobbying, then, means trying to persuade a member of Congress, state legislator, city council member, county board of supervisors member, and even a member of a foreign legislature or parliament, to vote in a certain way. It also means trying to help to enact or oppose a law or other item that would have to be voted on to take effect.

However, there does not have to be a specific law pending in a legislative body for lobbying to occur. Lobbying includes support or opposition for proposed laws that are a long way from actually being voted on…”

Under IRS rules, a nonprofit qualifies for tax-exempt status as long as no “substantial part” of its overall activities relates to influencing legislation or carrying on propaganda. While there is no objective standard, the IRS has previously found that if as little as 5% of an organization’ time is spent on lobbying that meets the “substantial part” threshold and is a violation that can result in stripping the nonprofit tax status. Considering Greenwald is listed as the only author on pro development City of Davis land use stories that are run in the Vanguard daily he is clearly spending a significant amount of his time lobbying the Davis City Council.

In conclusion, the Vanguard has violated federal nonprofit law in multiple ways: by conducting partisan campaign activities both directly and indirectly, and by tying issue advocacy to political candidates. It has also violated the prohibition against using a substantial part of its time/energy/expenditures for issue lobbying.

Does the IRS enforce this anymore? I remember when Obama was President the Republicans wanted the head of the IRS fired for attempting to enforce these regulations so the government backed off.

A very good article Rik! My questions: Why did the circa February 2019 compliant to the FPPC (and perhaps for all I know to the IRS) go, apparently nowhere? On what grounds did the FPPC dismiss complaints that the DV had violated its non-profit status in support WDAAC? Are there any plans to take the issue you bring up with respect to the Deos campaign to the city attorney, or for individuals to file a formal complaint with the FPPC? Is that possible and or costly for a group of individuals?

Dan: I wasn’t involved in the FPPC complaint against the Vanguard in relation to the WDAAC campaign. My understanding is that complaint was for campaign finance disclosure violations, which is a separate matter than IRS nonprofit regulation violations.
https://www.davisite.org/2019/02/the-following-was-emailed-to-citycouncilmemberscityofdavisorg-this-morning-dear-members-of-the-davis-city-council-i-am-w.html

Rik - Good job in setting out applicable IRS provisions. But given the vagueness of the rules and subjectivity involved in applying those standards, the conclusion that the Vanguard “has violated” federal law is probably overstated. There’s a lot of wiggle room, for example, in what constitutes “voter education activities” and how “a substantial part” of a nonprofit’s overall activities is determined.

No doubt the Vanguard has sought legal counsel and has been advised on complying with IRS rules. It remains to be determined if the Vanguard has, in fact, violated federal law should the issue be raised at some point in the proper venue.

Eric,
I Would be surprised if the Vanguard has sought appropriate legal council on this. Obviously a legal determination that the Vanguard is violating the law would need to come from a court; but what we can all see and decide for our selves is the Vanguard is not an ethical organization.

Eric Gelber: thanks for your comments. I am obviously not the entity who would make a determination on these matters. I am merely stating an opinion on violations that appear to have taken place. But the evidence seems pretty overwhelming. And the Vanguard’s repeated actions are right in line with the exact types of examples that both the IRS and nonprofit law experts provide.

It seems doubtful that the Vanguard has sought and received appropriate legal advice on these matters. If that were the case, there would be no gray area in their actions up for debate. Their one attorney of record, for example, previously demonstrated his abject ignorance about IRS nonprofit information disclosure rules. See: https://www.davisite.org/2019/05/davis-vanguard-irs-disclosure-problem.html

the only way to find out is to take legal action. Accusations are nothing. Money, mouth is? Bit tired of the accusations, but would love to see a showdown!