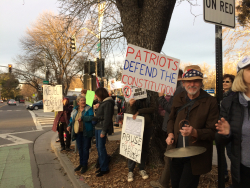 On Wednesday evening, nearly 100 people showed up (on short notice!)  at 5th and B to protest the failure of the U.S. Senate to call witnesses, much less convict, Trump for Abuse of Power or Obstruction of Justice. 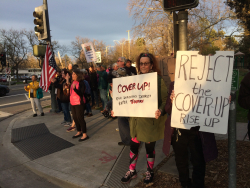 Photos of the Davis crowd made Rachel Maddow show....along with photos of the other 270 rallies across the U.S.

Later that evening, IndivisibleYolo and Sister District CA-3 previewed their new volunteer HQ on Olive Drive near Rocknasium, the first step of Blue Wave 2 campaign to flip the Senate and Presidency red to blue in November 2020.  Arizona races are the target Red to Blue area for Davis.   Over 60 people showed, celebrating that the two groups have together raised over $14,000 to fund this office space.

Last week there was also a Davis House party run by the group “The Verbs” to raise money for Democratic Senate Candidate for Arizona, Mark Kelly. It reportedly netted over $70,000.

- Submitted by a Davisite reader.