Over $200,000 each for Kitchen Remodels During these Disastrous Times? - You Have Got to be Kidding Me !!! 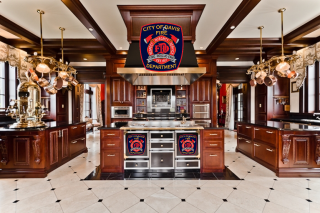 Davis and the entire world are in the midst of an economic meltdown for which nobody has a clue when it will end. Locally, Davis will be hardest hit by the huge loss of the transient occupancy tax (TOT) collected by our now near empty hotels and motels and the plummeting sales tax caused by the collapse of retail and auto sales. This will cost the City many millions in lost tax revenue just as the City's revenue needs will likely surge due to humanitarian costs.

Yet in the midst of this obvious economic calamity and according to a Consent Calendar item on this coming Tuesday's Council meeting agenda, Staff is asking Council for approval to spend another $43,000 on local architects Indigo | Hammond + Playle Architects (Indigo Hammond) for design/engineering of heating, ventilation, and cooling (HVAC) system upgrades and disability access improvements as part of the planned complete remodels of two kitchens in Fire Stations 31 and 32 in Davis. The two kitchen remodels are expected to cost over $422,000 for the remodels and this may not even include the additional costs for HVAC system upgrades and disability access improvements at one of the fire stations.

But get this, the kitchens are reportedly working fine right now!

If true, this is a foolhardy discretionary spending decision that the City is considering in light of the public health and economic perils we currently face. And this is from a City management that promised us that they were laser-focused on cost-containment when they asked us to renew the existing 1% sales tax on the recent March ballot less than 3 weeks ago.

As part of the City's approximate $61,000,000 budget for FY 2019-2020, revenues of $16,226,000 are expected from sales and use taxes levied and collected in the City. Many pundits expect this to fall by a minimum of 50% and possibly 75% on an annualized basis during the duration of the current ongoing Corona virus crisis. This could result in an annual shortage of as much as $8,000,000 to $12,000,000 if the economic damage is extended for a year into the future. This would be disastrous for the City government's economic well-being.

Yet in the Consent Calendar item scheduled to be considered this Tuesday, Staff is asking Council to authorize an additional $43,530 on top of the $42,600 they have already award to Indigo Hammond for the kitchen remodel redesign. Apparently, however, this planned remodel is NOT because the existing kitchens do not work now. I have been told they are completely usable by one public safety employee who spoke under a promise of confidentiality.

This is somewhat substantiated in the text of the Staff report submitted to Council as part of this authorization request (see copy at the Staff report end of this article). In this report, Staff does not explain why this remodel project is a priority or urgent necessary capital improvement project. Nor do they even disclose if the existing kitchens are functional or not or what the expense would otherwise be to repair or replace individual appliances if they are not currently in working order or to do partial upgrades or maintenance of any necessary urgent repairs needed at the fire stations. The only justification of the proposed kitchen remodel projects given by Staff in their authorization request to Council is as follows:

"The Fire Station 31 and 32 Kitchen Remodel project was created based on the existing condition of the kitchens at the respective fire stations. Major rehabilitation of the fire stations is not anticipated in the near future, but maintenance and minor improvements are needed for the existing facilities….During design of the kitchen remodel project, it was identified that the heating, ventilation, and air conditioning (HVAC) system in fire station 31 needed to be reconfigured to improve air circulation in the kitchen, and additional improvements to meet the American’s with Disabilities Act (ADA) are required to meet the building code. The additional work was not in Indigo’s original scope, and additional meetings on site, construction support, as-built drawings, and design work would be provided by Indigo with Amendment 1"(Emphasis added)

Really? That's it? So Staff is proposing to spend over $422,000 for two complete, extensive, and hugely expensive kitchen remodels because "maintenance and minor improvements are needed". Staff does not say if any of the major appliances are not working or whether there are electrical or plumbing safety-related problems or if there are mold or peeling paint or structural rot in the facility. In fact, they do not give any indication at all that this need is a critical infrastructure improvement. So it appears that this expenditure is clearly in the "nice to have" and not in the "need to have" category of spending prioritization.

As such and it light of the current financial crisis, it is highly inappropriate of Staff to even request authorization for this seemingly exorbitant amount for remodel of only two kitchens that each serve only a handful of fire personnel on duty at any one time.

In the Staff report they disclose that the current expected project costs, including the proposed increase award to Indigo-Hammond, will total  $422,00.

It is not clear in the Staff report if this cost includes the increase in construction costs for the additional ventilation system and disability access upgrades. It would seem not to be the case since the apparent requisite design and engineering for the project to accurately price the construction cost for the HVAC and disability access modifications has not even been done yet. If so, the total project cost could soar even higher. Nor does the Staff report explain why disability access improvements to the kitchen are required since there are obviously no fire department personnel with such disabilities who would ever be using the remodeled kitchen facilities.

While not rising to the level of $500 hammers procured by the US Department of Defense in the past, approval of this project by our City Council will undoubtedly gives taxpayers an obvious impression of profligate and reckless spending.  Everyone I have otherwise informally talked to about this proposed expenditure was incensed and outraged that our local government would even consider moving forward on this discretionary project while so many of our residents are now scrambling for rent, food, and gas money or for other basic needs.

Whether the old saying that "Nero Fiddled while Rome burned" is true or not, clear analogies can be drawn to the current actions by our City management in pursuing this ill-timed and unnecessary expenditure while our municipal fiscal house is figuratively burning. It seems from this proposal that Staff has absolutely no sense of the financial crisis the City is facing and the extreme financial stress that will be felt by the City in the immediate future. Perhaps the problem lies in the fact that our City employees are somewhat isolated from the financial calamity a major portion of our population is feeling right now. All City employees are now working from home except for fire and police personnel and those providing critical City function such as utilities operations. And all are still paid full salaries and benefits while working from home.

Whatever the reasons, our City Council must stop this irresponsible expenditure of funds when we have so many of our citizens out of work and our municipal income is expected to plummet.

And I would go so far as to say this is a total waste even if times were good. These amounts for kitchen remodels are absurd even if remodels were needed let alone if they are working fine, or if not, only what needed repair would be plenty. This is why people vote no on tax and bond measures, because behind the scenes waste, waste, waste. Can you spell ROADS, just to name a most obvious need.

My goodness, this was a "Consent Calendar" item? While, for personal/family reasons, I certainly value what our Davis firefighters do, the optics of this funding at this time seem all wrong.

As Mr. Pryor says, our economy is free falling and we must tighten belts. At a time when a lot of people are wondering how they are going to pay their property taxes due in three weeks, this kind of expenditure is probably not going to be credible to many, many tax payers in Davis.

I'd rather see a portion of the money spent on a major flu campaign done in collaboration with the Yolo County Health Department, Communicare, and the local hospitals and physicians ...... now that would be an investment with a positive return because slightly less than half of American adults get the flu shot and the number of cases of illness, hospitalization and death are much much higher this season to date than from the (novel) corona virus.

Can't imagine the City Council would want to move forward with this project at this time. I know they are scrambling with all kinds of urgent matters right now and are having a hard time answering their emails. But this public input is important and timely. (Thank you, Mr. Pryor).

Perhaps this item could be funded later and with a greater or more compelling justification.

I would be more than happy to reconsider this proposal in a few months when we see what actually happens to the City finances. Approving such an expensive Kitchen makeover now seems irresponsible.

If this where a budget for mask an protective gear - No problem.

If this were a budget to pay for more overtime - No problem.

If this were a budget to help with child care wile kids are home from school and we need our first responders at work - no problem.

If this were a budget for any immediate need I would be 100% on board, but that is not what this is. This is a very expensive kitchen remodel of functioning kitchens. This can wait a few weeks or months until we have a better sense of were we are.