Pacifico Dumpster Fire and Other Problems 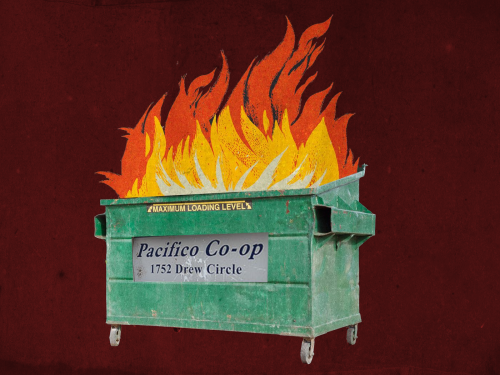 You may have heard that on Monday 2/3/20, there was a fire in the dumpster that belongs to Sharps and Flats apartments. This fire was directly on the other side of our back yard fence and was 20 feet from our home.

The smoke filtered into our home making it difficult to breath. Other residents in the area noted smoke as far as Pole Line and Drew Ave north of Cowell. Others said they stayed indoors and did not let their children go outside.

Since the fence has gone up round Pacifico separating it from the bike path, much of the activity that has historically take place on the bike path and Evergreen Court and surrounding areas, is now highly concentrated in the shared parking lot between Pacifico and Sharps and Flats.

The video cameras are contributing by pushing many Pacifico residents and affiliates to do their drug deals and threatening arguments and dangerous activity in the shared parking lot where they are off Pacifico cameras. The parking lot is behind my house and I have heard arguments and contentious drug deals, individuals being coerced into doing things they don’t want to do, gun shots and now we have fires.

In his State of the City address, Mayor Lee indicated that as a whole, “we want to become more resident focused “ and “as we make mistakes we own up to them.”These are fine words and nice goals, but they have yet to be matched with serious actions.

If there is an area where the City’s past mistakes have negatively impacted residents, it is in South Davis. Residents near Pacifico specifically, have  lived with serious problems caused by the City’s mismanagement and neglect of their  property and tenants on a regular basis for over 8 years resulting in a host of  inappropriate problems.

The burden has been heavy to bear for a very long time. Residents and renters have been more than patient and accepting. We have been heartfelt and helpful, accommodating, understanding and forgiving, but evidently that is not what helps or improves people's lives in a tangible way. We need meaningful action now that will address these dangerous situations for everyone involved.

Owning up to mistakes has to involve more than just acknowledging those mistakes, it requires actually fixing them.

At a minimum, I would ask that you:

This community that I love and care about, cannot afford to be neglected  any longer. Considering what the community in South Davis has endured and is still enduring, the City should have compassion and do all that’s necessary to bring peace, functionality, neighborly trust and safety back to our residents.

Sounds like a serious, ongoing problem (in and around Pacifico). However, wouldn't it also create the same problems at other locations (e.g., as suggested in the article)?

None of these types of facilities "lock" residents or visitors inside, or (more-to the-point) control what occurs outside their premises/buildings. Perhaps that reality is the root of the problem, and the related concerns.

Wow, an actual dumpster fire, not even a metaphor. That's almost too good to be real, not that it wasn't. Is there an idea how it was connected to Pacifico?

"I have heard arguments and contentious drug deals, individuals being coerced into doing things they don’t want to do, gun shots and now we have fires."

Um . . . I think you buried the lead here . . . "gun shots" ??? Was that, like, reported to police and investigated? You can't just list gunshots in a list with arguments and drug deals and just move on.

I don't understand what the respite center location has to do with the rest of the article, or the location of Safeway. It is one full mile walk from the respite center entrance to Safeway, over the freeway, and quite a bit further to Pacifico. Seems a complete non sequitur.