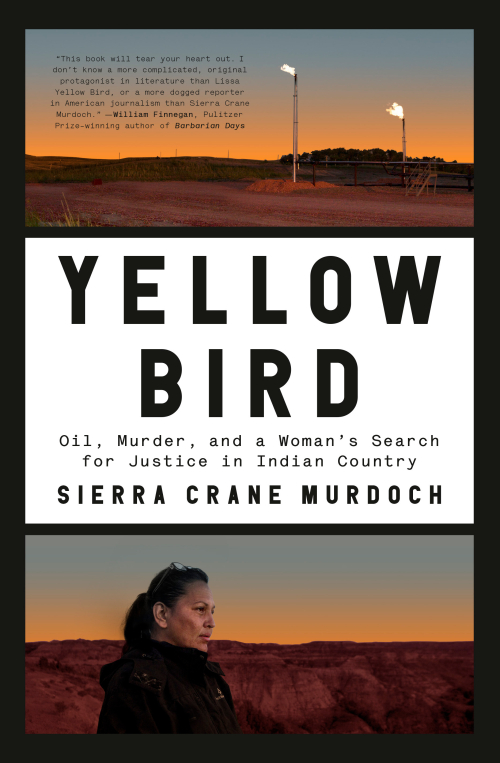 A book review by Nathan Hendrix

In 2012, truck driver Kristopher “KC” Clarke disappeared from the Fort Berthold Indian Reservation in North Dakota.  Yellow Bird:  Oil, Murder, and a Woman’s Search for Justice in Indian Country by Sierra Crane Murdoch is the story of his disappearance, the reservation he disappeared from, and the woman that spent years searching for him.  Lissa Yellow Bird has led a colorful life; she has struggled with addiction, worked as a stripper, and spent time incarcerated.

When she heard about KC’s disappearance, she decided it was up to her to find him.  This search became an obsession that damaged her relationship with her children and put her in conflict with the powers that be in the reservation.  Clarke worked as a truck driver for a company that hauled water to and waste water from drilling sites.  He had told people he was going to visit family, turned in his company credit card, and then disappeared.  He didn’t take any of his belongings and his truck wasn’t found for months.

Yellow Bird is a glimpse into a culture that not many have experienced and clearly shows the danger that lax regulations pose to people and the environment.  The history of the reservation is fascinating and the damage done by oil companies is horrifying, but the book drags when the author delves too deeply into Lissa’s family life.  I enjoyed Yellow Bird and I look forward to Ms. Murdoch’s next book.

Nathan Hendrix is an avid reader and paramedic who grew up in Davis, but now lives in Rocklin with his wife and daughter.