Missing my DAM workouts and my DAM teammates
U-Mall proposal inviting final input to Planning Commission this Wednesday, May 27th 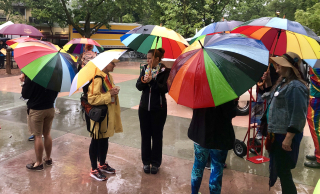 Davis Pride Festival attendees huddle under rainbow umbrellas at the May 17, 2019, event. The 2020 festival has been canceled but there are other ways the community can share the spirit during June is Pride month. (Wendy Weitzel/Courtesy photo)

(From press release) In 2019, it poured rain on the May 19 Davis Pride Festival. But something amazing happened when the rainbow umbrellas came out. Community members huddled closer and supported each other.

In 2020, we all can be those umbrellas. While we can’t gather physically, we can huddle virtually to support each other in that same spirit, said Gloria Partida, founder of the Davis Phoenix Coalition.

Members of the Coalition, which organizes Davis Pride, were disappointed the pandemic forced the cancellation of its annual festival, originally scheduled for May 17. However, they are getting creative with June is Pride Month 2020 – celebrating virtually and visually. DPC is discussing ways to observe and interact that still connect us during physical separation.

Watch for rainbows all around Davis in June – on flags, rocks, masks and more. Every Saturday from 8-1, patrons may purchase rainbow masks at the Davis Farmers Market, 301 C St. The masks, sewn by Debra Ariola, are inspired by the late Eva Dopico with funding from Dopico’s husband Chris Jones. Profits go to the Davis Phoenix Coalition. If you can’t make it to the market, call or text Ariola at 530-400-3652 to arrange a purchase.

Follow Davis Pride on Facebook as we encourage residents to share their rainbows and win prizes. As restrictions lift, look for a rainbow bike ride. Area residents are asked to make rainbows to hang in their windows, decorate their driveways and sidewalks with chalk rainbows, and share images on social media with the hashtag #DavisPride2020.

The Coalition encourages people to shop local and support its business partners. Local business owners may show their support by posting a rainbow flag in their store window in June. Email gloria@davisphoenixco.org to acquire a flag, and DPC will mention the business on Facebook.

“For those of us in communities that struggle with acceptance, these times can be tough. For our Asian neighbors, stigma is rearing its ugly head as it has historically for minority groups during other health outbreaks,” Partida said.

Those in the LGBTQ+ community are familiar with this, having navigated the AIDS outbreak. Davis Pride Festival Director Sandré Nelson said, “As a community that understands the stigma associated with an outbreak, we can lead the way to the rainbow in the rain.”

While everyone is experiencing hardships during this pandemic, the LGBTQ+ community is especially susceptible because they are often in frontline jobs, struggling with unemployment and access to healthcare. They rely on the support of allies, but miss out on vital community connections. The Davis LGBTQ+ Youth and Yolo Rainbow Families in-person support groups have been canceled. However, DPC is offering even more frequent virtual meetings to check in and connect.

This segment of the community already feels marginalized and isolated, Partida said. LGBTQ+ youths may find themselves at home with family members who struggle with accepting them. “Remember to always be an upstander and call out intolerance. Now is the time to support each other on social media, and through texts, phone calls or written notes.”

The loss of the Davis Pride Festival is also a lost opportunity for fundraising. To donate or learn more, visit https://www.davispride.org/. Follow Davis Pride on Facebook and Instagram.

Davis Pride is produced by Davis Phoenix Coalition, a nonprofit that works to foster diversity, eliminate intolerance, prevent hate-motivated violence and support LGBTQ+ youths. The coalition was founded in the aftermath of a 2013 anti-gay attack on Davis resident “Mikey” Partida. Proceeds from Davis Pride support the coalition’s anti-bullying campaigns, and outreach with area police departments, churches and schools.