Responsibility in the age of Covid-19

County's decision shifts the responsibility from government to individuals 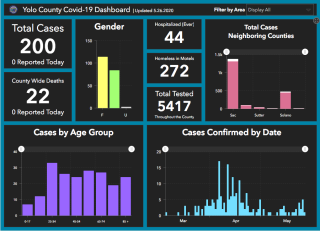 I've been contemplating the rapidly shifting landscape in Yolo County heavily this week. Not just Yolo County, but in California as a whole. Over the last several months, the Covid-19 pandemic brings me to my data roots and plagues my change management heart. I've spent time using data to influence healthcare policy and over the last few months, I have immersed myself in the data on many levels. I have been helping people in my community understand the data and data trends so that they can make informed decisions for themselves, their families, and communities. I've felt an increasing need to inform more people as I've watched things beginning to unravel because of the balance between economy and preservation of life. A balance that is precariously tipping in a direction that frightens me.

When I appealed for prudence to the Board of Supervisors in yesterday's meeting, it was my desire that the Board would hold steady to the pressures of those screaming to open up and would take a week to evaluate the most current data available. Yolo County had 198 positive cases while the meeting was held. But data has a lag. It takes a person getting exposed, getting ill, getting tested, and then getting the result read. By the time the data hits the dashboard, it is an indicator of where the community was over a week ago. In the past week, the situation around us changed. Other communities loosened their restrictions and even communities in Yolo County made choices that were questionably within the County ordinance. I personally saw evidence of large gatherings and violations of mandatory masking. As you read this, I am willing to bet that you just thought of your own observations of this. From an organizational perspective, the loosening began last week and against the orders and guidelines in place. So those behaviors will be reflected in short time. In fact, I believe we are already seeing it.

The Public Health Officer notified of a hospitalization in the last three days. On Sunday, we added 4 positive cases. On Monday, we added 4 positive cases. And Tuesday, 2 positive cases. That leaves us at 200 total cases and a current hospitalization. Despite the low counts, we cannot dismiss that we also had 22 cases result in deaths. It also reflects that 5% of the positive cases are in the last 3 days. 200 total cases over a span of 3 months. 10 cases over the last 3 days. The data for the next week is vital. The loosening of restrictions will free those who follow the authority of government. And the picture may become frightening quickly. Things look good. Until they don't. This virus is rapidly replicating. It gets out of hand quickly. On the Royal Princess voyage of less than a month, 20% of those aboard eventually became sick.

California has the potential to be the next New York. We have 38 million people in our state. We are barely managing the outbreak in LA and we were the US model for what is effective. We were too good at curve flattening. People forgot WHY our numbers were good. It was because of the strength of our wills, the belief in the common good, and the leadership we have had to consider others and to stay home. I was pleased that the masking requirement was never up for discussion as to be discontinued. So as we open up, and the responsibility shifts out of governmental control, it shifts to us. I've been advocating to my friends, colleagues, and my family to continue on and hold steady. Now I encourage you to do the same. Lower risk is outdoors. Avoid people. Maintain your space. 6 feet is an arbitrary number. It is best to stay home if possible. We are not in a better place than we were before. Arguably, the virus is more widespread than it was before and that is while we have been stopping its spread with active measures. Personal responsibility is the phrase of the day. Protect yourself and your family and friends and mitigate the spread on your own. The County didn't fall on the side of health, but you can. We can hope that they will have the strength of will to intervene when we need them to. I fear that this might be sooner, rather than later.

Thank you so much for this post. I have been so disappointed with most of Governor Newsom’s decisions over the past week, and now I am disappointed and very surprised by the decisions made by the Yolo Board of Supervisors. The numbers do not justify the degree of opening up that is now permitted, and certainly not the speed — without waiting to see the effects of each change before making the next one. Yes, I have been saying for about a week that the only place that will be safe by August is New York City, because they understand how horrible this can get (and how quickly) if people aren’t adequately distanced. Very scary.

You have really highlighted the importance of being prudent (it IS a virtue!), of well thought out health policy and of personal responsibility.

Regardless of what our officials do, we can each contribute to health by maintaining good health habits including washing hands, using face coverings, social distancing, eating and sleeping well, and maintaining peace in our households to the best we can. These are stressful times.

And can I also add, the civic opportunity to get tested for the CV? It is free, it is local, and it is convenient. When you get tested, you learn your own status but you also contribute to the pool of information about the community in terms of incidence and prevalence of the virus.

Yes, the test is a "moment in time" test, but so is the blood pressure test and nobody turns that down due to the fact that it might change, right? We do it repeatedly so that we can monitor our status and that is what we should do with the CV test.

Wishing all a happy and healthy June.... we will get through this... together.